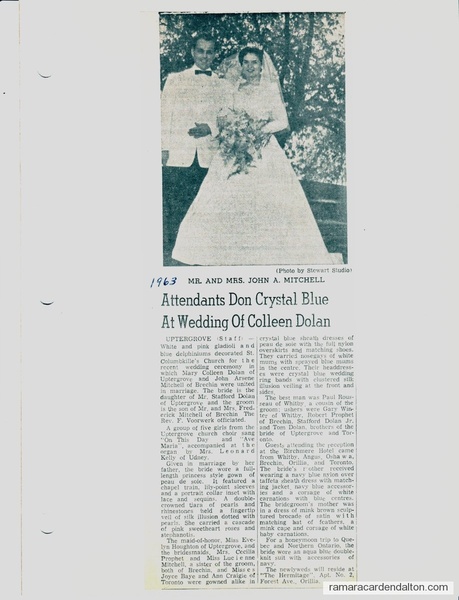 The story of Longford Township is one of tall pine timber, crashing logs on flooding waters, sturdy lumberjacks and raging forest fires.  It is the story of the South Ontario lumber industry itself.  It began back in May 1865 when all the land forming the township was sold to the Canadian Land and Emigration Company.  Another historical move took place in 1867 when John Thompson, a lumberman, purchased it for $33,000.  In 1900 the pine timber limits almost exhausted, the land was purchased by the Standard Chemical Company which sought the remaining hardwood in the country.

With the hardwood limits almost gone, the land was bought by a US syndicate for use as hunting and fishing area.  This syndicate now owns it.

It is reported that at the present time the provincial government may buy back the complete township and establish a provincial park in its rugged interior.

The township has had a colourful history and it is likely it will have an eventful future, but the time of John and William Thompson and the Longford Lumber Company was its golden era.  It supplied the life blood of a lumber empire.

Born in Scotland in 1831, John Thompson came to Peterborough in 1885 and settled there with his bride.  He soon developed trade in square timber, rafted down the Trent River and on by the St. Lawrence to Quebec.

In 186, he became interested in the pine in Longford Township and after spending a month with an old Indian, John Young, in the area, he bought the land in a sale in the old Queen’s Hotel.  His partner in this venture was Melville Millar, the first Mayor of Orillia.  MR. Thompson later took over the whole company.

The same year, Maxwell Hall, a friend of Thompson’s in Peterborough, joined the company, working as secretary-treasurer.

The mills were placed on Lake St. John and in the village of Longford other mills soon grew around them.  When John Thompson Died in March 14, 1881, the company was left to his son, William Thompson.

The Longford Lumber Company operated about five lumber camps in Longford Township.  The timber was cut and towed to the Banks of the Black River.  In the spring the logs were floated down river in a wild rush of water which raised the level of Lake St. John by six feet.

It was at this time that the workers of each lumber company clashed.  It was a race to get this first water in the spring.  Any company which missed it would have to take the next rush of water which wasn’t so strong and left open the many shoals and rocks to jam the logs.

Men of the McPherson, Tait and Mickle and Dyment lumber companies competed with the Longford men for this water. Mountains of logs were stamped, rolled off the banks of the river in the spring and mixed with logs of other companies operating in Ryde, Dalton and Digby Townships.

More than once, Mr. Thompson was called from the mills on Lake St. John to help quiet down a lumberjack war.

With the aid of dams, the men were able to guide the logs on their long journey to the lake.  A canal was cut from the Black River to Lake St. John by men with shovels.

At Lake St. John, the logs were separated by each company.  The Thompson logs were taken across the lake to their mills, there along with the McPherson’s,  Tait operated a mill in Orillia and others to Belle Ewart on Lake Simcoe.

As there was no boat as yet on Lake St. John, the men had a unique way of transporting the log booms.  A row of buoys lad across the lake and a barge was tied to the first buoy.  A sturdy rope was tied to a log boom behind and a horse on the barge would wind up the rope, pulling the boom to the barge.  From there the barge would be moved to the next buoy and so on across the lake.

Later a steam boat was launched on the lake. A tramway was built across the narrow stretch of land between Lake St. John and Lake Couchiching.  The logs were taken over the tramway for a small fee and scaled on the way. Huge pile of timber stretched between the two lakes and as many as seven steamers, passenger as well as freight plied the waters.  The fare was 25 cents to Orillia. Mr. Thompson operated the Enterprise on the lake.

It was a rugged life in the township and much of the time the men were cut off from the mills. A supply depot for the Thompson camps were operated at Uphill where now the Glimour farm stands. Teamsters would operate steadily between Longford Mills and Uphill to build up the supplies there as sometimes even Uphill would be cut off.  The 50 to 60 men at each of the five camps would make their way to Uphill for supplies. Sometimes in the winter months, six or seven men would leave a camp with a team of horses and literally shovel their way out to Uphill.

At other times of the year the men at the camps could make their way along the trails on the Black River to Longford Mills.  Often they went to the more northern camps by way of Washago, Cooper’s Falls and Lewisham.

There were four mills on Lake St. John, two owned by Thompson and two by McPherson.  A fifth mill built by McVinty Company blew up, cause unknown.  The two Thompson mills boasted smoke stacks 150 feet and 100 feet high.

Longford Mills had a volunteer fire brigade, a band and a community hall.  Geneva Park, now a YMCA Camp was set aside as a recreation center for both the Indians and the white people.  Deer, goats, ponies and amusements such as water chutes for bathers and a miniature railway made Geneva Park a happy meeting place for all.

Near the park was the White House, winter and summer home of the Thompsons.  It was built by John Thompson and his family and was worthy of its distinguished name.

Near this home, wrecks of the old steamers which plied the Lake Couchiching can be found today.

When the timber limits were almost exhausted in the township, forest fire swept through taking more trees than Thompson Company had ever taken.  The smoke was so dense that it blanketed Orillia and light had to be turned on in the middle of the day. (Possibly the fires of 1881  FL)

The hardwood was taken from the township to Longford Mills and was baked, extracting the acetate of lime and forming charcoal.  Mr. Thompson remained as director of the Chemical Company and of Canada Wood Specialties and later established the White Lumber Mill there.  He died on July 20, 1928.  The township still remains much as it was in those days.  It is still rugged and the few roads into it are almost inaccessible.  While the towns and the villages it helped have grown an become modernized with the rest of the world, the township itself has progressed little.  To those who know the area and have worked in it, possible government ownership and the formation of a provincial park seem fitting.

LUMBERING OPERATIONS This is a very bust season at this point.  There is life and activity like unto a full grown village or town.  The large lumbering firm of the Longford Lumber Company are busily engaged getting supplies from Toronto, Montreal, Lindsay and Peterborough to supply their camps in Longford.  They purpose putting about 300 men and 50 teams at once and their wood manager, Mr. James McRae, are very busy making all the preliminary arrangements.  In addition to their already extensive business this company have found it necessary to erect a fine store here and they are filling it with well selected and well purchased stock of general goods of the best quality, which will be sold cheaply.  All kinds of produce, cattle, hos etc. will be continued to b

LUMBERING OPERATIONS This is a very bust season at this point.  There is life and activity like unto a full grown village or town.  The large lumbering firm of the Longford Lumber Company are busily engaged getting supplies from Toronto, Montreal, Lindsay and Peterborough to supply their camps in Longford.  They purpose putting about 300 men and 50 teams at once and their wood manager, Mr. James McRae, are very busy making all the preliminary arrangements.  In addition to their already extensive business this company have found it necessary to erect a fine store here and they are filling it with well selected and well purchased stock of general goods of the best quality, which will be sold cheaply.  All kinds of produce, cattle, hos etc. will be continued to be purchased by them and paid for in cash or goods.