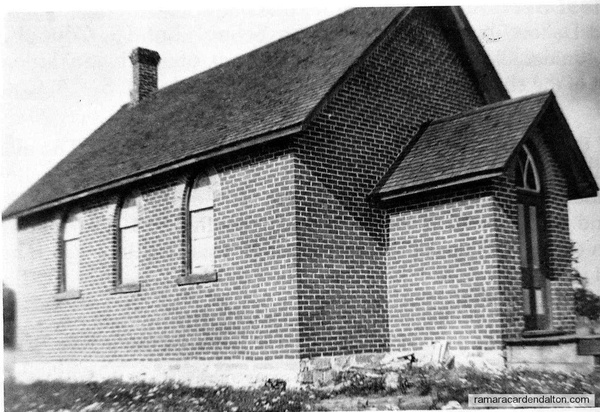 The Buchanan Clan was once very numerous along Eastern shores of Loch Lomond. Their history connects closely with Robert Bruce. In 1296 they refused to sign bond of fealty to Edward 1, so fought in Bannockburn. Like the Graham Clans, they remained loyal to the Stuarts for which they finally (many of them) were forced to take up domicile in County Antrim, Ireland at Ballymond. Many Presbyterian Scots also moved to Antrim and Tyrone.

The Buchanans consistently exhibited style and good taste and possessed fine features and skin. Albeit they had traces of vindictiveness and frankness not always accepted by others.* Editers note–(nothing wrong with that )

Their crossing the Atlantic about 1820 meant enduring a trying, lengthy passage via a small boat to Quebec, then by Rapids Boat then by Durham Boat to Cobourg and by lake boat to Muddy York. Evidently publicity guided them to Cedar Creek near Port Perry, where Grahams, Days and Jarrets had gathered. All attended Presbyterian Kirk which explains why all four families lasting loyalty to the Dalrymple Church’s efforts.

The eldest Buchanan was Thomas and his wife Ann. The Days came to Dalrymple first but in order the other families followed, possibly Albert Day brought his wife Elizabeth Buchanan along with his children Joel, Ellen and Mary Ann about 1863. Naturally relatives visited them and later moved north.

Andrew Graham married Ann Buchanan in 1851 when she was 17 and he 32 but the lasting affection between them was broken when she died in 1880 from over effort of spinning, weaving and assisting a niece, Annie Graham to make all the clothing for 5 sons ETC.

George Jarret married Mary Buchanan (youthful too) first domiciled at Quarter Line in the Days field where he built for the community – barns, homes, pumps etc. including caskets.

Walter Hicks married Martha B. and took what became the Graham’s property out of Crown Lands sometime in the early 1870’s because the Grahams purchased the small clearing and log house etc. in 1877, after selling a nice farm at Manchester- a great mistake as all 5 sons were not farm-minded. Even James would have been successful in public or business life and not so wearied frequently from over strenuous life.

Jane B. never wed and lived on at Cedar Creek with brother John. Jane demanded a term at Whitby Ladies College where her instinctive elegance was primed. Her extravagance bankrupted poor John and at her death he moved into the Day home, Elizabeth widowed early.

A brother Thomas Dack had moved to Tory Hill with Edward Buchanan who married Catherine Dack. Edward later moved to Carnduff Homestead where Will Day, Brother of Joel and the Plews family were. Both families had many capable descendants. Brother Thomas B. remained a bachelor, I think and long years later visited Albert Graham in Toronto, later passing away with cancer.

Mrs. Geo Fox, Aunt Alice to many, visited with her Uncle Ed Buchanan, with Ross in 1917. A grandson of Edward visited the Grahams for 2 days in 1970 in Quest of B. and D. family data and trees for his contemplated family history.

One of the aforesaid Jane’s extravagances was a Cameo brooch for each sister. Carolyn Johnson Ironsides of Washago has inherited her Grandmother Mary Jarret’s brooch. The rest????

Great Aunts Mary and Margaret, also Great Aunt Ann became very fleshy and a burden it proved, what with weight to carry and final dropsy which proved fatal. All Buchanans appeared too hearty of good food. The women spun, wove, braided hats etc., etc. – no wonder they wore out early.

Younger generations can be justly proud of their Buchanan blood strain and talent. Music appeared to be a general gift and all knew words of Sankey hymns.