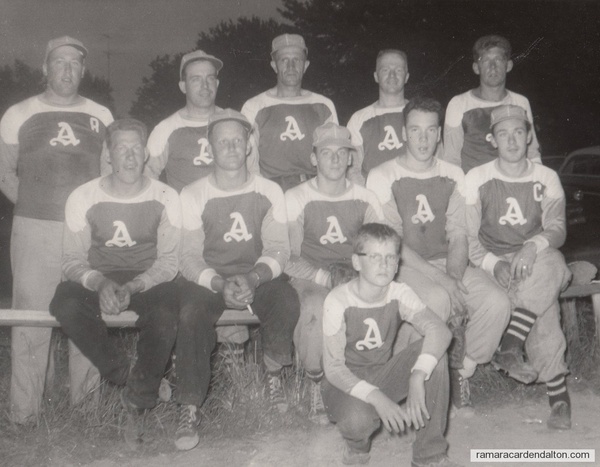 This copy property of Ramaracrdendalton history on line

At a recent meeting of the Women’s Institute at Gamebridge, when Historical Research was the subject, Mrs. S. J. Furniss read the following paper on the history of School-section No. 2, Mara:–Rmcd.com

The early settlers of this section felt the need of a public school, and in the year eighteen-hundred and fifty-eight they purchased an acre of land from Mr. McDonough and built a log school-house.

This building was approximately 20 X 24 feet, built with a cottage roof. It was well lighted.

The furnishings were very plain and crude, but they answered the purpose–and I have no doubt they were proud of their achievement.

At the west end of the schoolroom there stood a large desk built by an ordinary carpenter, it was about three feet high in front and the back was about four feet.

The teacher sat on a high stool when at work on it. This may have given him some advantage over the children. rmcd.c

The pupils sat on long benches running nearly the length of the room. On the south side, the desk was against the wall, and had a shelf underneath for their books, and there was a bench the full length of the desk. The larger boys sat at this desk. Thus their backs were to the rest of the pupils. On the north side the bench was against the wall, with the desk in front of it. This also had a lower shelf, and in front of this there was a lower bench for the smaller pupils.

The room was heated by a large box stove which stood in the centre of it. The floor was of very wide boards, and the first day any little boys came to school the big boys initiated them by raising these boards and putting the frightened wee kiddies underneath. We see by this hazing is not at all modern.

For the want of more accommodation a larger school was erected in 1872. This was of frame construction, clapboard on the outside and lath and plaster on the inside. It has two cloak rooms, one on either side of a porch entrance. The seating in this school consisted of three rows of desks, each accommodating two pupils, and a long bench against the side walls.

Little remained of the equipment of the first school except the desk and the stove which served their purpose here as formerly. The stove sat at the east end of the room, while the desk occupied the space at the west end, in such position that the teacher and pupils faced each other.

The first blackboard used here was just boards painted black, but later they cut out the white plaster and put in black plaster, all across the front of the school and along the south side to the second window. For forty-two years this school furnished accommodation and met the requirements of the school system.

However, by the end of that time the demand for a more modern school became so urgent that in 1914 the present building was erected. This structure is of brick veneer, and is built side ways to the road, which runs north and south. The school room is lighted entirely from the east. The entrances are at either end, leading to the cloak-rooms. Hitherto the teacher’s comfort had not been considered. In this school a room was provided where the teacher could retire for rest or relaxation during the noon or recess intervals. This room is situated to the west of the schoolroom, occupying the space between the cloak rooms.

Along the mouth and west walls the black-boards are arranged at a convenient height. The old box stove was discarded and modern heating and ventilating equipment combined, was installed.

During the early years of school life in this part of the country there was no inspector, and Father Campbell was Superintendent until one was appointed. Mr. McBrian was the first Inspector, and as near as can be ascertained was appointed in 1870, and after about forty years of service retired. He was followed by Mr. Hutchings, and later by Mr. Ferguson, our present Inspector.

Of those who followed the noble profession of teaching in this section, note-worthy as being the first, was Mr. Hugh Bruce, who was followed by his brother, the late Mr. George F. Bruce. The latter taught alternately one day here and the next in Brechin.

Next came Miss Jane Fraser, whose record stands out as perhaps the most popular teacher of earlier times. Miss Fraser’s outstanding service was terminated by her marriage to Mr. Donald Gunn, of Thorah.

Later came Miss Jane Cameron, and Miss Jessie McKay, who both taught for several years. For outstanding ability Daniel O’Donnell must not be overlooked, as he afterwards became widely known as a wizard mathematician. Next was Mr. J. W. Hart, who later graduated in medicine and established a practice in Huntsville, where he founded the hospital, and where his memory is highly esteemed. Outstanding for length of service was Miss Martha Cameron, who taught for seven consecutive years, retiring at the end of that time to become Mrs. Ramsay, of Edmonton. Following several others in the interval, came Miss Lydia Smith, now Mrs. David Speedie, also deserving of mention.

Many others, worthy indeed, have given faithful service here, and contributed their share towards training the minds and building of character in the youth of our section. But to mention them all would be altogether too cumbersome.

It might be interesting here to pause in retrospect. Many changes have taken place in different ways in the time recorded. At one time as shown by the school register there were eighty-five pupils in attendance, while of late years this has dwindled until at present only fifteen names are registered.

New subjects have been added from time to time to the proverbial three R’s of olden time. New methods of teaching have been adopted , and a different system of examination has been introduced. No doubt these improvements facilitate the work of the pupil, although they have done away with some of the glamour of early school days. This is particularly so in the case of examinations: and lest the memory of eary times become obliterated, it might be well here, to briefly describe them.

The annual examination was the high light of school activity. To the pupils it marked the end of work and the beginning of holidays. To the parents it afforded an open opportunity to see how their children were progressing, and to judge of the teacher, so that both teacher and pupils were as we pay it today, on the spot. The whole section assembled at the school: classes were called in turn and put through by the teacher, opportunity being given to any person to question the class as well. Prizes were awarded to star pupils, and after these were distributed, the meeting was open for comment.

Here is where our present system of examination falls short of the picturesque old custom, for though public speaking is now encouraged in our schools, our pupils, when grown up, are deprived of this excellent opportunity for putting it into practice.

Imagine the young men of the section who joined in the discussion vying to see who could pay the teacher (lady of course) the most extravagant compliments, in their best oratory, and you can form some idea of the humorous side of these occasions. Parents were more sedate and matter of fact in their remarks, and when school was dismissed all lingered for a neighbourly visit. Altogether much pleasure and profit were derived from these examinations of long ago.

Such is more or less incomplete sketch of school affaire in this section up to the present year, 1936.

Some time in the future, if our civilization withstands the war clouds that are gathering in the eastern sky, perhaps some one will see fit to begin where this leaves off and add another chapter to the story.