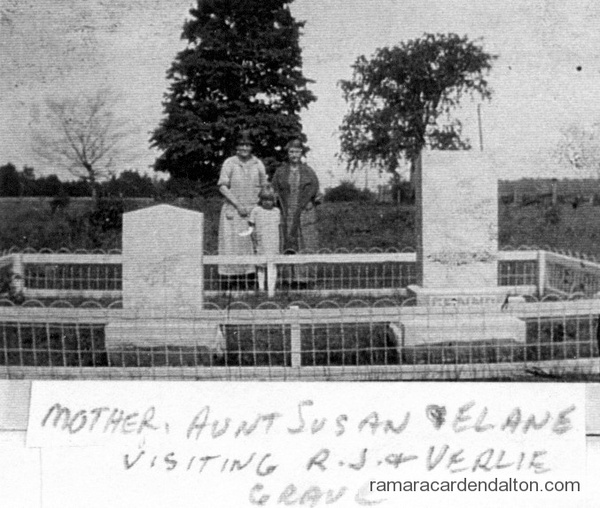 TURNER NOTES
BY GRACE DEVERELL
Duncan Turner attended School Section #5, Carden on the 8th Concession. Mr. Turner’s maternal grandmother was from Ireland (Mary Kennedy). Her home here was in Lindsay. Father came from the Lowlands of Scotland. He butchered in Thornhill for 5 years and then made bricks in Beaverton. He came to Lot 22 on the 8th Concession of Carden from Beaverton to his home. He carried flour on his back on the trail (Surveyor’s blazes) because there was no road from Beaverton to his home. His mother carried butter from the 8th Con (Carden) to Lindsay and traded it for groceries, ate dinner in Glenarm. She sold eggs at Uphill for 9 cents a dozen.
Sister Mary Ann died in January and mother died in May of the same year. In a year and a half his sister Carrie died also brother Billie with diphtheria and are buried on the farm.
In the fall of the same year they were burned out (house) and the next spring in June the same thing happened. At that time he (Dunc??)and his brother Jack (John) lived on crab apples. The first experience working out, he made 25 cents a day carrying beaver hay on poles. He next worked for Jack McFadden for $14 a month. He drew logs with his own team at Dorset for 61 days for $61. Then he went to Eldon and worked for Dougald Cameron. When he left home he had 25cents and no socks and when he got to Glenarm, Mr. Cameron met him there and they went into the hotel and he treated and Dunc returned the treat and spent his 25 cents. He worked for Mr. Cameron for three months at $20 a month. That fall he went to Sudbury and worked in a lumber camp at $1 a day. The money he made, he took home and he and Jack put in cattle at $10 a head.(*10 days work now will buy you a cow $1000* submission Committee) They kept going until they had a herd of 27 head that weighed over 1150 pounds and they sold them for $32.50 a piece. They kept going until they got more ranch land. They bought the Marren place, another 200 acres. Later Jack bought the McRae place, Lots 24 and 25 on the 8th of Carden. Bought present farm from John Stewart, Lot 8 on Ist Concession and south half of lot 7 on the 1st(Dalton?? ) The roads travelled were on the 9th to Uphill and Victoria Road and the 8th to Kirkfield. There was a shorter road to Uphill but practically impassable. He moved here(Uphill) to get near a school. Mary did not attend school until she was 8 years old. Settlers moved out and no one was left to go. There had been 10 families. The first school was a log school. (Duncan attended it) Teachers were, Dan Lucy, Bessie Thompson (Mrs. Charlie McCarthy), Miss Powers, Lindsay, Nellie McKee from Dorset, Miss Conway, Miss Stevens (Bessie Thompson’s mother, one of the first), Dr. Ross of Kirkfield boarded at Uncle Bill Turners, Miss Hacken Miss Craig– married school inspector Reason– Sadie McCaughey, Mr. Shannon– who fixed clocks. They hired him for 6 months and sacked him in a month or two. He boarded in Hector Campbell’s hotel in Kirkfield and sued the section for 6 months wages and got it.
There was no church in the settlement and the only minister walked from Uphill. (Seivright and Faulkner) The mail came first from Horncastle near Victoria Road and was carried by Bill Taylor on horseback. Then McCarthy’s had a Post Office and mail could be picked up twice a week. It had been brought from Hornecastle by Mr. McCarthy on horseback and with a mailbag strapped over horse’s neck. Next to John Martin’s, they carried from Uphill to Post Office (Last one). Earliest doctors were Dr. Ross and Dr. Woods, both from Kirkfield. Then Dr. Blanchard came to Victoria Road. Dr. Grant. Mrs. Turner made Balm of Gilead salve, wormwood stewed to drink. People helped one another in time of sickness. First reeve was Bill Taylor. Next Abe Jacob. Councillors were Jim McKee, Jim O’Neil, and James Graham.
Shoes were a problem. They wore none in the summer when young and later went with a heel out of a shoe. Used to use a boot jack to take off his boots. Used to have logging bees, threshing bees and horse power. Fine teams were used. Also flail. Pleasures were horse shoes, dancing and fishing.
The women sheared the sheep and had to remove all the burs before it was taken to Jack McKay and it had to be carded. It was brought home and spun into yarn. They made maple syrup and had wooden troughs.