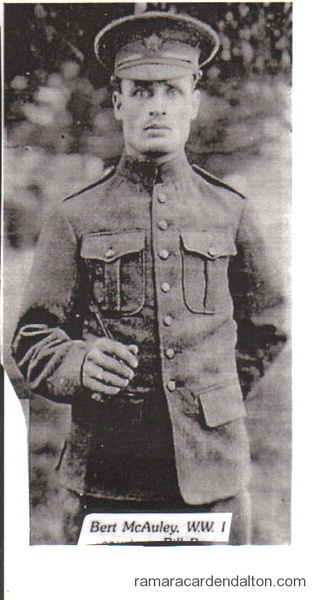 This particular copy of Carden Schools was given to us by Mr. Wayne Teel
The hand written name on the front page is William H. Teel
Mrs. Margaret(Thasher) Stewart and Miss Lillian Holder compiled the original information. That book is available at the Carden library
Mrs. Francis(Fox) Laver is now in the process of updating that book and adding some pictures.
Miss Angie Hallett converted our copy to computer format

Memories of #5 as given by Mrs. Meta Fitzsimmons (Miss Meta Power)
Miss Power had attended Modal School Course, the last held in Lindsay in the Old Central School, where part of the Lindsay Collegiate now stands. This entitled graduates to a certificate to teach for five years.
Miss Power remembers arriving at Kirkfield Station having travelled by C.N.R., with trunk and belongings, and was met there by Mr. John Martin, Secretary of school board, with horses and a large open sleigh. The nine miles from Kirkfield North to the school seemed the longest nine miles she had ever travelled. Occasionally a dim light would be seen in the distance and she would ask Mr. Martin, “Is that the house or school?” He’d reply between puffs of the old pipe – “Oh no, we’ve a long way to go yet.”
Miss Power boarded at Mr. John Martin’s – cost of boarding being $10.00 per month. Most common foods were beef, salt pork, eggs, potatoes and turnips – the latter vegetables were kept in a pit in the ground and had wonderful flavour. Mrs. Martin’s pies (pumpkin, apple, rhubarb or berry) were the best ever eaten. Home made bread and butter were beyond description. Tasty short cakes with currant were also served with preserved plums or berries. The home was a log one with three rooms downstairs – a large living room-kitchen, off which were two bedrooms. These were heated by a stove, part in each room, made possible by an opening big enough for the stove. Mr. And Mrs. Martin occupied one and the school-marm the other. Miss Power would be awakened in the cold winter mornings by Mr. Martin starting the fire in the other part. The other family members slept upstairs.
Miss Power enjoyed all the recreation and social life in the community but most of her spare time was spent reading. If neighbours called in, cards and chat were the pastimes. There were the occasional sleigh rides. On one occasion Lou Martin took Miss Power and his sister Florence to the McCarthy’s across the fields to the seventh concession over and around the snow banks. On the way back the cutter toppled over on a well rounded snow drift and all fell out.
Dances in the neighbourhood were perhaps the most memorable events of the social calendar. One party never forgotten was held at S.S. #2. During the evening (some of the men having had a bit of fire water) a fight developed and a number of the ladies had to escape by the window. Miss McMahon of this school and Miss Power of #5 were both among the ladies who got through the window in spite of their long skirts (the style in those days). Another such occasion occurred at Chirpaugh’s Hotel Victoria Road. Lou took Meta and Florence in the horse driven cutter. After dancing came the long drive home. Nearing home Lou had fallen asleep at the reins. The wise old nag stopped at the house door for the ladies to alight and then went on to the barnyard area. Taking a short turn over the manure here, the cutter upset and Lou (still asleep) went overboard. Such a cooling off! and such cool glances at breakfast next morning. How shocked her parents were when Meta later told them of her teaching experiences in Carden.
Transportation in those days was not easy and the C.N.R. left Kirkfield very early. The Duggan family had kindly offered to take Miss Power to the train any time to visit her home in Lindsay. One day she walked six miles after school Friday night to their home only to find a bee was in progress and no one could spare time or horses that day to take her to the station but she enjoyed the hospitality of the Duggan home for the week end.
Then came the end of the term and Mr. Steven’s (Inspector) letter states: “Her work there was successful. She is a young lady with winning ways with children to whom she is very kind.” This would seem the keynote which years later launched her into a long career in child welfare work with the children’s aid society and after thirty years of service therein retired as assistant superintendent in Victoria and Haliburton Counties, through the Lindsay Office.

The teacher next after Miss Power, was Miss Bess Thompson, who came in 1910. By this time only 2 families in the area had children of school age – The O’Neills and Martins. The Adams and Marren families had moved to better farming areas in 1898 and 1902 respectively.
Another teacher whose term at #5 was brought to our attention was Miss Sadie McCaughey. It is probable that this was Miss McCaughey’s first school, to which she went with a meagre education but a talent for teaching and a thirst for knowledge. The story is that she tried the Entrance Examination with her own Grade 8 Class and later proceeded to Model School, before embarking on a long and successful teaching career.
Social parties in the school were sometimes attended by sleigh loads from Kirkfield and Horncastle. All remember Charlie McCarthy as being the teacher’s suitor until the wedding bells rang in September, 1911.
From “Schools and Teachers” publication, we learn that S.S. #5 was closed June, 1911. Last teacher had been William J. Hickey with salary of $375.00. Average attendance had been 2 pupils – Julia and Charlie O’Neill and secretary John O’Neill. The little school was valued at $600.00 and equipment $70.00.
The only pupil of public school age – Charlie O’Neill continued his 3 R’s at Kirkfield Public School, boarding with the Morrison family and Julia went to Lindsay Collegiate.

SPECIAL MEETING NOVEMBER 11, 1930
Moved by Roy Fox, seconded by J. Deverell that this representative meeting of the electors of S.S. #4 Carden hereby put themselves on record as being in favour of dissolving S.S. #5 and attaching the same in such portions as they may seem expedient to adjoining sections. Carried.

Today at the site of this former country school, we gaze upon a partly grass covered stone foundation, and a heap of discarded lumber blackened by the elements. Only the cattle can be seen grazing in the surrounding pasture lands. Let us remember the struggling generation of more than half a century ago. These sturdy pioneers came full of hope to build their homes in the “New World” frontier. They also hoped for education for their children in this land of freedom. The arable land was not sufficient for successful farming, and one by one, the homes became vacant, to fall into ruins – like their little frame school. The children have grown and scattered to the larger schools of life and other battles of survival for themselves and their children.