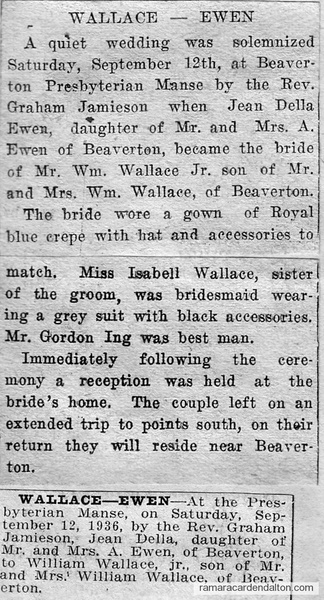 When the Rev. John C. Wilson and his young wife were on the Beaverton circuit, his first after ordination, he preached at Brechin on Sunday mornings. There was no other Methodist church in Mara. In response to an appeal from the Fair Valley settlement, Mr. Wilson visited it. Wherever he went he preached, and Mr. Wm. McNeil, a Presbyterian, offered his kitchen for the service.

The first service was held on a Saturday at 1 p.m. in 1867. The sermon was from John 3:46, “Never man spake like this man,” when the preacher held up Jesus Christ as the great teacher and only saviour of mankind. For eight months church was held on Saturday afternoon in this home when the McNeils opened their house for the services, their home for the minister, and their stable for his horse. Mrs. McNeil would often bring home from Orillia some delicacy for their guest, while Jas. Sinclair often took home the pastor’s horse to relieve the shortage in hay and oats.

The service soon changed to Sunday at 10 a.m. with Brechin in the afternoon. By this time a few settlers had reached Udney. Mr. Wilson would leave his horse at the Centre Road, and walk through the woods to hold services occasionly. So Udney was started. After two years the people began to agitate for a church. Mr. jas. Sinclair offered a free site for a church and cemetery. Mr. Jno. Fox offered to give as much as any man. Wm. McNeil declared, “Well then, he will give $100.” It was a big sum for those days, but Mr. Fox was as good as his challenge. Mr. Whitney and Mr. McPhee, of Atherley, each offered $50, and with 40’s, 30’s, and so on down, the church was assured. The contract was let to an Orillia firm for $450…..

The church was dedicated on Sunday, September 16th, 1869. The Rev. John Braden preached the sermons in the morning from the text, “How dreadful is this place, this is none other than the house of God,” and in the evening a powerful sermon from the text, He ever liveth to make intercession for us.” The Beaverton church, which was built the same year, was dedicated the following Sunday. Revival services were planned for the new church that fall, but owing to delay in the arrival of a stove, donated by the Orillia people, they could not be held. The following year, the Rev. A. C. Wilson, pastor, the revival came. The whole Protestant population was swept by a wonderful revival.

The very woods were alive with prayer and praise. Most of the adults and young people were converted, and added to the Church. Thus the foundation for the true church in the lives and homes of the people was laid. After 50 years that good work still stands, though nearly all the converts of that day are gone home. Mr. James Elder, a Presbyterian, was chosen the first class leader, and he made a splendid Methodist. No other person could so well have taken the Preacher’s part at the Jubilee services on October 5th, as the Rev. J.C. Wilson. His sermons were most inspiring. At 80 years of age, his mind and eye and voice are clear. His heart is warm and his zeal unabated. At the call of the pastor, the Rev. H. W. Foley, six people stood up to indicate that they were present at the services 50 years ago, the Rev. J. C. Wilson, D. Calderwood, R. Tiffen, D. Elder, and Mrs. Ross and Mrs. J. Wright. Mr. D. Elder, who sang with the choir at the dedication, sang again at the Jubilee. A thank offering of $93 was placed on the plates. A sum of money was presented to the beloved preacher, as a slight token of appreciation by the congregation, Fair Valley church has a good new commission to go on with its good work for another half century.