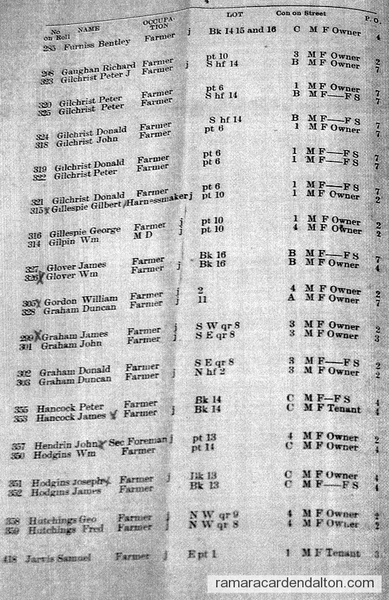 Much of what is known of the Rama Log Canal is based on a story sbmitted to the Orillia Historical Society in 1950 by Whitney Saunders. Although Saunders grew up at the Portage, his story was based on information that his father Rance had told him, about events that took place a few years before his birth.

I am not certain when Rance Saunders moved to the Portage, but it seems the story came from Whitney’s uncle John Durham, a quiet man that never confirmed or denied Rance’s claims. There seems to be a family connection between Durham and Thompson Smith, owner of the Bradford sawmills. By 1872 John Durham was a sawyer at James Durham’s mill on Bradford St. in Barrie.

Henry W. Sage was an American lumberman, with a wholsale lumber yard at Albany, N.Y. His mill at Bell Ewart was established in 1854 and arranged with some assistance of the Ontario, Simcoe & Huron Railway. He did not own timber lands, but instead purchased logs from farmers eager to clear their lands. The extensive clear cutting of forests around Lake Simcoe resulted in the decline of railway traffic and can be traced by declining revenues of the Northern Railway of Canada.

In 1866 Mr. Sage made arrangements for the purchase of standing timber in the township of Oakley, in Muskoka. Sage invited Anson Dodge to come to Ontario and following inspection of the Bell Ewart mill, they proceeded north to Muskoka, crossing Lake Couchiching on a new ferry service to Washago.

Provincial Land Surveyor Brooks W. Gossage had recently purchased a Lake Ontario steamer which had been brought to Bell Ewart by rail and placed in service on Lake Couchiching. Gossage had recently completed surveys for the Canadian Land & Emigration Co. including Longford Township. Ten years before, he had done an exploratory survey under Walter Shanly, of the Magnetawan River from Byng Inlet.

Upon taking the lumbermen across to Washago enroute to Oakley, the travellers learned of the greater lumbering prospects in Longford and Byng Inlet. Dodge purchased additional timber berths in Oakley and went on to Byng Inlet where he established Georgian Bay Lumber Co. As well as providing funding for John Thomson’s purchase of the Longford timber berths, Dodge also purchased a mill near Atherley and made additional purchases of Oakley timber under the name of Georgian Bay Lumber Co.

During the spring freshet on the Black River in 1867, Sage realized it was impacticable to get the timber to Lake Couchiching. At first he came up with the idea to relocate the Bell Ewart mill to Wasdell Falls, but then came the problem of transporting the sawn lumber to the railway at Bell Ewart or Barrie.

Henry Sage started his career not as a lumberman, but as a freight forwarder on the Erie Canal. In 1849 he had served a term in the New York State Legilature, during which time he sought improvement to the canals. With that experience in his past, Sage knew what he had to do. In June of 1867 Henry Sage wrote to Thompson Smith, to attract his interest in a canal from the Black River.

Sage also had correspondence with D’Arcy Boulton, manager of the Midland Railway, and with H. L. St. George, of Washago.

Sage’s close connection with Dodge and his association with John Thomson made the idea of establishing the mill on Lake St. John feasible, knowing that a canal would be built.

Sage’s idea to build the canal was clearly a year prior to Whitney Saunders’ claim that it was Thompson Smith’s idea. On the other hand that was even after the Ontario Legislature passed the charter of the Rama Timber Transport Co.

When the company was formed following its official charter, the directors were the three lumbermen: Henry Sage, Thompson Smith and John Thomson. The other directors were F.W. Cumberland, manager of the Northern Railway and Clarence Moberly, chief engineer of the railway.

In other versions of this story, there seems to be some confusion between Thompson Smith and John Thomson. Check your spelling please.

Henry W. Sage had relocated his wholesale lumber business from Albany to Brooklyn, N.Y. in 1860. In 1864 he established a new mill at West Bay City, Mi.
In 1869, the year the Rama Log Canal started, Sage sold the Bell Ewart mill to Silliman & Beecher. Harry Beecher of this partnership was a nephew of Harriet Beecher Stowe.

In 1872 Henry Sage contributed to Ezra Cornell’s school of business. Later Sage became chairman of Cornell University, where his correspondence is filed on micro-film in its archives at Ithaca, N.Y.

During those years Rama and Mara townships were part of the former County of Ontario and information on Sage’s land purchases can be found in the Historical Atlas of Ontario County.