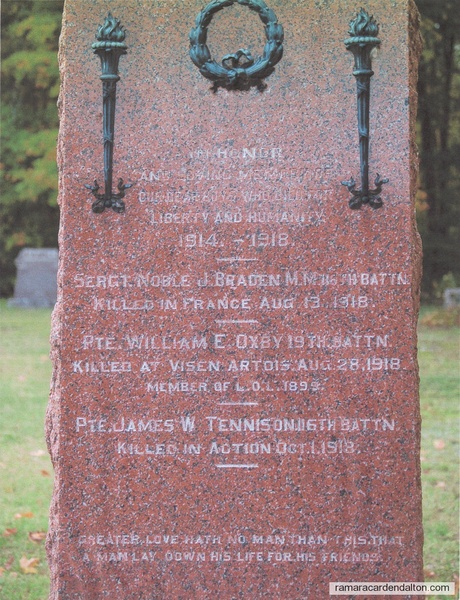 It was pioneer night at Dalrymple the other day and all the old folks had come with their fine cars instead of the horses and buggies to spend as evening full of memories of old times. Some had prepared a history of the place from as far back as they could remember.
Among the couples was one from Orillia, Mr. and Mrs. William T. Jarrett. He was born in Orillia but left to live on a farm in Dalrymple at the age of two. She came over to the village from London England when she was ten. They married 51 years ago by the late Rev. Archibald Delve uniting them.
“Life was certainly harder and simpler in those days,” says Mr. Jarrett “and healthier. Young girls didn’t run round smoking like chimneys with a lot of paint on their faces.” He told the gathering what he could remember of his old farm and what he heard his father tell him about it.
“Just to think now what they have to pay to get a bushel of wheat ground. You have to sell the wheat for what you can get and buy flour at the miller’s price. There was a grist mill in Bolsover where you got 40 pounds of flour and 15 pounds of bran and shorts out of 5 pounds of wheat to the bushel. Corduroy logs with a little dirt on them was the main road to Dalrymple then. They took the wheat out to Bolsover in a wooden sleigh drawn by oxen and they had a great time steering it around the stumps and stones.”
Mr. Jarrett has also witnessed great changes in the lumber and shingle business. “ The first timber was sawed east of John McGillivrary house with a water mill on the creek. They did that with an upright saw at the rate of one board to the hour. Mickle and Dyment then had mills on the Severn. Shingles were cut at the rate of 40,000 a day.”
“Harrowing used to be done with two pieces of wood made in a V shape with holes bored a few inches apart and iron pins driven through. You might have been able to harrow four or five acres in a day. Now I’m told by a man out west, he double discks 70 acres in one day. My grandfather used to thresh grain with a flail and some of the working men destroyed the first threshing machinery that came out around Whitby. My father cut grain with a cradle, ten acres in one and a half days when he was 21 and 100 acres in 25 days.”
“I often think when I turn on the light switch or the furnace how my father tied a rag around a copper and placed it in a small tin of wax or tallow for light. Then they had candles and the coal oil lamp and a gas lamp. I can remember my father getting up in the morning and struggling with green wood and a few dry pieces of kindling to get a fire. The corners of the old log house were snapping with the frost as if someone was chopping it down. And you could not leave any water in the pail overnight or it would burst in the morning.”
STILL GOING STRONG
There is no trace of the pioneer time in the wooden house on 20 Rose Avenue which Mr. Jarrett built for himself with the help of a few friends five years ago. He has recently finished painting it and his new project is to get the garden in shape. Since he is only 82, nobody will know what he will do next.
They came to Orillia 30 years ago and lived in the old McKerroll home on West Street for 15 years, then on St. Jean Street.. Mr. Jarrett doesn’t know when he retired since he has been doing carpentry work off and on since he left the farm.
His wife doesn’t think much of a slow down either. She still sews dresses and knits and embroiders and is busy around the house. She has done a lot of fancy work, the fanciest is a wreath made of hair. It is composed of many tiny flowers, leaves and blackberries done with all sorts of hair in different shades, twisted around fine wire.
They have such a happy marriage together that they could really celebrate their 51st wedding anniversary yesterday. Mrs. Edith Gardiner, their daughter and their son, Mr. George Jarrett with family, held a dinner at Birchmere on that occasion. Mrs. Jarrett is also foster mother to an adopted son, Ray Fox, who manages A and P Co branch in Dundas. One brother of Mr. Jarrett, Charles, lives in Regina SK.
“I once heard a man say he married the best girl around Dalrymple Lake,” said Mr. Jarrett. “ I promptly said I did not think so. He looked at me and asked why? Because I did, I said. Believe it or not, we have been 51 years married without a fight. Would it be the wonderful woman she is or would it possibly be the man she got?”