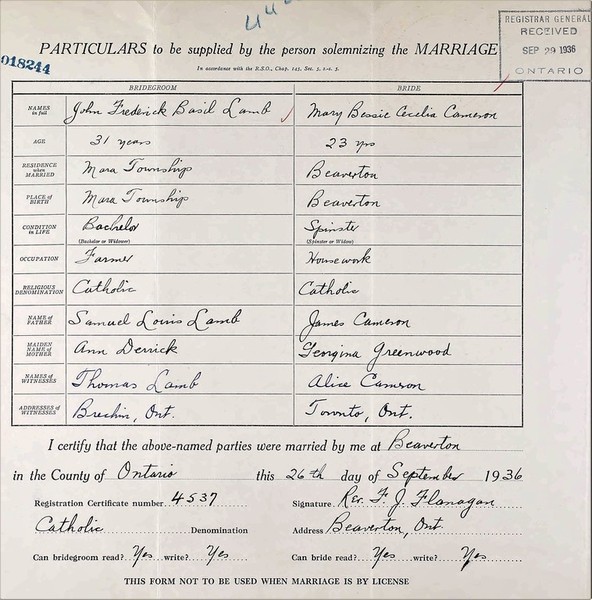 This copy property of Ramaracrdendalton history on line

John Malone began his teaching career in a log school in Brechin, then a few years later moved his students in to a new one-room brick building , built at the expense of Squire James Patrick Foley who had donated the half-acre of necessary land. Rmcd.com
John Malone taught in S.S. # 3, from 1880 to 1885, he was the son of Dennis Malone and Elizabeth McNenley, born 12 Feb. 1860, in Brock Township. In 1886 John married Catherine O’Neil of Mara Township, a daughter of Peter O’Neil and Mary O’Neill. About that time John became a grain trader, living in the village of Brechin, he had seven children, John Edmund, Mary Irene, Clara, Alphonsus, Delphina, Victor and Wilfred. In 1914, John and his entire family relocated to Chicago, the 1920 census indicates he was a bookkeeper, John Edmund a mechanical engineer, Mary Irene a teacher, Clara a stenographer, Alphonsus a shipping clerk, Delphina a stenographer, Victor a clerk, and Wilfred a medical student, who later was a general practice physician.
John Malone passed away in Chicago in the 1930’s, (exact date unknown). rmcd.c

Mary Louisa Irwin, taught at Mara S.S # 3, in 1885 to 1887. She was born near Hartley, in Carden township, on November 13, 1864, a daughter of Irish immigrants, Robert Irwin & Mary Jane Taylor. Louisa as she was known to friends and family, later taught at S.S. # 4, Carden, also known as the Dalrymple School. Her teaching career ended shortly after her 1897 marriage to John Alton of Carden, and she started a family. She had three children, Alice, Mary and John Irwin. Louisa passed away in 1933, and is buried in the Lakeview Cemetery, in Kirkfield.

Gilbert M Hutchings, was at Mara S.S. # 3, for one school year, 1890-1891, then switched jobs to become a Druggist. Gilbert was born in Oro Township, 2 July 1868, a son of George W. Hutchings & Catherine Jane Murphy, who raised their family in Mara Township. In 1891 he relocated to Coldwater, there he married Louise Maud Moffatt, of Orillia. In the late 1890’s he returned to Brechin as a Druggist and remained for some time before he, his wife and two sons, Cecil & Douglas, moved out West, settling in Portage La Prairie, Manitoba. Gilbert died in Portage La Prairie in 1955 and is buried there in the Hillside Cemetery

Jane Martha Kelly, was a teacher at S.S. # 3, from 1901 to 1905. She was a daughter of Peter Kelly a renown breeder of Clydesdale horses and his wife Catherine Fraser. Jane was born November 10, 1875 at her parents residence, lot 9, Concession 5 of Mara Township. The year after her father’s death in 1904, Jane, along with her mother, sister Agnes and brother Alfred Wesley all went West and lived in the town of High River, Alberta. There Alfred operated a Hardware Store, then a funeral home, while Jane continued teaching, at the High River school. Jane remained unmarried. She died December 9, 1953, and is buried in the Highwood Cemetery, in High River, Alberta.