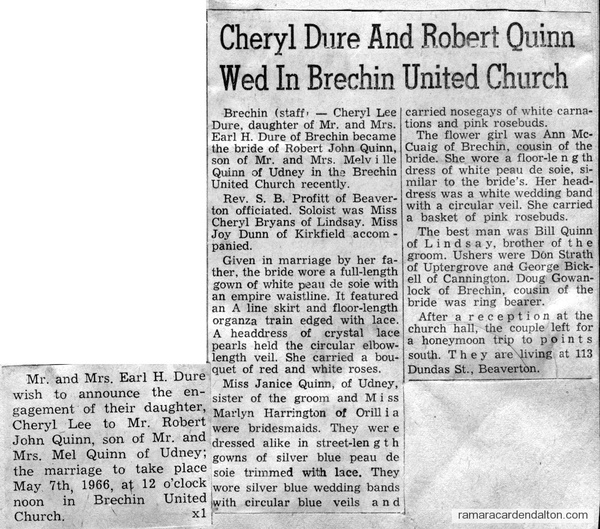 In 1863, “The Royal Oak Hotel” now the “Gamebridge Inn” was built by William Munro, who purchased the north-west corner of the original lot from Donald Cameron. Mr. Munro, father of the late Mrs. William Bourin of Beaverton had the following proprietors of the hotel: William Stone, Frank Adamson (father of Mr. Fred Adamson Barber in Beaverton), Mr. Lalone, Mrs. Meecham, Messrs. Kennedy & McDonald. Mr. Frank Markle then took it over. After Mr. Markle and family moved to New Lowell, the hotel was closed for three years.

In 1908 Lady McKenzie, who was born in Kirkfield, purchased the property and remodelled the building. It was opened as the “Gamebridge Inn” and Mr. Weese was proprietor under Lady McKenzie.

In 1910 Mrs. Wentworth came to take charge of it and she remained until Lady McKenzie’s death.

For a number of years after this, the Inn was closed and rented at intervals. Mr. Charles Merry of Kirkfield had it rented for a short time around the year 1922.

After Sir William McKenzie’s death it was decided to sell it and in 1930 Mr. Joseph Chapelle of Sutton purchased it. Mr. Chapelle built a booth and opened the Service Station and in February 1931 sold it to Mr. Norman Deverell of Dalrymple. Many improvements were made and it was an up-to-date building now, along with cabins on the flats for tourists. The open sheds were used to accommodate the horses in the good old buggy days. They later remodelled with sliding doors and used this area as a garage.

In April 1948 Mr. Norman Deverall sold the Inn to Messrs. Patrick and Alex McCarthey of Brechin. They closed in January 1951. Mr. Melville Bishop and Mr. Gordon Vyse Sr. operated the Garage and booth from March 1951 to September 1951. Mr. John Duncan bought the property in September 1951. The Duncan’s held the grand opening in December 1957. Jack Duncan operated the Inn for some fifteen years. During this time he also operated a boxing club at this site. Among some of the boxers who trained at this location were Joe Fisher, Pat MacRae, Stan McArthey and Walter Henry, a former Olympic boxer (married to Chief Sharon Stinson Henry, member of Rama Mnjikaning First Nation).

In 1987, an news article documented that owner Steve Kenyon painted and carpeted the dining room/entertaining room, he built on a front porch then installed other technological improvements to the Inn such as a satellite dish. His dream was to move from country entertainment on the weekends to the top 40 rock & roll hits. He wanted to attract a younger crowd on weekends but intended the bar to remain unchanged. He said that the Inn would continue to offer a full menu out of their kitchen and he planned on future renovations upstairs.

The Inn went through several more owners before closing for good.

The building was demolished in May 2009. The new owner, Beaverton’s own John Molloy, eligible bachelor and entrepreneur, plans on erecting a new building with five apartments upstairs and several store units on the ground level.