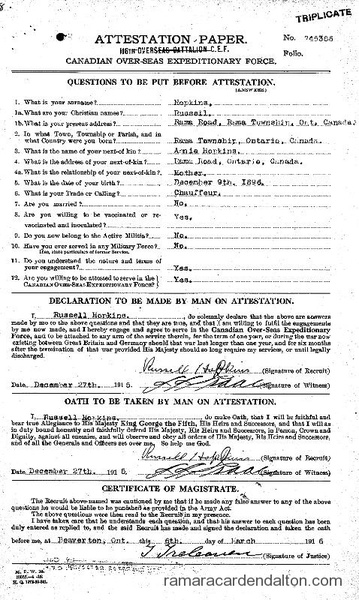 The Corrigan family history in Ramara had an auspicious beginning but is also a mystery. The first recorded settler of Mara Township was Patrick Corrigan who apparently arrived with the survey crew in 1823. The mystery is who was he and what happened to him?

The next Corrigan to arrive was Michael, who was born in County Tyrone, Ireland in 1791. Michael and his wife and young family lived in Clonavaddy Townland near Dungannon in what is today, Northern Ireland. This period of Irish history was marked by serious limitations and restrictions of the rights of the Catholics and to many Catholic tenant farmers they saw very limited prospects for the future, so Michael with wife Rose Ann Nugent, sons Patrick and Thomas, daughter Mary Ann and Michael’s sister Margaret and her husband John McIntaggart set off to make their life in North America. Another child William was born at sea in the journey. They arrived in Canada via Quebec in 1823.
.
It appears at first they went to New York State where another son Hugh was born in 1825. Conjecture is that Michael went there to find work on the Erie Canal which was being built in this time period. It is also understood that during this period Michael also undertook to file an Upper Canada Land Petition to acquire land from the Crown. It is important to point out that land was being offered to immigrants from the United Kingdom and Ireland cheap or even for free to help settle the new colony of Upper Canada. Even though his petition was for 200 acres, he was granted 100 acres and this allowed him to settle in Brock Township where his next child Mary was born in 1828.

Throughout the 1830s Michael and his family lived and farmed in Brock. In 1837, Michael was involved in a pivotal point in Ontario history when he and other farmers under the leadership of William Lyon MacKenzie joined in a rebellion (named the Upper Canada Rebellion) against the British colonial rule. The rebellion was quashed but as one of the lieutenants in the MacKenzie uprising he was arrested and jailed. He was sentenced in Jan of 1838 but subsequently pardoned in May 1838 after posting security to keep the peace for 3 years.

In an interesting twist, it is believed that Michael’s son Patrick at the age of 18 served as a volunteer in the government forces who suppressed the Upper Canada Rebellion. This would have put Michael, the father and Patrick, the son on opposite sides of the Rebellion.

It appears Michael, Rose and 9 of their children (which now include Mary, Isabella, Margaret, Michael) and the spouses of Patrick (Ellen McNenley) and Mary Ann (Patrick Duffy) arrive in Mara around 1843 and as of the census of 1851 they were shown as living at Lot 15 Concession 7.It appears only Thomas and his spouse (Margaret Miller) stayed behind in Brock. The youngest daughter Sara was born in 1843 in Mara.

Michael died in 1859 in Mara, 3 years after the passing of his wife Rose
The son Patrick continued to farm the homestead and died in 1910 at the age of 91, of his 11 children, 6 stayed in Mara and 5 dispersed to areas in the USA such as Michigan, Texas, Oregon, North Dakota and Arkansas.
Mary Ann and her husband Patrick Duffy left Mara in around 1879 and settled in Wisconsin. She died in 1894 in Eau Claire, Wisconsin. Their family of 11 for the most part stayed in Wisconsin, although some did settle in Iowa, Minnesota and California
William (Curly Bill) and spouse Mary McCann had 12 children. He died in 1876 and it looks like a number of the children left Mara to settle in Wisconsin, Washington, Michigan and as far north as Alaska
Hugh’s family (12 children) with the exception of Susan and Mary Ann stayed in the area. Susan married Michael Crosby and they ultimately settled in Windsor, Ontario. Mary Ann settled in New York State
Mary never married and died in Mara in 1857 of tuberculosis
Rose married a Thomas Aymes and we believe stayed in the area although we have no further information
Isabella married William Stokes and moved to New York State and the 1880 census shows her living in Livingston, NY
Margaret died in 1898 in Calgary, Alberta where she was the wife of Peter Prince, a well known industrialist and resident of the area. The Princes had 2 children
Sarah married Andrew Prince moved to Wisconsin sometime after 1866. They ultimately had 10 children. For the most part it looks like the family has stayed in that area
Thomas had 4 children and it is unknown when he passed away. His last 2 children were born in Georgina Township.
Michael doesn’t appear to have married and it is believed he stayed in Mara until his death

The family homestead at Lot 15 Concession 7 remained in the family until the death around 1987 of Edmund Corrigan, a grandson of Patrick.

The Corrigan family shows up in the family histories of many of the common names in Ramara to this date. Such names as Egan, Duffy, McIntaggart, Clarke, Crosby, Flannery to name a few.

Which brings us back to the beginning-Who was Patrick Corrigan?? Was he Michael’s father, an older brother perhaps?? He arrived in Mara around the same time as Michael and his family was arriving in Quebec. Coincidence or Plan???

This summary is from the collected research done by a number of us who are researching the Corrigans who came to Mara, their proud history and not only where they came from but where they went. We always welcome the input of anybody who can add to our research

Note: As noted before Patrick Corrigan was the first settler in Mara Township in 1823 and that farm remained in the family until 1987. John still farms and “works out” on lot 16 Con 10. Raymond retired to Orillia in 2009 and Harold is alive and well in Brechin