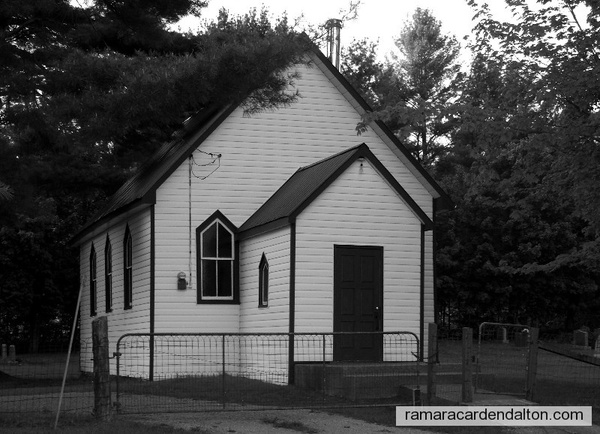 In the Spring of 1833, my father’s family lived in a part of Thorah called Egypt. It got that name because, being rich, new land, it produced forty bushels of Indian Corn to the acre. That Spring, there was a plague of Caterpillars there, which did great damage, eating up the Spring Wheat (blaird), the Hay, the Oats, and the Leaves of the Fall Wheat. As there was practically no seeding, or harvest, Donald (my brother) and I were sent to School that was being started on the Thorah side of the County line between Thorah and Eldon, called Islay Street.

Some of the Scholars and others were busy making bass-wood troughs to cover the log “shanty”–a Gaelic word, meaning “old house”, or, more properly, “ancient house.” That afternoon they put on the last of the troughs, and the walls were kinked between the logs with splits of wood and moss. The teacher’s name was Mr. Angus Ray, a man from Islay, Scotland. That was the first school in Thorah and Eldon.

In the Spring of 1834 our family moved to North Mara, in February of that year, on the ice, and drove the cattle on the ice. There was not a footpath then in North Mara, unless an Indian Path. Some time afterwards an uncle of Mr. Robson, near Fair Valley, Mara, was engaged as Teacher in a log “shanty” at the Lake Shore. After his death Mr. William McMullen was employed to teach school in a Loghouse on his farm. Afterwards the School was removed to its present site at Uptergrove, and the Settlers having become numerous, we employed regular teachers when we could get them—such as Mr. Heavener, now of Rama; Mr. Dennis O’Brien, Mr. Byrne, and Mr. O’Boyle.

I served as Trustee in these Schools for twenty-one years, and Mr. Peter Thomson took my place as Trustee, a position he still occupies. In 1833, they wanted to employ me as Teacher at Point Mara, but I refused. I forget whether they had a Teacher there before Mr. Grogan or not. Mr. Grogan afterwards went to Point Mara, and taught school there. One of our North Mara Trustees, in characterizing the Teacher’s qualifications in the School Minute Book, wrote that he was the best Teacher that could be got. One School Master they had at Atherley, a clever man, had to live on turnips for six weeks, one Spring, on account of a scarcity of food.

Such were some of the difficulties of the earliest Settlers. I have reason to believe that my School Grammar was the first Grammar that was taught in Orillia. Old Mr. Jacob Gill borrowed it for some children that were going to School in Orillia, to Miss Mainwaring’s School, (afterwards Mrs. Moffatt), who was then teaching School for the Indians.