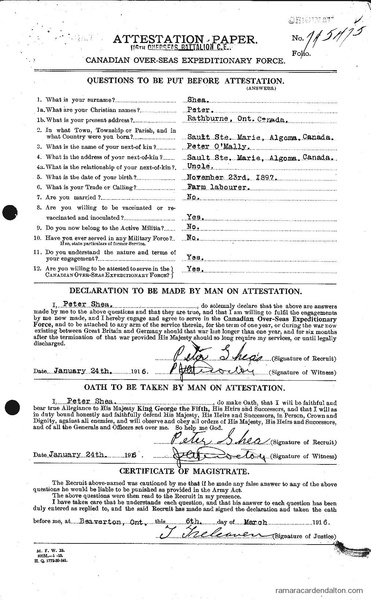 VITAL STATISTICS- who was responsible?

Following the 1867 Federal Confedaration, the newly formed Province of Ontario enacted legislation that required the recording of births, marriages and deaths. However as many of you who are interested in genealogy can attest, this law was widely ignored for some years. In 1930 an eminent demographer, Robert R. Kuczynski cited the 1865-1895 period of birth registration as a “thirty year’s war against passive indifference” and the 1896-1920 period as one of “slow progress”. He estimated that provincial birth registrations were only two-thirds complete for the 1875-1895 period and a maximum of 85 percent complete for any year in the 1896-1919 period.

The 1875 Registration Act took effect on January 1, 1876 and required households to register a death prior to interment, formally they were allowed 10 days, following the date of death. In an attempt to streamline the process, it abolished the position of County Register, there by placing Municipal Registers in direct communications with the Provincial Office. As well, the attending medical practitioner was now to submit the death certificate to the registrar of the municipality in which the death occurred, not his own municipality of residence; This removed the possibility that the householders report of death and the physician’s death certificate would go to different local officials. At this time, clerks were no longer required to keep local copies of registrations. Clerks did not always keep good records and the Inspector had difficulty checking their work. A Provincial Inspector of Vital Statistics was appointed.

The 1896 Registration Act forbade clergy, undertakers or keepers of cemeteries to bury bodies without first obtaining a certificate of death. It obligated cemetery keepers to submit semi-annual returns of burials to the registrar of the division in which the burial is situated. It required physicians to report births that they attended. Clergymen were to report marriages they had celebrated within 30 days from the date marriage, not 90 days under the 1869 & 1875 Acts. The Inspector of Vital Statistics, not the local Registrar was now responsible for initiating legal proceedings against persons “ neglecting or refusing to any non-compliance, not just wilful non-compliance” The Act once again directed the municipal Registrars to retain the original registrations and send copies to the Provincial Office. The Act legally took effect on July 1st and was implemented on August 1st of 1896.

It took some time and the heavy hand of the law to assure vital statistics were recorded properly.