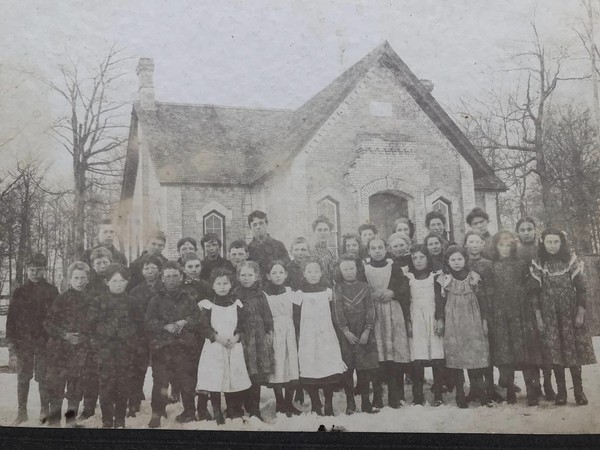 Now let us return to Brechin and the Mangans who remained in Canada. The eldest son of Granda Mangan was Peter. I remember him best when I was a boy as a topflight soccer player, who was coaxed out of retirement (as a football player) to take part in a sort of battle of the giants, a football feud between the Connaught Rangers and a Brechin team organized hastily to pep up the fall fair. Despite Pete Mangan’s outstanding performance for the Rangers, the Brechin team won and of course the referee fled into the woods. Pete Mangan was a public spirited man who served on the Township Council as deputy reeve of Mara for some years. He married Rose McElroy, and had 4 sons, Jack lives in Halifax, Maurice in Beaveron, Richard is on the Peter Mangan farm, and Hugh who died in Toronto a few years ago. There are 10 grandchildren in all. Those I know best are in the family of Maurice and his wife (Frances Kelly). They used to occupy the front seat in the Beaverton church when I said Mass there in the summer, and they came to the sacristy to greet me afterwards. The boys are powerfully built and vigorous. Why are sons so much bigger than their fathers today?

Patrick Mangan (already referred to as my godfather in baptism) was the 2nd son of Granda Mangan. He was without doubt the wittiest uncle I had and then some. Wit, is of course, most gloriously entertaining when it crops up in a solemn setting. Such a setting was an old time wake in Brechin on Xmas eve 1909, the more solemn because the deceased was Grandma Mangan. It was the practice then to have neighbours show their respect for the departed member of the family by sitting up all night. By midnight on this occasion the sitters were all talked out and sleepy. Presently the door opened slowly (no bell ringing or knocking) and slowly emerged the head, shoulders and flowing beard of Paddy Moran with snowflakes scatted all over him, (remember it is Xmas eve). Patrick Mangan broke the solemn silence “Chripes, it’s Santa Claus“, he said.

Indeed Paddy Moran looked the part. Patrick Mangan scored with wit on other occasions. Once on a visit home from Seattle my sister May O’Leary was entertained by Rosella Gettings at her Uptergrove farm, to which she invited all the relatives. So many showed up that Rosella had to resort to “standing room only”, as guests moved into the house or out upon the lawn. Patrick Mangan and I stood together in the house chatting. From time to time I caught a sight of him out of the corner of my eye, glancing around in hope of finding a chair. But none there was. Finally he said, “Well I see we have the floor”.

Patrick married Mary Gaughan. They lived on the original family home in Sandy Point and raised a family of 3 sons and 7 daughters, all of whom, with one exception, now have homes of their own within easy reach of their birthplace, or in Toronto. The exception is Eileen (Mrs. Busch) who lives in Buffalo. One of her sons is a member of the Columban Fathers, soon to be ordained to the priesthood. The Mangan homestead in Sandy Point is in the hands of the youngest son of Patrick Mangan, baptized as Edmund, but popularly called Bud.

These then are the children of Patrick Mangan. ( I realize I have not named them all). Their combined families total 46. If to these you add the combined families of all the other Mangans, the figure jumps to 76 great grandchildren of Ellen Jordan, whom I use to call Grandma Mangan. But I may as well go further and say that by actual count there are at this date in the category of great, great, grand children of Ellen Jordan 22 boys and girls.

Finally, whilst I could not name everyone in so prolific a family as that of Patrick Mangan, I must include a reference to Frances Dalton (Mrs. John J. Dalton) the third daughter of Mary and Patrick, who has been of the greatest help to me in finding my way in the tangled relationships and mystifying numbers that seem always to be changing. I should like to find some other eager beaver who will work out the descendants of Ellen Jordan in the O’Donnell (and McCorkell) line with the same precision and in a similar schematic form as Frances used in the Mangan roll call. One has to realize that the figures within the latest generation are subject to change without public notice and that a still newer generation is just around the corner. It is a demanding job to keep up to date.

I have already written about Margaret Mangan (Mrs. Crowley) including her with the Chicago Mangans. There are still two more in Canada to be included: Bridget Ellen and Sarah, and first Bridget Ellen. She married Pat Kelly, slyly called pretty Pat because he was the handsomest man in the township. This sobriquet served to distinguish him from the Pat Kelly who married Kate O’Donnell, and lived in Brechin for many years. On the contrary it was on a farm just south of the McCorkell homestead that Bridget Ellen and Pat Kelly lived. It was there at least till the children were born. When they were ready for school Pat leased the farm to Martin Brennan, and rented a house in Orillia, where he got a job. It was during one of their Orillia years, 1905-06, that I boarded at their house on Coldwater Street, whilst going to high school. Some years later the Kellys returned to their farm. The boys were able to give help to their father, Clarence especially who was the oldest, but even Leonard who was a sturdy teenager by that time. Unfortunately Clarence died at early middle age. Leonard married Dora Healy and went to live on the Jim Mugan farm, where his brother Clarence had made a beginning. The original Kelly homestead finally passed into the hands of strangers, even as the next-door McCorkell farm passed out of the family. The pattern of the Brechin parish is now wholly different.

In the meantime, Gladys Kelly married Fred McGowan, one of my old chums in the little red school house where we learned to add and to spell. One of our old-time classmates. George Mundie (now in California) sent us a photo of the old gang that Neil Rutherford kept under control by a judicious use of the strap and an appeal to our ambition. His system worked. We all escaped hanging anyhow. Much water has rolled over the dam since those far off days. Fred and Gladys have raised a family of 5 boys and 3 girls, all but one of whom are now in Toronto. Brechin is a deserted village in some sense at least. Gladys has gone to the reward which await’s a devoted wife and mother in these changing times. The McGowan boys whom I know best are Joe and Ambrose. The latter has been overseas with the Canadian army in World War II, and both have achieved considerable success, especially in a business way, in the city of Toronto.

Rosella, the younger sister of Gladys, has her place in this story too. It will be sufficient to say (and it is an eloquent tribute) that in her comparatively uneventful life “far from the maddening crowd”, she has made happy a husband, Francis Doyle, who is a farmer near Rathburn, and one daughter with which God has blessed their married life.

The youngest in Bridget Ellen’s family is Edmund Kelly, who on his fathers death took his mother to a new home in Orillia, where he had a good job with the Ontario Hospital. When she in her turn died he buried her in Brechin. I went out from Toronto to say the requiem Mass. Edmund then married Zita Brennan, and within a few years was promoted to an administrative job at a new Ontario hospital in Chatham, Ontario. His loyalty to Brechin brings him and his family yearly to the parish garden party. The McGowan boys too, Joe and Ambrose, sons of Gladys, patronize the garden party. They have summer homes on Fountain’s Bay. It used to be said; “Once a Brechinite, always a Brechinite”. There seems to be some truth in it.

Sarah Mangan, the youngest girl in the Mangan family (sister of Peter, Patrick, etc.) married William Flannery of Sandy Point. They kept a store and post office first at Hydro Glen on the Severn River and later at Torrance in the heart of Muskoka vacationland for ten or more years and raised a family of two boys, Ken and Joe, and a daughter Evelyn. Ken is now an experienced and capable teacher with a previous enviable record as bombardier with the R.C.A.F., whilst Joe is with the ambulance and health service of Toronto, and Evelyn is what few women have achieved, viz a registered nurse with 10 years experience in the Canadian Army, ending with Captaincy. Thanks be to God!

We have followed the course of two Christian families, emerging from the twilight of fable in a disturbed Ireland of the middle 19th century and after two generations linking together and picking up a third line of descent, as they jointly sweep on till the 8th generation has been reached in our day. There is a baby boy in Toronto today, Geoff Andrew Brown, whose descent can be traced back through all the eight generations to a father, Martin Jordan and a mother, Cecilia Garret, whose mortal remains lie in the Catholic cemetery at Uptergrove. Or if an alternative is preferred his descent can be traced through the same number of generations to a father, Augustine McCorkell, and a mother Mary McGill, who are buried in a cemetery in Donegal. There are of course many who can go back to the same sources through 7, 6, or 5 generations, but why bother to do so when the numbers become so large? Vital statistics are continually becoming out of date because the lines of descent are open at this end.

On the whole the history of our many-branched family has been a thrust upwards from a condition of poverty to one of relatively independent means, and even a degree of affluence. The record sparkles with names of men who have served their country on the field of battle, and have in some cases made the supreme sacrifice. The family takes pride in its continuous loyalty to the Catholic faith and of its roster of priests and nuns who are a witness to the worth of prayer in a Christian life. The saying that a family that prays together sticks together has its application here. Prayer nourishes the faith that unites us. A family that prays will never lose its identity.

Nor does the story end at the present point in time. Our very numbers and distribution is a promise for the future. New chapters in the story will be added by other writers, giving the names and plays of all the players in the great game of human life on pilgrimage to the everlasting hills at the end of time.