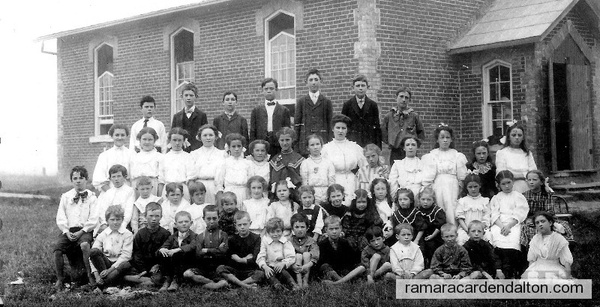 A big change in the O’Donnell -Jordan branch of the family took place in the year 1864. The head of the household, Peter O’Donnell, was fatally injured at a barn raising, and died soon after at the age of 34, leaving his wife, Ellen Jordan with 6 children, 5 girls and 1 boy. What was the widow to do? My Mother, the eldest child, had not yet reached her 11th birthday. If there was a school in the area, which I doubt, my Mother left it and got what work she could. It was probably a few years later than this date when she did domestic work for a family in Rochestor, N.Y. How she got there and how long she remained I have never been able to find out. It may well have been that she had already fixed her gaze upon Joe McCorkell of the Brechin parish, who was exactly her age. If so, one can understand why she came back after such a short time that details of her Rochestor period have been completely forgotten. What we do know is that she did return and as a result our history was substantially altered.

In the meantime Divine Providence intervened. Patrick Mangan (always referred to as Pat) married the O’Donnell widow with 6 children. It was a time of strong faith nourished by the trials of pioneer life, when men and women envisioned large families as blessings. They never completely forgot the passage in the Book of Psalms:

Truly sons are a gift of God
Indeed the sons of youth
Are like arrows in the hand of a warrior.
Oh the happiness of the man
Who has filled his quiver with them (Psalm 126)

Pat Mangan took over a family of 6 and went on to add 5 more. It was a happy as well as a fruitful marriage. I had the privilege of being at the bedside of the dying Ellen (Jordan) Mangan 40 years later. Touching indeed it was to see the sorrow of her grown up sons and daughters, and in particular to see the sorrow of her surviving husband. There was, nevertheless an undercurrent of joy too at the end. They knew that a great soul had gone to God.

This was to be the scene after another 40 years. In the meantime Pat Mangan had his work to do. If a family have been bequeathed to him, the children had to be clothed, fed and trained in Christian living, and additional children also if God sent them. Indeed God did send them in due course to the number of 5. One, of them, named Patrick after his father, is of special interest to me. He was to be my godfather at baptism. The others were Bridget Ellen, Peter, Margaret and Sarah. Now before giving notice to these Mangan children, allow me to say something about my step grandfather himself.

Let me begin by saying that when I was an altar boy in Brechin he was considered the patriarch of the parish, and I was proud to call him Granda Mangan. Twenty years later I teamed up with him, so to speak, in the blessing of the new St. Andrew’s Church, he to turn the first sod, and I to give the first sermon viz, at the laying of the corner stone. My mother, however, stole the show from me that day. It happened in this way. Though the event was in the open air, a number of chairs were brought in for the dignitaries. When the ceremony was about to start, there was but one chair left vacant and this was obviously for the Archbishop. But he didn’t get it. At the last moment my Mother who wasn’t expected, hurried in breathless and pushed up to the front. Nothing daunted she sat in the Archbishop’s chair to the amusement of all who saw it.

The memory of Granda Mangan is preserved by a memorial window overlooking the choir of the new church. The window however does not tell the whole story. It does not record that the land itself was formerly owned by the Mangan family and was donated to the parish by the father of Granda Mangan to make the church and cemetery possible. Despite this gift the cemetery at Brechin was not, it would seem, opened early enough to accommodate the donor himself or the donor’s wife who certainly died earlier than her husband. There was time enough for the bereaved husband to take another wife, and this did not please ever member of the family. The response of Richard, the brother of Pat Mangan and of his sisters Maggie and Mary Ellen was to hit the trail. They went first to the Township of Flos, near Barrie, where Richard taught school for a while, then to Cashtown where he kept the post office and country store. It was here that Mary Ellen met her future husband (O’Malley) by name and from this marriage Sisters Frances Clare and St. John, and the family of Andrew O’Malley, including its hockey superstar, Terry O’Malley ultimately came. But that is another story. The energy and bounce of Richard Mangan was still far from exhausted . The next move was to Chicago where he initiated a wholesale fruit business on Randolph Street. Maggie had accompanied him to Chicago, and as Richard remained a bachelor his devoted sister, Margaret, became his permanent housekeeper. Together they prevailed upon another Margaret Mangan, their neice and the daughter of the patriarch of Brechin, Pat Mangan, to make her home with them in the big city, then in the first flush of its enormous growth. And so it happened, Margaret Mangan II was privileged to get a good education in Chicago schools, and grew up to be a precious addition to the household of her uncle and aunt. A girl of striking appearance and charm she soon had many friends, one of whom she ultimately married, Jeremiah Crowley, Irish born and of strong Irish faith. They were blessed with two children, only one of whom, Marie, grew to maturity.

I made my first acquaintance with the Mangans and Crowleys of Chicago in the summer of 1910 when I visited the city of Mayor Daley as a college student. Fifteen years later I renewed contact with them whilst doing graduate work at the Univ. of Chicago. God gave them a son and three daughters, and they were launched upon their primary work as parents, that is to say the upbringing of their children. Having achieved some progress in this labour of love they began to give more of their time to eager and tireless travel at home and abroad, but always returning to find home more attractive than ever because of its golden jubilee in 1966, not only at the festivities in Toronto where Marie regularly visits her brilliant cousin, Sister St. John, but also at Brechin where the root of her family tree throbbed with new life at the birth and baptism of her mother many years before.