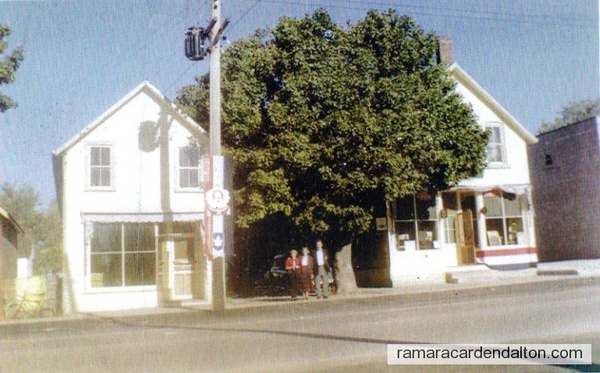 I now return to the main thread of the story where the McCorkell family as a single unit was breaking up. Sarah, as I said, married in August 1900 and May followed her example at the end of the year. In the meantime, Peter (he had a second name Leo) set out in the late autumn of 1900 to earn a few dollars felling trees and cutting logs for a lumber company in Northern Ontario. When Spring arrived he decided not to return to the family farm but to seek a new career in the United States. That was the trend to a marked degree at that time. Accordingly Pete went to Sault Ste. Marie, Mich. where May and her husband had already made their home. There Pete entered the service of the South Shore Railroad which runs from the American Soo to Superior at the other end of the lake of that name. In these two cities, one after the other he lived out his railroad career as fireman and engineer. In the Soo he met an Uptergrove girl, Tillie McNulty and married her. In due course 4 children were born to them: Leo (popularly called Corkie) Norene, Doris and Joseph. In 1916 Pete and Tillie came to my ordination bringing with them their eldest boy, Leo, who was then 10 years old. He served my first Mass.

In Superior, Wisconsin, where Pete moved his family when they were still quite young there were better opportunities for work and better schools. The children were exceptionally smart and worked together with their parents to build and pay for a fine house whilst continuing their schooling. I shall write about them one after another in turn. Leo , Pete’s eldest, made his university course at the University of Minnesota, and within a few years became a highly successful insurance executive at Superior. He married Bernice Collins , and built a home for her, but died in early middle life of high blood pressure, leaving his wife with 3 children. Fortunately Bernice was a highly qualified teacher, able to hold good positions and to earn promotions. Above all she was a good manager and the children made steady progress. Mary, the eldest, eventually married Pat Byrnes, a public relations executive and now lives in Green Bay, Wis. with her husband and two children. Patrick McCorkell, Leo’s only son, is a college graduate, a Jesuit Seminarian, and hopes to be a priest in a few years. I shall be more than happy to bequeath to him my role as chaplain of the far-flung McCorkell family for baptisms, marriages, funeral and other sacred events. Kate McCorkell, the youngest of Leo’s daughters was a mere babe when her father died. She took her college course at Purdue University where she met her husband, Lieut. Thomas Weirs. They were married at Superior last August (1970) at a large family gathering and are now with the American Army in Europe.

So much for Leo McCorkell and his family. Now for his sisters and brother in the Pete McCorkell family. Noreen , the eldest daughter, became a teacher temporarily and eventually married Frank Kabat, a highly successful business man in Ann Arbour, Michigan. He is now retired and Frank and Norene live half a year at Ann Arbour and half in Florida, depending upon the season. They have three children. The eldest Hugh, is professor of pharmaceutical studies in the University of Minnesota and lives at North Oaks farm in suburban St. Paul, with his wife Rita and three active, eager and forward looking sons. I was happy to see them at my own golden jubilee in Toronto when they were five years younger than they are now. That family believes in education by travel; the parents had taken the children to see Washington, the political heart of the nation, and were taking in the jubilee festivities at Toronto on the return. The second child of Norene and Frank Kabat is Judy. She is an honour graduate of the University of Michigan and the wife of Bud Osman in Ann Arbour. They have four children with attractive names, Cindy, Sandy, Dale, and Mark. May God bless them.
The third and youngest of the Frank Kabats is Michael, a graduate of Michigan State and now manager of a large hotel in Cleveland. He married a Toronto girl, Patricia King, whose father was a Ford Motor Company executive in Canada. They have two children, Ann and Geoff and perhaps a third. Numbers get out of date rapidly in a family history.

And now we come to the third member of the Pete McCorkell family. This is Doris , sister to Leo, Norene and Joseph, and wife of Ray Braun, a pattern designer in Elkhart, Indiana. Doris and Ray have two sons and a daughter, all born in Superior, before their parents moved to Indiana. The eldest, Douglas, interrupted his college course and married young. He has musical talent and a beautiful voice. Terrance is the second boy. In his college years he was a first class swimmer and diver, and almost made the American Olympic Team. He too is married and has a family in Elkhart. So Doris is a grandmother many times. Her youngest grandchild is Linda’s son, John Burger, a few months old at the present time (Feb. 1971) living at Milwaukee, where his father is a radio and television operator. Ray Braun did an excellent business in Elkhart for 15 years or thereabouts, but unfortunately his health began to decline at this point and he finally died in early middle age. It was a sad blow to Doris, who loved her husband very much, but she bore the loss bravely for the sake of the children at school. God will reward her for her courageous effort to carry the family burden alone.

The youngest member of the Pete McCorkell family is Joseph, a public relations director, living with his wife Effie in a beautiful suburban home in Kirkland, Washington. They have twins, Scott and Kay. The former was an exchange student for a year at a German high school. This family too believes in education by travel. Kay, the twin sister, is preparing to teach. She is a girl of character and charm and will doubtless be a popular and effective teacher. An old teacher myself, I welcome her to the noble army of the martyrs.