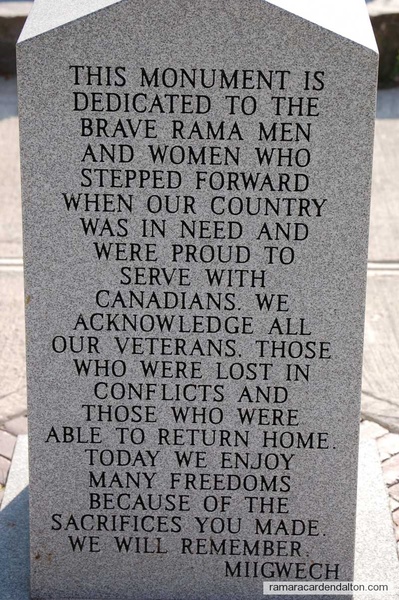 It is the experience of life that families grow up and separate, each to begin over again the human (and Divine) work of founding new families. The McCorkell exodus began early. The big year was 1900. Sarah, the eldest was married in August, May, five months later, and at some date in between when the ploughing was done, Peter went to earn some money felling trees and logging in a lumber camp in Northern Ontario. Three departures in five months!

Leaving for the present the rest of the family at the old homestead, brick house and all, on the 8th concession line, with the clock of time standing still, let us follow each of the three McCorkells who went their separate ways in 1900.

Sarah was married to Dominic O’Donnell on August 7, 1900 and went to live on the O’Donnell farm in Sandy Point. Her new home, her very own henceforth, was less than four miles away and we saw her fairly often. Nonetheless she was missed by her family. As the eldest daughter she had been mother’s right hand in all those tasks assigned to women on an Ontario farm of those days–berry picking in the woods, preserving fruit, gardening, producing eggs and poultry, milking and butter making. Such farm produce was used not only for the table, but as barter at the village store for groceries, and especially at Christmas to exchange for cloth in Orillia for the making of clothing for the children during the winter. Sarah was the seamstress of the family. I remember well her making a coat and trousers for me a month before her marriage. It was a special mark of affection to do her last sewing job for me though I understood it but vaguely at the time. She was hoping I would go to school and be something.

It was not too long before she was doing all of these things for her own growing family. Eventually there were five boys and four girls in that household. A lively and progressive group, they had the first Ford car in the parish and with it they carried their liveliness everywhere, though it was centered in Sandy Point home. To boost the family economy the girls went to work in Toronto, but often came home, doing their part to create its well deserved name as a house of hospitality. Sarah and Dominic made that spirit possible by their example and understanding. There was less of a generation gap there than any other family I have known. They had many difficulties to face but they took them in their stride.

Time, however, works great changes, removing some from the scene altogether, and displacing others. Edmond, the eldest, coming home from Toronto for Thanksgiving 1931 was killed at the Uptergrove railroad crossing (since removed). Luella worked for some years in Toronto as a supervisor with the Bell Telephone Company and then married Dollard Healy, an Atherley farmer. They have a son Edmond and twin daughters Patricia and Maureen all now married and living in the Orillia area, also two grandchildren; Ava , my godchild (she was born before my ordination) also married a farmer husband, John Shier and their picturesque farm home on the Trent Canal is within easy distance of Sandy Point. Lawrence (Larry) now a widower, lives in Toronto. His sons, Edmond and Basil and daughter Doreen are married with their own families. Larry has a unique distinction of being already a great grandfather through Edmond’s grandson recently born. Starting with the mother of Ellen Jordan, the earliest name we can identify, and who is buried in Uptergrove, the line covers 8 generations. Marguerite, now a widow, helped her husband, George Holland, in his accounting business and for a time continued to manage it following his death. Sons, Paul and Peter and three grandchildren all live in Toronto. Albert, too, hit the trail had located at Lakefield, near Peterborough. He and his wife, Mary have four daughters; Rosemary, Mary Frances and twins Margaret and Patricia. Roy has been a distinct success with the Canadian International Comstock Company. With exceptional ability he has discharged responsibilities for his company in many provinces of Canada, particularly in the West, and is continuing to do so at Toronto, the centre of their construction industry. He married Mary Boyd and has a son, Kevin. Cecilia O’Donnell became a registered nurses but has since married Jerry Finnigan, a St. Michael College graduate and at present the librarian at Campbellford High School. They have three sons and a daughter who has become a nun, Sister Mary Patricia of the Felician Sisters. This capable girl now a teacher was baptized Ave Marie . She has three brothers, as already indicated, and someone has wittily said that one should be called Pater Noster, but they are named Bill , Brian and Michael . All of these children, and indeed all of Sarah’s grandchildren, are a credit to their name.

I have left Raymond only of the Dominic O’Donnell family to write about. He is mentioned last because he is in one sense the most important. If he were to be given a title by the Queen, and could accept it, he would be called O’Donnell of Sandy Point, and his wife would be the Lady Alice. He remains at the old stand, keeping the tradition alive. Alice and Ray have three sons and one daughter. The 2nd son, John, is the right hand of his parents now standing by them to direct the affairs of the original family seat, but the others, Gerard and his wife Claudia, David and his wife Joanne, Mary Leah and her husband Raymond (all the above recently married) may be found at many weekends speeding their way from Toronto to their former hospitable home at Sandy Point.

My sister May (third in the family) was married to John O’Leary on January 1, 1901, and went to live at Sault Ste. Marie, Michigan, where her husband was foreman in a lumber yard. It was a sadder leave-taking in her case, because unlike Sarah, May was going far away. When could she come back again? It weighed heavily on her heart. Three days after her going my 10th birthday occurred. I didn’t even think of it, but she did. She sent me a birthday card. It was doubtless the first piece of mail I ever got in my own name. How thrilled I was! How important I felt! Only later did I come to realize that she was the important one, overflowing with love for the family she was leaving to create one of her own.

Several of May’s children were born at the Soo, four I think; Mary , Carmel , Gladys and Hazel. I saw them when they were small, having worked for my brother-in-law in the lumber yard at the Soo duing one summer vacation. That was in 1909. May and her husband came to my ordination in 1916, but shortly after that moved to Seattle; where three more girls, Dorothy , Madeline , Genevieve , and one boy, Edward, the youngest, were born.

In due time all these O’Learys chose life partners and made their homes in various places, with the exception of Gladys who died quite young. Mary and Carmel are now living in California with their husbands in retirement. Mary and her husband Paul Mieseke, have one son, Richard married and living in California. Carmel is married to Les Holmes. Hazel Bodie, May’s widowed daughter, lives with her mother in Seattle. Another daughter, Dorothy Carroll died about 5 years ago not too long after her remarriage. She had been widowed and had a daughter Barbara Miller and two sons Philip and Lawrence Conklin, all living in the Seattle area. Madeline and her husband, Tom O’Connell live in Seattle area also but they are tireless travellers (Tom was a railroader) and they may be seen almost any place in America or abroad. Their son and daughter Tom and Patricia are each happily married in the area and have interesting and smart families. There is in fact a Tom O’Connell III, doubtless a chip of the old block. Pat and her husband, Jim Johnston, have four daughters. Edward O’Leary the youngest and only son, is an Inland Revenue Official. He too lives in Seattle with his wife, Jessie , and their three lively and inventive boys, Mike, Tim and Neil, each on the verge of college or within it already. The only O’Leary remote from her childhood haunts is Genevieve. She lives in a beautiful town house in Washington, D.C. with her husband, Michael Dane, and their daughter, Michelle. Both parents are employees of the federal government. Convinced that travel has high educational value the Danes get on wheels or take to the air on regular long holidays. I have met them at least once at the West coast.

My sister May came home from Seattle to Brechin once before her father died. That was in 1933. At that time she went to see Gertie Evans, and other school friends still living at Udney. It was a joy for her to see them. It was too long a journey to make more than once. Circumstances changed later, however, when air travel became more common, safe and relatively cheap. Accordingly when Genevieve began to live in the national capital, May had an additional and compelling reason for going East. She made a number of flights, and usually managed a side trip to Toronto and Brechin. When Rosella died in 1965, however, May was loath to face the ordeal again. The old home without Rosella would not be the same. When the year of my golden jubilee as a priest (1966) came around, the Danes at Washington knew what to do. They pressed May to visit them and they themselves took her to Toronto with their young daughter Michelle, along with Hazel who had accompanied May from Seattle. One has only to glance over the series of snapshots taken by Mike Dane and handsomely mounted in an album to live the jubilee over again. It is an artist’s story of that sacred event. It is a joy to me because it is a record of a remnant of my family, of whom May and I are the sole survivors, coming together to thank God for the divine gift of a vocation to the priesthood fifty years before.

Here ends the O’Leary section of the McCorkell saga. I may finally say, however, that after the Basilian Fathers founded St. Mark’s College at the University of British Columbia, I had the opportunity, or at least an excuse, to visit at intervals Vancouver, B.C. and I never did so without going to see the O’Learys of Seattle, the McCorkells of Kirkland, Washington, and hopefully the glory of Mount Rainier.