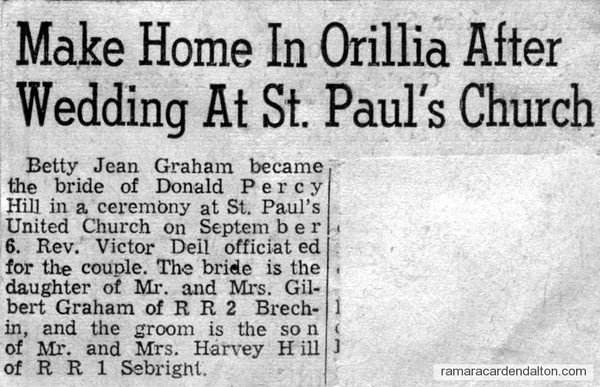 The story of the congregation is a story of cooperation and good will, as financial struggle and a small population bound people together in a common will to overcome. It seems there was always a sense of sharing a common goal which was more important than personal or denominational differences. This goes back to when Mud Lake and Dartmoor congregations closed and went to Sebright and many of the same people attended both Presbyterian and Methodist services.

The earliest records of the building was the Zion Presbyterian Church and is now known as the Sebright United Church. As is indicated in the foregoing there was a congregation at Sebright some years before 1886. Registry office records show that on December 21, 1872, Robert Renwick Young purchased Lot 21, Con. B. Township of Rama from George Campbell who had received it from the Crown a month earlier. By January 1873, Edward Herring purchased a lot on the corner at the east edge of the lot “North of Monck Road” where he started a store.

Shortly after Andrew McNabb bought a lot immediately west of Mr. Herring, where he built a blacksmith shop. Registry office records show that on May 27, 1878, Mr. Young gave the trustees of the Methodist Church ¼ acre as a site for a church. In January 1897, this was enlarged by the addition of 1/8 of an acre. It would appear from the newspaper story that Mr. Young gave the Methodists and the Presbyterians each a lot at the same time, but the Presbyterians did not register their deed, as the first record in the registry office is on June 15, 1886 for the larger area, “three chains and eighty eight links by two chains and twenty three links.”

On July 16, 1907, for the sum of $20.00 Mr. Young sold a lot, “three chains nine and one half links by two chains and twenty-five links” lying north of the first lot. This deed was to “David Nicholson of the Township of Dalton in the County of Victoria, Yeoman and Alexander McMillan of the Township of Rama in the County of Ontario, Yeoman–In Trust–for the site of a Burying Ground for the Community around the Village of Sebright in the Townships of Rama, Dalton and Carden and for any others to whom the said Trustees may grant the right of being buried in the said burying ground.” The minister, John Davidson, was witness. This deed includes all of the earliest used part of the cemetery with burials dating back to at least 1885.

As can be seen by the dates, the burials until this time were not on Church and burying ground property, but on Mr. Young’s land. There may be a story behind the delay in getting a deed, however, at his time we can only speculate.

On the 31st of March 1908, Mr. Young conveyed to “William John Hill of the Township of Dalton in the County of Victoria, Farmer, and Dugald McNab of the Township of Carden, in the County of Victoria, Farmer, Trustees of the Presbyterian Church for the consideration of $30.00 a parcel of land, “two chains and seven links by two chains and twenty three links” situated directly south of the original lot. “To hold in trust for the site of a church and a manse and for a burying ground or for any one or more of the said purposes.” This is the lot where the manse is built.

There is no record of when the shed to accommodate the horses of the worshippers was built, but no doubt it would be soon after the church was finished. This building measuring approximately 24’ by 80’ remained until it was sold in 1961. It was on the west side of the lot behind the church. Shortly after the Methodist Church closed, the shed there was torn down and rebuilt at the north end of the original shed, which had become too small, making a building of approximately 24’ by 160’.

With the advent of the automobiles, the shed was of little use. In 1939 the shed that had been moved from the Methodist Church was sold to Wilbert Dewell for a machinery shed. It is still used for that purpose on the Dewell farm where Joe and Bonnie Long live.

The church was heated by two wood stoves at the back of the church with long runs of smoke pipes to chimneys at the front. The chimneys remained up the inside of the front wall until the church was redecorated in 1980. Mrs. Delta Canning recalls that there was a thick red cushion on the front pew where the senior elders sat on Sundays.

Lighting was by coal oil lamps on brackets on the walls and hanging from the ceiling. There is no record of the first organ. It is not known if the organ mentioned at the picnic in 1886 was the church organ or borrowed from someone’s home. The only other clue available is a picture of the Presbyterian choir with an organ. Included in the picture is the minister, J. D. Smith, who served here sometime between 1894 and 1896. The electric organ now in use was purchased as a memorial project in 1979 at the instigation of Rev. Lentz.

By 1932 the congregation decided that a basement was needed. Mr. Wilfred Avison of Toronto, an architect, who had a cottage on Avery’s Point designed the entrance and gave advice on putting in the basement. That summer, shortly after Rev. C. E. Cragg arrived from Oshawa, work commenced. Mr. Cragg was the ideal man to head up the construction as he was a great organizer and could get everyone in the community involved. This was in the depths of the depression with lots of manpower available but little money. An opening was made at the front where the doorway is now and the earth under the church was hauled out be horses drawing a scraper, which is like a big scoop with handles for a man to hang on to. The stone for the entrance and front steps was quarried at Charles Freelan’s property. Robert Lelliot was the mason with Mr. Freelan helping. Most of the men in the community worked at the job whether they attended church services or not; a real community effort.

Donald McNabb recalls that the fall of 1932 was very wet. If only a few men came to work in the morning, Mr. Cragg would start out around the community to recruit more help. He would tell the men, “Since it is too wet to work at home, surely you can come and work at the basement today.” On a fine day he would say, “So and so cannot come today, you should come to keep the work going.” Before long he would have enough help for the day, and in that way he kept workers on the job. Mr. Cragg must have been a persuasive speaker, both in and out of the pulpit.

After the basement was finished, they made long tables and benches and some of these are now used at the Dalton Community Centre. The box stoves were replaced by a wood furnace, installed in the southeast corner of the basement and again a long run of pipes to a new chimney built outside the wall at the west end. This furnace was replaced by another about 1950. It was put in the middle of the basement, much to the dismay of the ladies, as it left no room to set up a quilt for quiltings and cut down space to set up tables for church suppers. Before long it was banished to the corner where the original had stood. It was later converted to burn oil. In 1980 the present furnace was installed near the chimney as fire regulations would not allow such a length of smoke pipes. This too was much to the annoyance of the ladies as they now lost a large part of their kitchen. Over the years the kitchen has been remodelled with water brought over from the manse, a hot water heater added and more modern stoves and a refrigerator. The basement walls have been panelled to stop the mortar flaking off on everyone’s clothes when they brushed against the stone wall. Recently the furnace has been enclosed, a fire-resistant ceiling put up, and other changes to meet the provisions of the fire code. Most of the money for these improvements was raised by the women of the congregation through the W. A. and later the U.C.W.

1939 saw electric power lines reach Sebright. The church and manse were beneficiaries of this miracle of light and energy. No more finding yourself in the shadow under the base of an oil lamp hanging over your head. The original electric lights are still in use today.
Through time there have been various other improvements such as storm windows, insulation and aluminum soffit and facia.

The interior of the church has remained largely unchanged over a century of use. The platform has been widened with the front pews moved back to the space where box stoves had sat. The oak screen in front of the pulpit, which by the way was originally part of St. Paul’s United Church in Orillia, was installed at the time when most of the choir was made up of members of the young people’s group and the mini-skirt was coming into fashion. The front of the church was panelled, the ceiling tiled and the walls redone over a period from 1980 to 1983.

A small barn was built behind the manse for the minister’s horse and chickens. It was torn down in 1948 and the material was used to build the garage by the road.
The manse remained almost unchanged until the fifties when a bathroom was installed, a well was drilled and the furnace was converted to oil. Since 1971 it has been occupied by various renters.