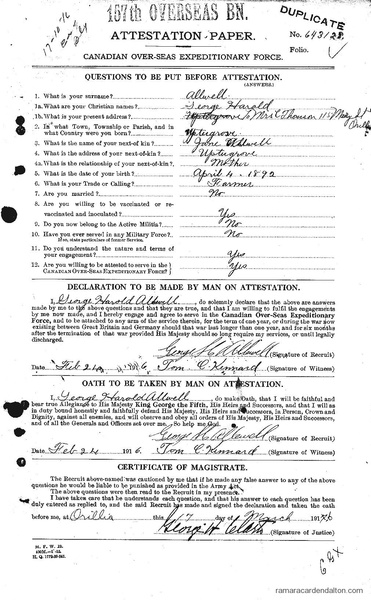 It is not known who was the first to be buried in the cemetery or when the burial occurred. There was no mapping of the cemetery or records until recent times. As related earlier when dealing with the property, dates on tombstones go back to 1885 even though the actual site was not deeded to the cemetery until 1907. These stones bear mute testimony to the heartache and sorrow of the early residents. For example, several children of Mr. and Mrs. John Carley died with a few days of each other in 1885, probably of diptheria, and children of Mr. and Mrs. Philip Taylor passed away in 1895. And there are memorials of young mothers who died along with their newborn babies.

Shortly after the end of the first World War, in a burst of patriotism and gratitude a subscription was taken up and with the money raised a cenotaph was erected. This imposing memorial of red granite is just inside the fence about the middle of the cemetery. It bears this inscription:

At the same time this part was laid out for burial sites. The practice of holding a decoration service was instituted with the offering going toward the care of the cemetery. For many years the service was held outside where the rink had been, until there were too many graves in that part to set up benches for the congregation. By 1979 an area closer to the church was cleared of brush and trees and levelled to provide additional space.

Paying someone to dig a grave is a recent phenomenon. It used to be, that in the event of a death in the community the men gathered and worked together to dig the grave. This has now almost completely changed as have many other old customs.
In the days before riding lawn mowers, Robert McKenzie and Rand Watt lavished hours of care on the grounds with very little remuneration. Since then various people have cut the grass for a short period. The last few years Donald Childs has done this, keeping it one of the most beautiful and picturesque cemeteries in the country.