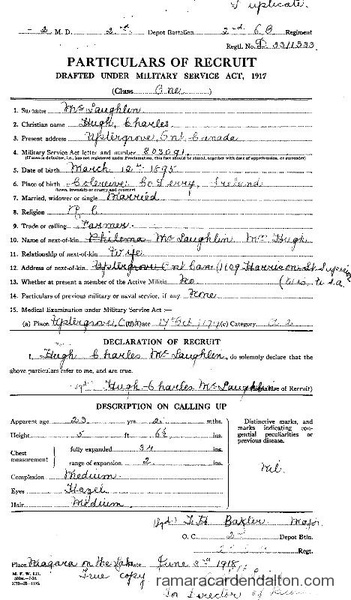 HISTORY OF THE UDNEY UNITED CHURCH

This historical record could not have been compiled without considerable research on the part of the author, Mrs. Marjorie Martin. We commend her highly for the contribution to the Church and the Udney Congregation thanks her most sincerely.

This history was prepared in 1965 in answer to a questionnaire sent out by the Bay of Quinte Conference. On completion it was to be returned to the Historical Convenor of the Presbytery, Reverend S. Profitt, who is in turn responsible for sending it to the Conference Archives Historian for safe custody. I wish to acknowledge the patient com-operation of Mrs. Jennie Newman, Mrs. Maud Wright and Mrs. Gert Givens. There are many blanks in the history: it is hoped they may still be filled in. Any information of any kind would be sincerely appreciated. It is possible that family records such as old marriage records could supply information as to early ministers and when they served. Please contact Marjorie Martin with any such information.

The date the original congregation was formed is not known. Before there was a church, services were held in the homes of David Evans, J. Martin and J. Hargrave. The actual date of the purchase of the site for the original church from Thos. Moore is not known, nor is that of the erection of the church. However, the Whitby Registration Office shows that the deed for the sale of “The Easterly Four rods of the Westerly fourteen rods and the Southerly ten rods of Lot 10, Concession 10, Mara Township” was registered on February 2, 1881.The original church was a white clapboard building on posts located about where Elmer Robertson’s kitchen now stands. I am told the pigs liked to get under the church and give the minister competition. The present church site was purchased in 1900; the deed being registered on August 16th. In 1908 additional property was bought. The kitchen-shed was erected on the North end of the church in 1949.

The original church was torn down and sold to John Gray for $50. It was used in building the home now occupied by John and Stella Grey.

The original denominational affiliation was, of course, Methodist. The “business” methods of the church were quite different than at present. Much of the information for this history is taken from the minute books of the “Atherly Circuit” minute book, commencing on august 6th, 1889, although Udney was not part of that circuit until 1895. The Circuit registers, starting from 1888, are also quite informative. One finds that church discipline certainly played a part in the 1890’s. There are records of certificates being sent to “class leader” where a member was not proving satisfactory and many were “removed” from the early church role.

The governing body of the circuit was the “Quarterly Board” which met four times a year. That the members were faithful is shown from the records. This is the body that dealt with such matters as setting up a “Sunday School Committee”, etc., including the class leaders for the various churches. The number of stewards from each church was set by the board according to membership and the stewards voted on by the Quarterly Board. In the local Church, the business was conducted by the Trustees. The oldest records available are from March 12, 1913, at which time J.M. Robertson was the Secretary.

The Circuit Register of the Atherley Circuit would seem to indicated that originally there had been a six-point circuit consisting of Longford, Atherley, Fairvalley, Providence (Udney), Brechin and Bolsover. The membership of all six churches as of 1888 was included in the register by the first minister of the Atherley Circuit, Rev. W.J. Sanders. That Rev. Sanders had been minister of Udney is confirmed by Mrs. Maud Edwards, who consulted with Oliver and George Hargrave. We are indebted to them for the list of the early minister at Udney. Apparently Bolsover, Udney and Brechin formed the “Bolsover Circuit” in 1889, at the same time as Atherley, Fairvalley and Longford formed the “Atherley Circuit”. How long the Bolsover Circuit lasted is not known. Mrs. Edwards mentions ministers living at Bolsover by says Rev. J.S.I. Wilson, who appears to have been preaching at Udney in 1893, boarded with Mrs. John Cook in Brechin. When Udney joined the Atherley Circuit in 1895 the membership register was supplied by Rev. W.P. Rodgers of the Brechin Circuit. Longford dropped out of the Atherley Circuit in 1896. In 1918, Atherley Church having run into difficulties, services were suspended there and the Atherley Congregation combined with Uptergrove Presbyterian Church. The new Circuit was known as the “Uptergrove Circuit”. In 1925, as Uptergrove had voted anti-union, services were reopened at Atherley. The re-formed circuit became known as the “Udney Circuit” of the United Church of Canada. In 1933 Fairvalley Church burnt down in August. As their services had gradually became fewer and farther apart, it was not replaced. Again in 1935 the circuit was re-organized, with Brechin joining Udney and Atherley. The name of the circuit register lists the circuit in this way until 1950, the circuit gradually became known as the Brechin Circuit.

The list of early ministers supplied by Mrs. Edwards includes Mr. Mallett (1885), Sanders, Lewis, McGauhy, J.S.I. Wilson and Rodgers. Mrs. Newman can remember Mr. Lewis marrying an Atherley Circuit girl. Mr. Lewis was not a minister at the Fairvalley Church which Mrs. Newman attended, so it would seem that he must have been on the Bolsover or Brechin Circuit between 1889 and 1895. Mrs. Wright cannot remember Mr. Sanders, being too young, but can remember a Mr. Thomas and Mr. McGauhy and Mrs. Givens is sure Mr. Lewis served later than they did. That Mr. Wilson was here in 1893, or came that year, is ascertained by the fact that he was minister here when Mrs. Edwards, then Maud St. John became the first church pianist at the age of eleven. Mrs. Wilson’s father also served the Udney Congregation at an earlier date.

The following ministers have served the Udney Church since joining the Atherley Circuit in 1895.

The first Secretary to Committee of Stewards was Douglas Robertson who served from 1960 to 1963. Leslie Snoddon has served since 1964.

A Charles Annand was show in the register as Sunday School Superintendent in 1889. The register also shows Thos. Martin as serving in 1897 and 1906 and Robt. Doble in 1911. The periods of their service are unknown. Walter St. John served many years, until 1948. There is no record of the start of his service. In 1948 Elmer Robertson served, and again in 1949. In 1950 Milton Page became Superintendent and is still serving in that capacity. In 1964 W. Carter was name Assistant and still serves.

Caretaking This was usually divided, with on person putting on fires, cleaning snow, etc., and either a second person hired to clean or the cleaning done on a volunteer basis. No dates are available, nor are the names necessarily in the right order.
Mrs. McQueen Mr. & Mrs. John Mundie
J.M. Robertson & Sons – served for approximately 30 years
Mrs. Clare (Annie) St. John – both cleaning and fires
Herbert HIckson Mrs. T. (Hazel) Carr
William Wright Mrs. A. (May) Lamb
Rachel Tiffin Marguerite MacDonald
Kay Have and family

No dates are available for many of the Important Organizations.
The first Women’s Missionary Society from approx. 1906-1910 to aprox. 1927. The Second W.M.S. from May 1955 until Dec. 1962. Women’s Association from May 1930 until December 1962 when the Women’s Missionary Society and the Women’s Association became the United Church Women in January 1963.

Around the turn of the century there was an Epworth League. There have been several Young People’s groups, which unfortunately do not last very long.

On June 4th , 1965 many members of this church were proud to go to Toronto to attend the Ordination Service for Thomas Milton Page, son of Mr. & Mrs. Milton Page of Udney. He had graduated from Emmanuel College in Toronto. He had been serving as student pastor at Churchill, Ontario, having previously served at Regent Park Church, Orillia. His licensing service was held at Udney. Tom is now serving at Stanley, N.B.