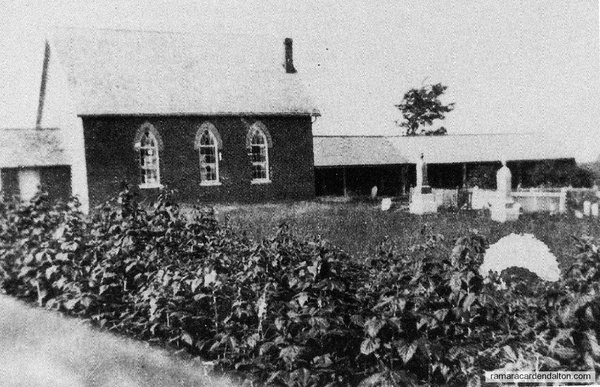 Andrew Graham arrived in Canada at the age of four.  His branch of the clan had come from Scotland to Ireland and to Upper Canada, the Grahams settled in Reach in 1825 where three of five sons became landowners.

Fifty years pass to find Andrew and his wife Ann (Buchanan), staunch Presbyterians, established in a comfortable home on a good farm near Port Perry.  Occasional visits, with relatives in Dalrymple, influenced their moving to Carden in hopes of greater opportunities for five sons and their only daughter, Alice who was eight.

Forested lands with only twenty-six acres of clearing was purchased from the Hicks, Palmers and Bucks at considerable cost.  Log buildings seemed primitive but that trail from the Narrows, winding crazily to avoid stumps!  Ann Graham wanted something better, further from the shore.  Her sons spent weeks clearing and stupping a gift road to A. Thompson’s gate.  No cash but pioneers’ gratitude was the road builders’ reward.  The swamp road, leading to the eleventh concession (Ramara #46) was constructed soon after by John Chrysler.

Clearing progressed with felling and teaming oak logs to Lorneville and oak lumber to Brechin at twelve dollars per thousand.  Frame buildings were welcomed as fields were slowly carved out.  The three older sons chopped sixty acres one winter – a record indeed.

Meanwhile Ann Graham spun and wove steadily, with help for the family sewing and the piecing of log cabin quilts. Parties for son, Sam, from Whitby, were his mother’s joy.  But three years of pioneering proved too arduous and this whole- hearted woman died when only fifty-four. In 1894, Andrew Graham was given a license for local preaching, serving many churches the area when ministers were absent.  The necessary study was a strain but listeners’ appreciation was encouraging.  On reaching Bexley, one cold Sunday, he stood too near the hot box-stove.  In a flash, the whole front of his new raccoon coat was singed. Andrew reached the age of sixty-seven, always interested in his sons’ efforts.

We have already recorded the death at the family residence, Township of Carden, on Tuesday February 2, 1886 of Andrew Graham, aged 68 years.  Deceased was for many years and esteemed inhabitant of the Township of Reach, where his influence and example contributed much toward forwarding the best interests of the community.  Sober, industrious and persevering, he made himself a comfortable home house there.  But influenced by a spirit of push and enterprise, he sought his way to the uncultivated and only sparsely inhabited Township of Carden, whereby his perseverance and the energy of a faithful wife, an intelligent and active family, he soon received and a happy and prosperous house surrounded by all that is necessary to make his life enjoyable.  He died respected by the entire community.

( The Grahams left of very prosperous farm in Reach. One of the factors in them making the move was Anne’s desire to be near her sisters who were already in the community.  He probably also wanted to move to a place for his sons could find land if they wanted to farm.F.L.)

In time, Edward, Wellington , Samuel and Albert moved away leaving only James on the farm.   Edward married  Ellen Day and lived at  Lake Dalrymple.  In 1901, they moved with their three children to become part of Christian community called Zion City.  Wellington married Lucretia Thompson . Samuel married Maude Wakley. He had learned printing from his Uncle James Baird in Prince Albert and later became owner and editor of the Hailton Sentinel and Oshawa Vindicator. Albert married Elizabeth Fox . Alice, the youngest stayed at the homestead until she married, Elizabeth’s brother, George Fox. (See Fox Family History)

James married Sarah Day and they went on to farm and raise their family in the family home.  There were five sons and two daughters.  Frank died very young.

Butter-making became a major industry.  Square tubs of it shipped to Napanee or traded for supplies, even hats in Orillia.  A cheese factory operated in Sebright for a year, then butter in pound prints, became popular.  About 1912, the Newman Creamery opened.  It was a red-letter day for Dalrymple’s housewives as they usually received the “cream” money.

After enlarging the home barns, a new house was built in 1899(?).  The north barn was just completed in 1925 when fire destroyed it, so another one followed in 1926.

James was always interested in politics and served as Carden Township’s auditor and later on as Reeve.  He was very active in the Dalrymple Church and also served as a lay minister.

Wilmot, Chester, Howard and Louis carried on after their father’s passing at the age of seventy-five.  Sarah Graham reached her eighty- fourth year, having enjoyed duty, culture of books and serving others.

Fire of unknown origin about midnight on Saturday, destroyed a barn owned by the Graham Brothers on a farm formerly known as Tom Black’s. (Corner of CKL #6)  This makes the third barn burned off  one foundation, as Tom Black had two barns burned while he was living on the farm.

After years as chorister, organist, Sunday School teacher, Estella married Rev. David Morris in 1922.  David came to Canada from Wales in 1910 and became a Methodist Minister.  He served in the armed forces in World War 1.  David and Estelle were in churches in Tisdale, Vicount and Imperial.  They then moved back to Ontario to Seagrave and then Bridgenorth. In 1953 they retired to Orillia.  Estelle died in 1961 and David returned to England to live out his life. David died in1983.

Myrtle taught many years in Toronto Schools and became a vice-principal.  When her mother became ill and needed care, she came home to look after her. After the death of her mother, Myrtle became the family matriarch.  Many relatives from near and far came to visit.  She kept in touch with many of them. She loved to write and was especially interested in family and local history. The books Dalrymple On The Lake, In Days of Yore (The Day Family History) and The Parsonage were 3 that were printed. Her later years were also spent looking after the household for her brothers.

Chester farmed and raised cattle on the home farm.  He served in the armed forces in W.W.1  In 1935 he purchase land from H.H. Chrysler. Chester married Elva Chrysler and he built a home and cottages on the former Richie acres. He was active in the church and a member of the Kirkfield Masonic Lodge. Elva and Chester raised three children, Jim, Lois and Jean.

Wilmot and cousin Roy Fox went west to farm a 1¾ section. They stayed for 6 years but experienced rust and frost problems. They eventually sold out and returned home.

In the 1930’s, Wilmot started to develop a ranch business of his own and therefore spent less time on the home farm.  He was a church member and served 2 years on the Carden Council. He died in January of 1957.

The last two brothers, Howard and Louis continued to farm along with Chester.  The farm was sold in 1971 to Ross Radway but the Graham brothers continued to farm and run many cattle on their ranches.  Howard retired in 1977 to the Al Mar Nursing Home and then later to Hillcrest Lodge. He often came home on weekends.

Myrtle died in January 1983 just before her 91st birthday.  She didn’t want to turn 91 because that would make her an old woman. Howard died in 1984. Louis kept on alone with a few cattle to keep him busy and died in 1997.

Meanwhile  across the lake Chester and Elva watched as their children grew and married.  Jim became a teacher in Port Perry and married Ellen Black who was also a teacher.  They built a house and opened up a store in Orillia called Pioneer Homestead.  They raised three children, Heather, Rob and Sara.

Lois became a teacher and worked in Port Credit for 2 years.  She married Tom Feltis in 1965 and moved to Guelph. Tom was in a building business with his brother and Lois continued to teach until Chyrl was born.  They had bought a piece of Graham property and built a cottage on the lake. . They enlarged the cottage and Tom started a building business with Ross Radway called Lake Dalrymple Contractors which operated from this site.  In this home they raised Chryl, Peter and Randy. Besides helping with the business, Lois was very active in community and church activities.  The community, friends and family were saddened by Lois’ early death in 1999.  The business now operates out of Orillia.

Jean married Barry Jones in 1966.  They both worked in Toronto for some time.  They also bought Graham property adjoining the Feltis lot and built a house there.  There they raised two sons, Patrick and Justin.  Jean and the boys moved to Lindsay.  This home is now occupied by Carol and Barry Jones.

The property has been sold a few times since.

Look for the bookon   Lake Dalrymple book with added information