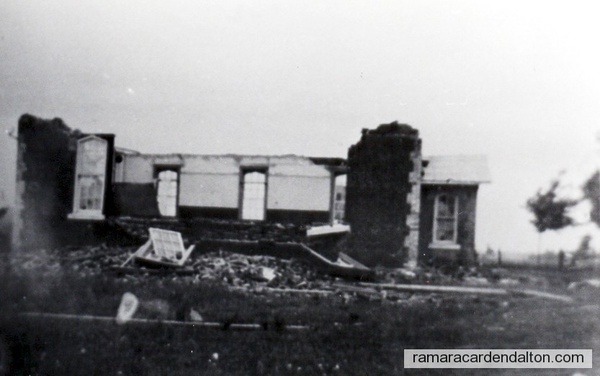 The hotelkeeper in Brechin, a village located about 60 miles north of Toronto , is wise in his day and generation.  This bonifate (?),  who began his hotel career as a bellboy in Orillia, is named Fred Maundrell.  He has kept hotel in Brechin for 10 years and had a business rival until a year ago, when the opposition hotel burned out and business did not warrant its reconstruction.  Now whether from altruistic motives or not, Mr. Maundrell decided about 5 months ago to cut out the sale of whiskey and other concentrated alcoholic drinks from the bar. In fairness to Mr. Maundrell, it might be stated that local option has been tried 3 times in the village and each time defeated by a straight majority and the last vote a year ago last January was stronger against the closing of the bar than its predecessors.  It cannot be reasonably be said, therefore, that the hotelkeeper’s decision in the matter of his bar trade was for the purpose of heading off tempe rance agitation.  Mr. Maundrell is a strict teetotaler and he states without the slightest reserve that his great objection to whiskey is because several of his immediate relatives died because of too frequent use.

Mr. Maundrell’s action has been widely noticed an commended.  His conclusions bear out views often expressed to the effect that drunkenness and real intemperance are due mainly to the sale of spirituous liquors and less to the consumption of beer and light wines.  A Toronto newspaper took the trouble to interview Mr. Maundrell and this is what he said: ” My decision to refuse to sell whiskey and other hard liquors over the bar and to restrict my bar sales to beers and soft drinks, was not reached without a good deal of Thought.  I have been in the hotel business over 21 years and my experience has shown me that nearly all the harm done by the hotels comes from dispensing the strong drinks.  The difference around the hotel since the change is marvelous and I would rather go out of business altogether rather than return to the conditions under the old bar business. When I tell you that my sales of whiskey ran as high as 75 cases a month, you can see that I have made some sacrifice but I decided to make it and am willing to stand by the consequences. The satisfaction of having a quiet hotel is a good compensation and the absence of drunks on the street is pleasing to myself and the people of the village.  I still keep a little whiskey in the house, but this is not sold except to travellers in their rooms or locally on doctor’s certificate.  The strange thing is that the only objectors are among my strongest friends who helped defeat local vote.