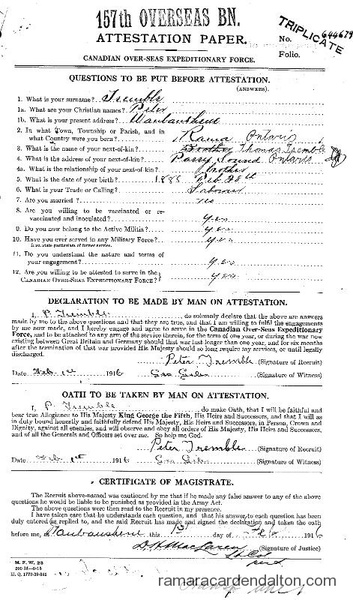 I live in Simpson, a village in Buckinghamshire, England. I am researching the history of my house, Simpson House, which was built in 1830 by Charles Warren. Charles was the uncle of Thomas Goodman Warren, who emigrated to Beaverton, Ontario in 1870. After arriving in Beaverton, it appears from your website that Thomas married Isabella Scales and they went on to have 9 children. Thomas died I think in 1929.
Charles Warren, his uncle, became a prosperous farmer and landowner, owning some 70 hectares of farmland, several houses and other land in Simpson village. During my research I discovered that Charles, who had no children from his two marriages, had an illegitimate son, William, after an affair with a young local woman. When he wrote a will in 1868, he divided his estate between his son William, his nephew Thomas, and another nephew called William Bond. In 1872 – two years after Thomas emigrated to Beaverton – Charles became seriously ill. And this was the start of a mystery, because just 12 days before he died, Charles completely altered his will, to totally exclude his son from receiving any of his estate; instead leaving all his possessions, land and properties to be split between his two nephews, Thomas Goodman Warren and William Bond (the son of Charles’ sister, Martha).
I have no idea why Charles, if he was in his right mind, would want to disinherit his son. He had always recognised him as his ‘natural son’ and paid for him to go to boarding school. One possibility is that his nephew William Bond – who stranded to gain half of the estate – conspired with Charles second wife to persuade his uncle, by then ill and confused, to change the will.
But what of Thomas Goodman Warren? Was he aware that he was a beneficiary of the 1868 will? If he was, why did he emigrated to Canada in 1870?
Where was he when his uncle died and did he play any part in the mysterious change to the will? I discovered that all Charles Warrens possessions were sold off in 1874 and Simpson House was sold in 1875? Did Thomas ever receive his share of the estate?
I am hoping that the answers to some of these questions may lie in your archives or there may be family members, descendants of Thomas and Isabella, who might hep solve the mystery.
Send reply —this site