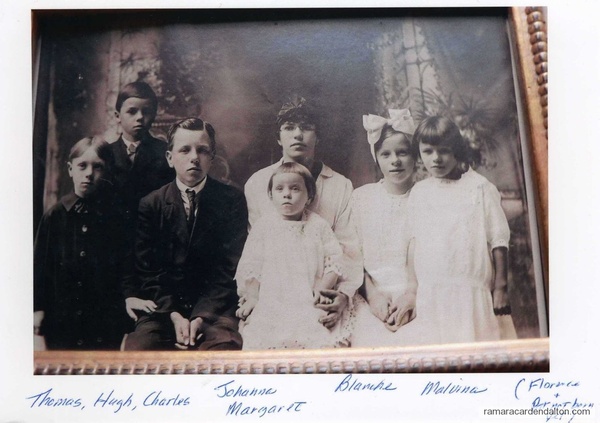 I came across this piece about the Point Mara Kennedy family and I thought
I would share. One of my McDonald family married John Alexander Kennedy and
later lived in Manitoba.

“In his will, dated 12 August 1847, Alexander Kennedy bequeathed five acres
of the extreme point on Point Mara as a site for a Roman Catholic Church.
Among the earliest settlers of Point Mara, Alexander began purchasing land
as early as 1827. Like other early settlers, he apparently had ties to
other locales and dwelled intermittently in the Township of North
Gwillimbury. Three known children of Alexander were: Jane, who married
Edward Doucette, Angus, and Donald, also known as Daniel. All three resided
in Mara Township. Jane and Edward resided on the West 1/2 of Lot 14,
Concession C. Angus and his wife Josephine or Josette (Dolloy?) settled the
East 1/2 Half of Lot 14 Con C. Donald and his wife Mary Brown resided on
part of Lot 16 Con C. Mary or Martha, as she was also known, was of
Presbyterian faith, and so they were buried, as were several of their
offspring, in the Stone Church cemetery. From Donald’s death registration,
came his mother’s surname–Chaney. Included with this information was her
birthplace, Manitoba. This was the only information found regarding the
mother of the Point Mara Kennedys, but it brought to mind the name of
another South Mara settler, Chenier. Perhaps it was only a coincidence that
in 1834 Francois Chemminerie [sic] [Chenier] purchased the South part of
Lot 16 Con B from Alexander Kennedy of North Gwillimbury