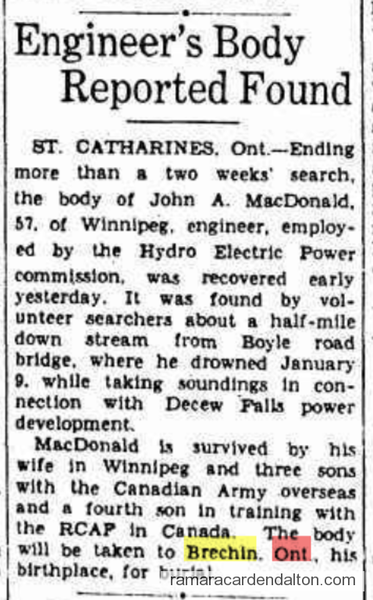 The Fitzgeralds of Carden Township

Richard Fitzgerald was the son of David Fitzgerald and Catherine Finell. His father, David was born in 1787 in County Tipperary Ireland. His mother, Catherine was also born in Ireland and died there in 1825 during childbirth. After Catherine’s death, David married Ellen Rice, a native of County Cork Ireland who was 26 years his junior. Together they had 10 more children.

Richard Fitzgerald, son of David and Catherine, was born on August 27, 1825 in Ireland and immigrated to Canada in 1852 with his father, step-mother and ten half brothers and sisters.

Richard was the first Reeve of Carden Township and the Village of Kirkfield and served for 12 successive years. He also taught school and was the superintendent for 11 years in Ontario. Richard and Mary are buried at Victoria Road Cemetery and their tombstone reads “Richard Fitzgerald born 1823 and died 16 March 1899 at the age of 76 years; Mary Fitzgerald born 1830 and died 3 April 1872 at the age of 42 years”.

There is a story in the Lindsay Post dated December 13, 1894 that describes Richard Fitzgerald as follows: “The Story of an Ex-Reeve of Carden Township: There are few men better known in Victoria County than Mr. Richard Fitzgerald, who was one of the first settlers of the township of Carden. He was elected to the honourable position of reeve of that township and filled the position for twelve successive years, and filled the position with so much acceptance to the people that he was pressed to continue in office for a longer period, but was compelled to decline the honour.It therefore goes without saying Mr. Fitzgerald is not only known to all residents of the township but that his work is considered by those who know him to be as good as his bond, and that upon anything he may say the most implicit confidence may be placed.

When young, a stronger or more hearty man could not be found, but possessed of an iron constitution, he did what too many are prone to do, neglected his health, and exposed himself to all sorts of weather, often in the pursuit of his calling as a farmer being wet to the skin for hours at a time. A little over seventeen years ago he found that he had contracted rheumatism of a muscular form, and each succeeding day found him in a worse condition. He applied to local doctors in his neighbourhood, but received no relief, and was then induced by them to apply for admission to the general hospital at Toronto for treatment, and was in that institution for several months, until he became disheartened at the want of success attending his treatment and returned home, as it was thought he would die. By this time the muscles of his body had become so contracted that he could not straighten his limbs, and was forced to spend the greater part of his time in bed, and when able to get around at all it was only with the aid of a stout pair of crutches. When he attempted to raise his feet his legs would crack at the knees like sticks of wood, caused as the doctors told him, by the fluid in the joints being completely dried up. He was constipated to a fearful degree. When he retired at night there was not enough blood in his veins to keep him from feeling intensely cold and in order to keep him warm his daughter knitted him woolen leggings and lined them with soft wool. Several times his family, a portion of whom reside in Michigan, were summoned home to see their father for the last time., as he was thought to be on his deathbed. Finally after suffering as much bodily pain as would have killed an ordinary man, and at a time when he had not set his foot on the ground for a year, he was induced by his son to give Dr. Williams’ Pink Pills a trial, as he had heard of the many remarkable cures made by that remedy.It was after much persuasion that he was induced to give them a trial after he had spent a small fortune in medicines and different modes of treatment he had steadily grown worse and he had despaired of finding anything that would help him. At last he began to use the Pink Pills and had not taken them long before he began to notice a decided improvement in his condition. Continuing their use he found he could get around much better than he had been able to do at any other time in years, and after a still further use of the Pink Pills he was entirely relieved from all rheumatic pains, and is a wonder to all who knew him. Mr. Fitzgerald is not 70 years of age and is able to walk to Kirkfield every day and is enjoying better health than he has had since he was first affected.”

There is more to the article but it is an advertisement for Dr. Williams’ Pink Pills and the particulars of its efficacy in curing all types of ailments. Richard Fitzgerald was known as an immigrant, a farmer and politician but never did we know about this long struggle and recovery in his later years

The children of Richard and Mary (Sweeney) Fitzgerald are as follows:
Minnie Fitzgerald was born c1857 in Canada. She married a man named Mebrod (not sure of his first name) and had 3 children: Laura Mebrod who married a man with the surname of Burns and lived in Detroit, Michigan, USA; Florence Mebrod who was married and also lived in Detroit,
Michigan, U.S. and Birnie Mebrod

James Fitzgerald was married and had 2 daughters: Annie Fitzgerald and another girl.

Jack “John” F. Fitzgerald was born in 1870 in Canada and died in 1959 in Phillips, Wisconsin. He had a twin brother who died at birth. His mother, Mary Sweeney, died a short time later and his father never remarried. John’s two sisters, Kate and Minnie, raised him. John had a hotel in Niagara Falls, New York and from there he moved to a farm in Philips, Wisconsin, USA where he died in 1959 at the age of 89. John married Jenny Sherrette (1886- 1965) in Phillips, Wisconsin and had 5 children: Patricia Fitzgerald (died in her early teens); Richard (1912 – 1982) m Mary unk; Lyle Fitzgerald (unk); Lenore Fitzgerald (1922 – unk) m George Hudak; Leona Fitzgerald (c1911 – 1989) m Adam Baratka.

We know that around the turn of the century the land in Carden and surrounding area was becoming exhausted from farming and forestry. The soil was very thin and the farmers could no longer make a living from the land so many moved away. This was very common at that time – it was either go south to the U. S. or go west to Western Canada. In the Fitzgerald family, five of Richard Fitzgerald and Mary Sweeney’s six children moved south to the United States. Patrick Fitzgerald was the only one who stayed in Carden. Being the oldest son, he probably inherited most of the farm when Richard died in 1899. Patrick was a successful farmer in Carden Township and as families packed up and left for better opportunities he bought a lot of their homesteads and therefore acquired a lot of land. While his wife, Catherine McNulty, was known as a rather serious and businesslike person, Pat was very easygoing and together they helped out their family and community where and when they could.

Pat and Catherine had six children. John was killed by a gunshot when he was 16 years old and Emily died from tuberculosis when she was 21. Both are buried at the Victoria Road Cemetery on Victoria Road. Anna married Jack Foley from Carden and moved to Saskatchewan. Mary married Jack McElroy from Carden and settled in Mara Township. Leo married Nellie Cassidy from Carden and lived for a while in Saskatchewan before returning to Carden. Bill married Elizabeth Miller and after her death married Annette MacZuck. He was the only child from Pat and Catherine who stayed in Carden Township and raised his family on Fitzgerald land.