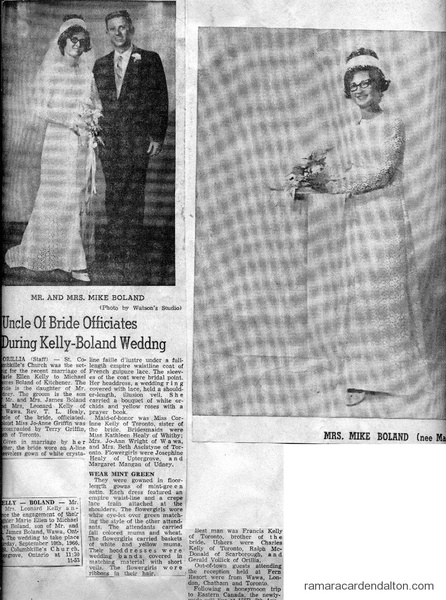 the story of THOMAS JOSLIN’s settlement in Dalton Twp.

Thomas Joslin, [1842-1929] was born at Crabdown Farm, Ashreigney, Devonshire, June 6, 1842, the eighth of nine children born to Thomas and Honor Richards Joslin. His siblings were Mary b. 1826; Samuel b. 1827; Annie b. 1829; Elizabeth b. 1832; John
b. 1838; William b. 1839; Honor b. 1840; and Silas b. 1845.
He came to Canada on a sailing ship, from Devon, in April 1852, with his father Thomas Joslin [1802-1880], landing in Montreal on May 8th. This date is known as he told his grandson, Roy Joslin, they had arrived in Montreal the day after his 10th birthday, which he reported wrongly in 1901 census to be 7 May 1842. The Montreal Gazette records the arrival of the sailing ship “Secret” on that date out of Bideford, Devon. They traveled on to Toronto by steamship, up the St. Lawrence and across Lake Ontario, arriving in early May. It had been his father’s intention to establish a home in Ontario and bring the rest of the family over later. Unfortunately, on their arrival in Toronto his daughter, Annie Turner, informed her father his wife Honor had died suddenly on April 14th. Their father returned to England leaving Thomas in the care of his sister Annie, age 22 and her husband Robert Turner, age 37, and brother Samuel Joslin, age 25, who had sailed to Canada, and traveled together to Toronto in the summer of 1851.

After living with the Turners for a time in Davisville, where Robert and Annie had their home and a market garden, he was apprenticed to a farmer on Yonge Street, near Lansing or Langstaff. On completing his apprenticeship he continued working as a farm labourer, slowly moving northward through York County, until at the age of 18 he was in West Gwillimbury, in Simcoe County. It was there he later met Sarah Ady, [1852-1919] the daughter of William and Rebecca Ady [Eadie] who came to Canada West from County Tyrone, Northern Ireland, in 1834. Thomas and Sarah were married in St. John’s Presbyterian Church, Coulson’s Hill, on November 17, 1866. They moved to Oro Township in 1867, and farmed on Lot 25 S1/2 and BF Lot 26 E in Concession 9, consisting of 129 acres, rented and then purchased from Mr. John Alexander of Barrie. Their house stood on the west side of Line 9 where Burt’s Creek crosses the road. It was here their first child Joseph Thomas [Tom or Young Tom] was born on 6 December 1868. There were only 40 or 50 acres of arable land as the lakefront lot was stoney and the back lot swampy. In the winter of 1870 Thomas purchased 100 acres in Dalton Township, Lot 28, Concession 9, near Sadowa, adding later two additional 100 acre lots in Concessions 9 & 10. Thomas and Sarah Joslin moved from the farm in Dalton around 1908 and retired to live in Coopers Falls. Sarah’s parents,William [1800-1860] and Rebecca Donaldson Ady [1800-1886] are buried in St. John’s Presbyterian Cemetery, Coulson’s Hill.

As there was no school in Dalton, Young Tom was sent to live with his Aunt Annie Turner and attended the Davisville school in Toronto for three years until a school was opened at Sadowa. He became a carpenter and blacksmith, with a shop in Cooper’s Falls. Young Tom, Joseph Thomas [1868-1944] married Adelaide Gertrude Hepinstall, [1872-1962] in 1892. They moved to Hawkestone in 1912 when Tom purchased the blacksmith shop opposite Stone’s General Store, then built a shop across from the United Church with the family home beside it to the north. Their older children, Clayton, Garnet, and Hazel, were working; Hazel was employed at Stone’s store. The younger ones, Roy, Walker and Pearl attended Hawkestone school.
Clayton [1893-1956] who was lumbering in Muskoka, married Hildred Brown of Bracebridge in 1926.
Garnet [1896-1966] on his return from service with the CEF in England and France in 1919, married Jean Smith, daughter of Archie and Ida Deacon Smith of Hawkestone. Hazel [1898-1957] went to work in Muskoka in the hotels, and married Charles Fullerton in 1917, a Captain with Muskoka Navigation Company.
Roy [1901-1972] completed his education in Barrie, and worked briefly there in 1920 in the Express Department of the Grand Trunk Railway and then with Canadian National Express in Toronto and various locations throughout Ontario. He married Margaret Wilson, daughter of Olaf and Maryann Wilson of Washago, in 1923.
Walker [1903-1952] went to work on the Great Lakes freighters in 1919, and attained his master’s papers before 1930. The depression ended that career and he joined the Ontario Provincial Police in the early thirties and married Margery Keeler, daughter of Will and Minnie Keeler, of Innisfil Township, in 1931. At the outbreak of war in 1939 he joined the Royal Canadian Navy Reserve and captained a converted minesweeper for the duration.
Pearl [1906-1999] on completion of her education was employed in the Provincial Registry Office in Barrie. In 1931 she married Elmer O’Brien, son of William and Iva O’Brien of Hawkestone. Elmer was the postmaster at Collingwood and Orillia.
Dorothy, their seventh child born in 1917 died in infancy.
Gordon [1918-1963] attended school in Hawkestone, worked in the family garage business with his father, served in the Royal Canadian Army Service Corps in Europe during World War II, and in 1947 married Mary Crompton of East Oro..
Bonnie Marie [1921-1929] adopted at birth, died one week after her grandfather Thomas Joslin, [March 2, 1929] who had come to Hawkestone to live with Tom and Addie some time after Sarah Joslin died at Silas and Libby’s in North Orillia, in 1919.

Thomas and Sarah Joslin had three more sons born on the farm in Dalton Township. In the ten years between Tom and Silas, Sarah had four children, two boys and two girls, who died in infancy.
Silas [1879-1946] married Libby Rennie, and after lumbering in the Cooper’s Falls area farmed in North Orillia.
John [1884-1960] married Nell Snider and farmed the 300 acre home farm in Dalton.
Norman [1890-1936] married Lucy Remblard, and also farmed in North Orillia.

During the 1920’s and 30’s the automobile had come into it’s own, and the Hawkestone blacksmith shop became a garage, and Tom a fine mechanic and a McColl-Frontenac gasoline dealer in 1927. But he kept his forge and anvil and would still shoe horses, re-tire wagon wheels, repair sleighs and farm machinery for local farmers, fix bicycles and wagons for the village children and articles for the lakeshore cottagers.
Tom Joslin died unexpectedly, on March 7, 1944, of pneumonia, contracted after falling through a crack in the ice, while walking to shore from his fish hut on Lake Simcoe.
Addie lived on in Hawkestone for a number of years while Gordon operated the garage. She then moved into Orillia and lived with Pearl and Elmer O’Brien until her death, December 28, 1962.
Doug Joslin, 21 February 2013