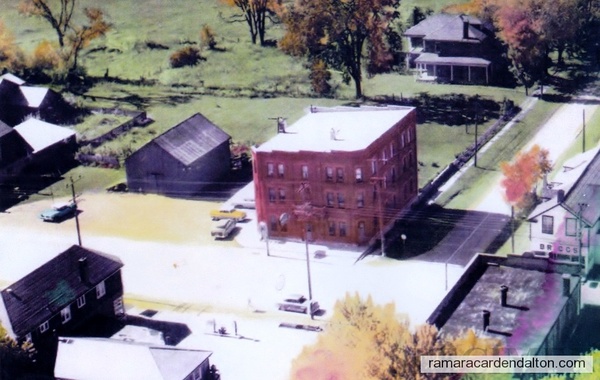 RAMA AND MARA TOWNSHIPS WERE ONCE UNITED

The first settler was Patrick Corrigan who came her in1832 and settled near Shepler, also Dungannon because of his coming from that town in the north of Ireland. Then Arthur Kelly came a few years later.
SETTLED BY HIGHLANDERS
North Mara was largely settled by Highlanders from the Western Islands of Scotland and later from Glengary in Eastern Ontario. Scotchmen also settled in Thorah and in the south end of the township, Point Mara. Prominent among these families were the Bruces, Gilchrists, Grahams, Waddells, Kennedys, Mcdonalds, McRaes, Ritchies, Campbells, McNabbs and Mc Millans. About the center of this township more Irish men congregated and the names of McDermott, Doyle, O’Boyle, Harahy, Fox, Duffy, McNulty, McLennan and Foley are prominent. The first white child born in Mara was James Wadell.
UNITED 16 YEARS
Mara was united with Rama for the first 15 years from 1854 to 1869. The first settler in Rama was Captain Garnet whose daughter married James McPherson. He was reeve of the united townships for many years and his children were the first white children born in Rama. Thomas McDermott who lived near Shepler, was Reeve of both townships for a term and opposed the building of a railway through Mara.
The first mail carrier was Kenneth Campbell who walked from Beaverton once every two weeks to Whitby Township Post Office which was kept by J.B. Warren one and a half miles east of Whitby. A subscription was raised to pay him and recipients of mail also paid for their letters when received. His son, Rev. Father Kenneth A. Campbell, was the first resident priest at Uptergrove, attending the Catholic Church in Orillia at the same time. Murdock Johnston and George Thompson elders of the Presbyterian Kirk, rendered most important service to co-religionists in holding services both in Gaelic and in English. They received much assistance from Rev. Dr. McTavish of Beaverton.
MARA’S FIRST REEVE
The first Reeve of Mara was Philip McRae, descendent of a Scotch pioneer family. He was Warden of the County of Ontario in 1874. Mr. McRae was succeeded by James P. Foley, the first Postmaster and storekeeper of Brechin and Brechin was named after the birthplace of his wife in Scotland. At their deaths, valuable bequest were left to the church and the school of Brechin.
Mara Township as well as Thorah was surveyed in parts, the first part of Mara being surveyed in 1824.