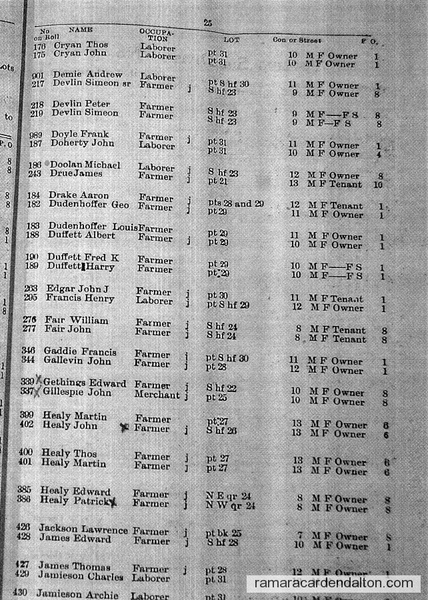 James Kett was a lad of about thirteen years when his father Francis sailed from England and settled in Prince Edward Island. He was educated in the schools of the province and his father taught him agriculture. He had a studious mind and of a very serious religious trend. He later in life became a local preacher. His father had given him the “Fourfold State” a book on theology by the famous theologian Thomas Boston of Scotland. So this text and the Bible became the foundation of his life and his preaching. He composed some very fine poems and his handwriting was much admired.
Because of the severe climate of the Island farming was limited to the raising of potatoes, oats and cattle. Less hardy crops could not withstand the severe winter’s cold. Soon after the arrival of their 7th child, James decided to leave P.E.I. to seek better opportunity for his expanding family on the mainland of Canada. Their voyage down the St. Lawrence lasted 3 stormy days. They glimpsed banks lined with foliage and rocks, a myriad of tiny islands and even a whale. They landed on the northern shore of Lake Ontarion at Port Hope, and later settled in Whitby. After a few years, they moved further inland into Mariposa Twp. where they settled, they once more took up farming, and brought most of the family to maturity. The family was fast growing up and some of the daughters had already married. Because James wanted to keep his family together, in 1865, he took claim to one square mile of farmland in the new section of Dalton Township. This was acquired by grant from the Queen of England. He named the place Sadowa after a town in Bohemia, one of the contested stations in the 7 year war, 1756 to 1763. James Kett died in Sadowa at the age of 86 years and 4 months. He was taking his usual morning walk in the yard when he suddenly seemed to collapse. A grandson helped him to the house. Then, “He was not, for God took him.”
His body lies in the little cemetery near the new frame house.