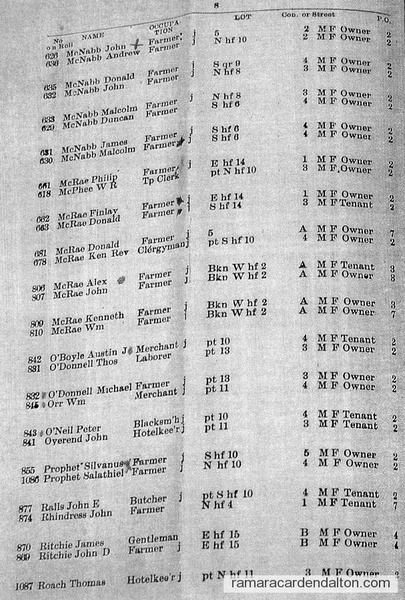 The Egan Family first settled on a farm where modern Oakville now stands. They moved to Mara about 1871 and settled on lot 17 Con 9
(In downtown Millington)
PAT EGAN

Egan Family History
Patrick and Bridget immigrated to Canada with Patrick’s first cousin John Flannery(b. 1822 in Offlay) and settled in Trafalger Twshp. near Oakville Patrick and John Flannery were cousins which meant either Patrick’s mother was a Flannery or John’s mother was an Egan. To complicate matters, Patrick and John married two sisters Bridget and Mary(b. 1827 in Offlay), Note – in the book “They Came To Mara” Mary Flannery has the last name Cavanagh instead of Cavan. I think this is wrong because I have my grandfather’s(Thomas) baptismal certificate and his mother is listed as Cavan. I need to verify this further.
Patrick Egan remained in Trafalger for some years until a fire. The story of the fire is that Patrick and Bridget left the house to find a lost cow in the bush, when a fire broke out. 3 of the children died in the fire. I’m guessing the fire happened around 1869 or 1870
I’m not sure if my grandfather (Tom) was born before or after the fire.(I have a lead at the oldest parish in Oakville and perhaps the church records can clear some of this up). My father and his brothers and sisters always said that they seldom questioned my grandfather about the fire because he would become emotional whenever they brought it up. This tells me that he may have had a childhood memory of the event
By 1871 Patrick Egan followed his cousin John Flannery and moved his family to Mara. Bridget never got over the lose of the children and Patrick felt it would help to leave Oakville (It is said she kept the bones of the dead children with her and they are buried with her in Uptergrove)
Frank was NOT the only surviving son of the fire. My grandfather Thomas(the youngest b. 1866) and John(the oldest b. 1851) also survived. I believe 3 others died in the fire.
Peter Egan(b. 1901) was Frank’s youngest son and he was found dead in the old house in Millington in 1971. His oldest brother John Joseph(1893-1957) married Rose McMahon(1891 – 1974). Joe, as everyone called him ran the post office and garage at Millington, Patrick(1897 – 1915) and Thomas(1898 – 1905)and James(not sure of dates) all died young.
John was the oldest and I think he was born in Ireland in 1851. He married Mary Healy(1850 – 1903) and they had 9 children.Thet were– Hanora married Pete Corrigan, Mary married Jack O’Connor, Ed married Margaret Kehoe, Thomas(not married moved to New York with Ed), Theresa married William Westlake, Anne married Louis Clutchey (moved to Saskatchewan), Jack married Gertie Harrigan (lived in Fort Frances), Monica(unmarried) and Martin married Ella Whalen and lived in Uxbridge.
John, Frank and Thomas and the others were the children of Patrick (b. 1824 in Offlay, Ireland) and Bridget Cavan(b. 1829 in Offlay WE went to Ireland in 1988 and visited an old Monastic site called Clonmacnois in Offlay near Athlone on the Shannon River. It is called the Place of Seven Churched and dates back to the mid A.D. 500’s. This is the place where Patrick(my great grandfather) was baptised. There is a huge graveyard among the ruins and within minutes of being there we found an area with many tombstones with Egans and Flannery names.
According to my aunt Veronica there were 7 Cavan sisters and some of their family names were Egan, Flannery, Coughlin, Sheerin and Weir.
.
There is a story that Patrick’s father who served in India in the Imperial Army for over 20 years. He acheived the rank of Lt. Colonel. I have searched the Internet and found a Kingston Egan(b. 1780) of that Rank serving in India from about 1796 until 1829. He became ill in India and died at the age of 49 in England. This would mean that he died when Patrick was only 4 years old. My father told me that in the 1950’s Joe Egan showed him an old revolver and some other military things belonging to their great gandfather but unfortunately they had disappeared by Pete’s death 1971
I have more work to do on this but I hope this helps.
Pat