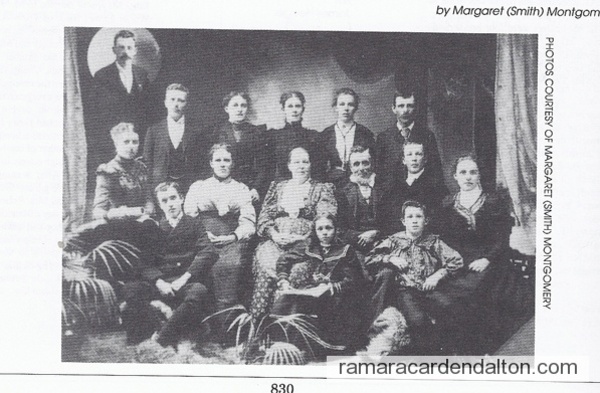 Carden, north of Eldon; Dalton, north of Carden; None of them were surveyed until after 1830 The division between the limestone and essentially granite areas is distinctly marked by a ridge From Bexley the Talbot River flows into and through the southern part of Carden Longford A portion of these waters was surveyed for a canal route in 1835 by N.H. Baird
The mighty Black river floes thru northern Dalton and the Head river wonders back and forth across the boundary of the two townships
Gillespie, Murtagh, Quigley and Richmond in Carden Gardiner, Montgomery and Thompson in Dalton.
. The Dexters, early settlers in the northwest part of Carden, built a mill and the Fitzgerald family built a mill in southern Carden on the Talbot river

Carden and Dalton 1,027 inhabitants and 5,233 improved acres. By 1881, Carden, and Dalton have increased in population less than one-half, Dalton’s few settlers in the 1880’s were at the south. At least two thirds of Dalton is huckleberry plain. In Carden the early settlements were to the southeast and northwest of the tamarack and balsam plains, which occupy a large area in the centre of the township
The only white men who came into this northern district were a few traders who had established posts to barter with the Indians for pelts  But by and by the fur trade had to give way to the timber business, and lumbering soon brought settlement. Carden and Dalton 1,027 inhabitants and 5,233 improved acres in 1871 The equalized assessment valuation of the municipalities in that year was Carden and Dalton $90,558
By 1881 Carden, Somerville and have increased in population less than one-half, In 1879 Dalton had 93 ratepayers ; Carden 191.