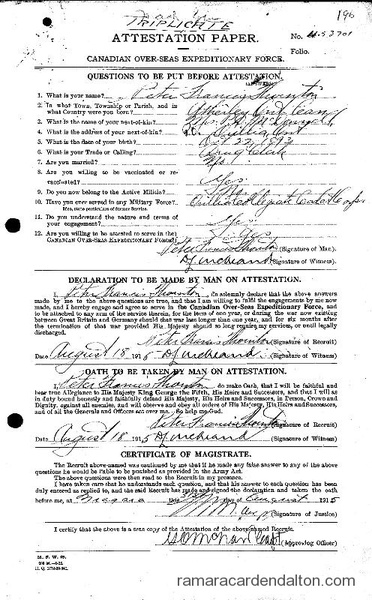 On Monday, May 24th, 1915 one of Bexley township’s finest women died in the person of Mrs. Wm J. Alton. She died in Wellesley Hospital at the age of 47 years. She had been in poor health for the past three years but was taken very ill in April and was for some time under the care of Dr. Ross, of Kirkfield, and Dr. Grant of Woodville. On May 15th, she was removed to Wellesley Hospital, Toronto, where she underwent an operation for cancer, from which she never recovered and died on May 24th. She is survived by her husband and one son and one daughter at home, and two brothers , Mr. John Alton, Reeve of Carden township and Mr. Wm. Alton, jr., of Carden. Her husband, son and daughter accompanied her to Toronto and remained till after her death, where she passed peacefully away surrounded by her family and her brother John. Although suffering intensely all through she was ever bright and cheery and spoke often of the heavenly home to which she was so fast going and when the call came she was ready and willing to go.

She was born in Michigan in February 1868 and was the only daughter of the late Mr. and Mrs. John Alton. In early life she removed to Carden with her parents. After her marriage she lived first near Lindsay and then moved to their home two miles from the village of Victoria Road, to which her body was brought on Tuesday night, May 25th. The funeral, which was the largest ever seen in Besley township took place on Tuesday afternoon, May 27th. Mr. Stoddard, undertaker, of Woodville, was in charge of the funeral; Rev. Mr. Burns, Anglican clergyman, of Coboconk, conducted the service at the house and at the grave, and Miss Mabel Lytle furnished the music. Her body was laid to rest in Kirkfield cemetery beside her father.