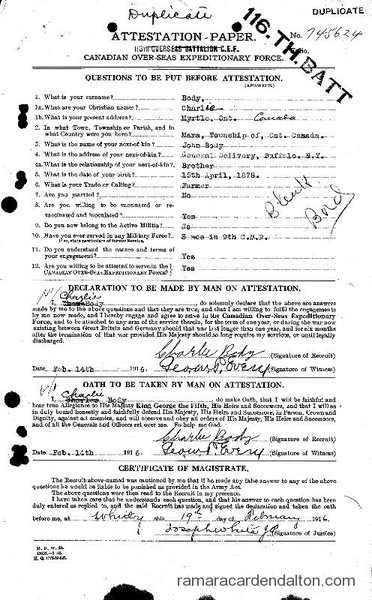 The derailment, believed to have been caused when a car struck the 35th van of the 70-piece freight at the 11th concession, left hundreds of feet of track, 24 rail cars, the station house and an automobile in a twisted mess. The track is expected to be blocked for three days.

Driver of the car, William McLaughlin, 21, of RR No. 1, Orillia, was taken to the Toronto General Hospital after receiving emergency treatment for internal head and leg injuries at Soldier’s Memorial Hospital by Dr. W. J. Donevan.
Isabel, 16, Jacqueline, 12, and Sandra, 2, daughters of Mr. and Mrs. Jack Wilson, escaped with a shaking up. They were alone in the house when the massive steel cars crushed the side of the building. Mrs. Wilson, a nurse’s aid at Soldier’s Memorial Hospital was on her way home from work at the time of the accident and arrived within minutes.

A neighbour said she saw the mother crawl under the pile of twisted steel cars to reach her children. The father, a section foreman, was at work in Nakina, near Geraldton in Northern Ontario.
“The crash sounded like an explosion,” said neighbours, Mrs. John Juffs and Mrs. Archie Newman who live near the tracks.

FIND AUTO
____________
It was not until after the train station crash that anyone knew there had been a derailment due to a collision with a car at the 11th Concession of Mara Township, a mile down the track from the station. Brechin Provincial Police and trainmen probed the darkness and came upon the shattered remains of an automobile and the injured McLaughlin at the crossing.

Special CNR agent William Brookes of Toronto said that after the westbound car apparently struck the southbound freight, the derailed vans straddled one of the two tracks, with one side of wheels cutting deep into the centre of the wooden rail ties for almost a mile until the eventual collision with the station.
The rail cars were loaded with steel, lumber and other northland products. Workman arrived early Monday morning to start the task of clearing up the tracks, which is one of the main CNR lines to the West and is known as the “Bala Subdivision” by railway personnel. Almost a mile of track will have to be re-laid, one rail official said.
Russell Shaw of Barrie, CNR Police, said since this busy line will be blocked for several days, trains are being rerouted through Barrie’s “Allandale” station.

NO WAY OF KNOWING
_____________________
Mr. Shaw said that engineer Al Jakeman of Mimico had no way of knowing anything was amiss with the freight cars before the station crash. He said the only way to tell is by a broken air connection, which only occurred when the cars smashed into the Udney Station.
The engine, the caboose and the remainder of the rail cars stayed on the tracks and were rerouted through Brechin.

Mrs. Wilson is believed to be staying with her son in Rathburn at present. The older girls attended school as usual. “It’s lucky it happened on a Sunday night,” she said, referring to the fact that her two other sons, who were not home, usually sleep in the ground floor bedroom, which was almost totally demolished.