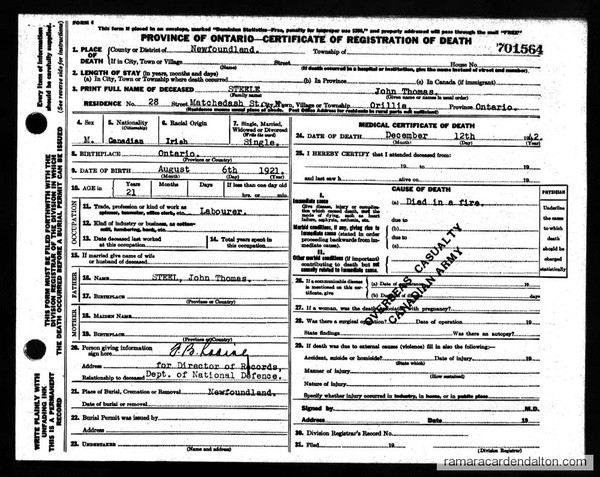 Garnet Stewart was born in Uphill, Sep. 10,1920 He enlisted in Lindsay’s Midland Regiment on Aug6 1040 and first worked as a truck driver

Garnet took basic training at Lindsay Armories. The didn’t have uniforms but were issued boots and helmets. They marched to Orno sleeping overnight in ball fields ad armories The Midland regiment was used to guard Hydro plants. He traveled across Canada from East to West and back East again. He sailed oversees from Halifax on the Ile de France
He trained in England until D-Day as a Cameron Highlander .He landed in Normandy on D-day and fought through France, Belgium and Germany and was on rest leave in Holland as the war closed He was driver for a Machine Gun Carrier
He returned to France twice and attended reunions of the Midland regiment every May and the Cameron Highlanders every October in Ottawa .He was a member of the Brechin Legion
He never forgot D-Day But lived a succesfull life as a welder farmer and lock operator for the Trent Canal
Garnet married Margret Thresher in 1946 (54 years) and raised six children
He was a member of the Victoria Masonic Lodge in Kirkfield and also a member of the Dalyrimple United Church