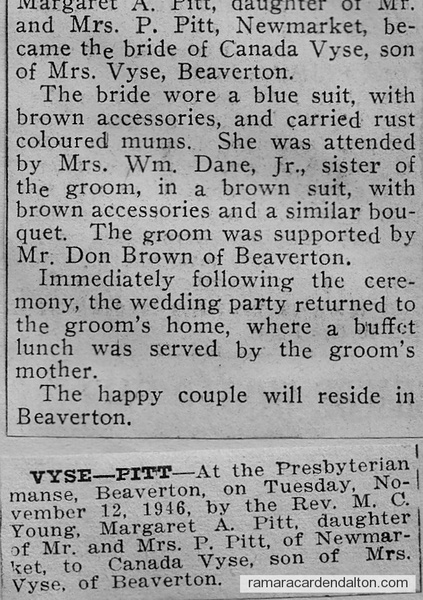 A sister, Myrtle came to Estelle’s home, January 9, 1892. A red head, some said, “There’s no rid about it, it’s rausburn.” A rugged child and taken to Aunt Alice’s heart along with Estelle, until 1893, when Aunt Alice married and moved to the far Fox hill. By her second birthday, Myrtle rocked herself by swaying one foot back and forth, humming until drowsy. By her 4th birthday she could read to her own and Susie Taylor’s delight, as both found it fun. Then to the log school for its final day of use and over to the new on Hargrave Hill. But weariness overcame this youngster so Mr. Rutherford let her sleep in the afternoons. Misses Cameron, Kelly and M. Day taught in succession and how prosaic it all seemed. Perfect Spelling seemed to take the top line and that was not Myrtle’s flare – Arithmetic and literature were. However listening to the oral classes of senior classes was stimulating and very informative.

Estelle’s chums were happy, genial girls, Myrtle’s were quarrelsome and jealous which made the weeks dull and occasionally she was given a day at home to pep up.

Summer holidays were delightful while the Lees spent every day on relatives’ farms, but in 1901 they, Aunt Nellie’s family and Aunt Teresa migrated to Zion City to be Doweyites, who ate no pork and believed in Divine Healing, also that the earth was flat. Summers then were quieter but the graham sisters could drive so had many jolly visits at homes of many Days and other relatives and friends.

Myrtle’s musical talent was only average so her pianoforte and vocal rather tried Estelle’s and her mother’s sense of rhythm and tone. But she absorbed much of scores and skill from Estelle’s decisive comments and assistance.

Recreation was skating in winter, swimming at Thompson Shore in summer. A prolonged illness from 11 ½ to 13 ½ left Myrtle behind others in school and late reaching Collegiate, the latter suiting her well and greatly improving her health.

A rural school at Wick for 4 years proved quite a unique experience, tho strenuous. Then Toronto 1916-47 meant work and pleasure unlimited. Grade 8 was her field most of that period, with half of the day in Principal’s Office. Three-part class music was ever her challenge and delight.

Lasting friendships with associates in Church School and Literature Clubs were valued. Much effort in W.C.T.U. yielded satisfaction and concern. Book Reviews and other themes grew into hobby activity, which incurred 100’s of miles of street ca travel and belated rest.

In 1941, Earl Kitchener School became a temporary Normal School so Myrtle transferred to Frankland School of a fine staff but it proved wearing to teach grade 6 or 7. In 1947, laryngitis made retirement imperative. Very fortunate for Mother Graham who had reached 4 score years and so needed care and companionship. Her death in 1951 left the home so changed, but Myrtle seized upon writing of themes as enforced study hobby. Many products resulted, none more engrossing than art, especially the Group of Seven.

Arthritis persisted so that life became very restricted as to travel. However, that seemed not discouraging. Family and Church history grew more engrossing as bit by bit came to light. The Dalrymple Book filled many months, as facts were searched down. The acquiring of photos of former ministers proved drawn out effort but concluded in December 1963.

Chester’s son and daughters were of deep interest to Myrtle and any opportunity to aid them was ever welcome. Their welfare and success were her great concern, perhaps too much so.

1976 finds the nieces and nephew wed and parents of 7 charming children. All 3 families live comfortably and happily, the Feltis and Jones at north east of Graham farm, Jim with 2 handsome homes here and in Prince Albert.

Myrtle persisted in penning the Day history, also that of Dalrymple Parsonage, razed in 1968.

Expo “67 moved her to prepare many skits of pioneer days, acted out by pupils and by adults. Church 75th Anniversary and the pending Church Centennial in 1977 have aroused further writing in hopes of arousing interest in History.

1977 and Sara Marie Graham is 4 months of age and charming. To Myrtle, life is busy but lonely as farmer associates and cousins lessen and letters grow scarce. The Church Centennial has been engrossing, striving to picture the very early era to the committee.

We are renters of the old home, a strange fact but easier for the present. My third pacemaker functions well but I live lazily.

1978 Still in the old home, but we are slower and aging. I’ve had implant of soft lens, a very effort to improve vision. The 8 great nieces and nephews are developing, 2 in Grade 1, 1 in Grade 2.

The sudden deaths and double funeral of Bertha and Emerson Day has been a Dalrymple shock.
By MYRTLE GRAHAM

The scene changes. The last time we were together for a complimentary dinner, our guest of honour was Sara Lynn. Now our guest of honour is Myrtle Elva. In thinking back I think it is most appropriate that we are here tonight. The lady that we are honouring tonight has been a great manager at the Graham Farm. Cooking, housekeeping, reading books and newspapers, discussing current events and reporting on interesting books for the rest of us to read, has occupied her hours. Now in particular, I would like to discuss her bookkeeping. She made it possible for the Graham Farm to function, which has been a big success. At one time the Graham Brothers bought and sold about 500 cattle a year with an increase in weight per steer of 300 lbs. That totals about 150, 000 lbs. I doubt if there was a farm with a similar turnover in Victoria County.

Myrtle taught school in Toronto. She came on holiday weekends and usually brought some new sheet music with her. She played the piano and taught us some of the pieces. I well remember singing, Blowing Bubbles, Oh Solo Mio, Trumpeter, What are You Sounding Now?, Heroes and gentlemen and in wartime, We’ll Never Let The Old Flag Fall. I am still getting pleasure out of her music. The other day Louis and I were loading a load of sawdust and I was humming Oh Solo Mio and some of the Lost Chord. For me it seems to take a little of the tension out of the day to be able to hum some of that music.

Myrtle’s greatest legacy to her family, friends, relatives and neighbours is a better knowledge of our history and ancestry. The countless hours consumed by her research, her determination, and her faithful hard work are admired by everyone. Many people have benefited by her books, articles and programs to church groups. Most of the impact of her hard work, Myrtle has not been able to see but she leaves an account for future generations. None of this knowledge is understood by these little ones but they will grow in the knowledge that their Great Aunt is a gifted author.

We take this opportunity to wish you good health, contentment and continued mental poise.
CHESTER GRAHAM

My 85th Birthday Party was unique. The whole family tree in the home of Lois and Tom. It was unexpected and most festive. Featuring delectable Chinese foods of many wondrous items. The delicious cake was a prize variety, cut by Lois herself, who had baked it. Brother paid the above tribute, which was so warm and complimentary. The response on my part was an analysis of the stages of life, ending with the mellowing 80’s, which hold their gentler attitudes to life and human beings. I hope the Graham family may ever be loving and loyal for generations. MYRTLE January 9, 1977

Congratulations to Miss Myrtle graham who celebrated her 85th birthday on Sunday, January 9. On the previous evening, a family party was held at the home of Tom and Lois Feltis, with Myrtle the guest of honour. We all wish for her good health and happiness in those years ahead. Myrtle has done so much for the church and community, it is hard to express the true feeling of everyone. She has done much family writing. She wrote the Day family history and assisted in writing Dalrymple on the Lake as well as many fine topics for use in the UCW and her friends in Toronto. In fact writing has been her forte in latter years as her health has not permitted her to go out very much. During the 1967 celebration, she was the inspiration for the whole church and community and won a special plaque for the church from the Ontario Government through her efforts.

So many things could be said and should be said but all we can say is Thank You to a great lady.

She and her brothers, Howard and Louis live in the house in which they were born and raised.
Packet and Times.

On Saturday, January 9th, Lois Feltis hosted an afternoon tea in honour of the 90th birthday of Miss Myrtle Graham. The ladies present thoroughly enjoyed themselves chatting with Myrtle and listening to her anecdotes and reminiscences. Although she has not been able to take an active part in community affairs these last few years, her well thought out and cogent comments are welcomed by members of a number of committees. Myrtle’s interest in local and family histories is well known. Everyone wishes Myrtle many more years of happiness.
Packet and Times.