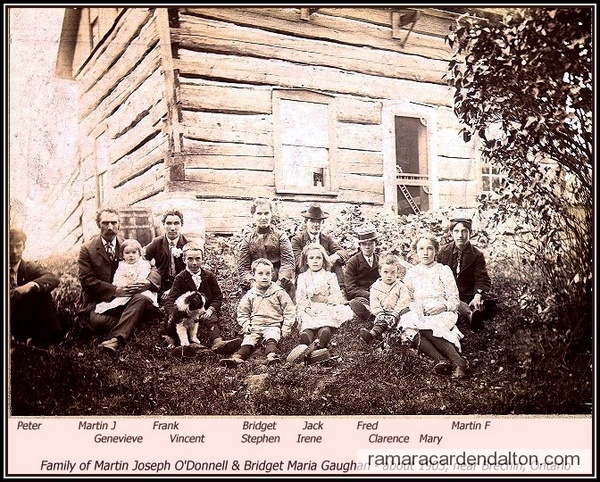 Lieutenant James Seddon GARNETT married Sarah Ann CRESSWELL on April 26,
1816 at Collegiate Church, Manchester. They had four children born between
1817 and 1823 [Jane GARNETT, James Cresswell GARNETT, Joseph GARNETT and
Elizabeth GARNETT]. During the 1820s, Lieutenant GARNETT was posted to the
Isle of Man where the family lived in Belfield House in the town of Douglas.

According to his military service records, Captain GARNETT’s term of
service in the British Army ended in October 1828. At some point in the 1830s,
perhaps due to the outbreak of a cholera epidemic on the Isle of Man, the
entire GARNETT family apparently decided to move to Upper Canada.

They were the earliest settlers in Rama Township, Ontario. Sarah Ann
[nee CRESSWELL] GARNETT died there about 1836 and James Seddon GARNETT
continued to live near Orilla until his own death in 1866.

Their eldest daughter, Jane GARNETT, married a husband named James
McPHERSON. The youngest daughter, Elizabeth GARNETT, married Alexander McDONALD.
One of the sons, James Cresswell GARNETT, married a wife named Elizabeth and
had a daughter named Marianne [or Mary Ann] GARNETT who subsequently
married Benjamin HOPKINS and had a total of nine children. The other son, Joseph
GARNETT, apparently had a serious disability of some kind and died at an
early age without marrying or having subsequent descendants.

Captain James Seddon GARNETT and the other members of his family lived in
the area around Orilla, Ontario.
Of the first settlers granted land in Rama, only the McPHERSONs and the
GARNETTs were successful in surviving on the land.
Being ex-British army officers, Captain Alan MCPHERSON had served 21 years
with the 78th Highlanders and came to Canada in 1835 at the age of 63 and
Captain James GARNETT with the 82nd Regiment of Foot also came late in life,
at age 57. They came complete with grown families and a sufficiently large
accumulation of wealth to hire staff to do such work as was needed. Some
of the other early settlers at Rama found themselves surrounded by
inaccessible bog in the spring of the year, unable to leave their property to
acquire any need whatever.
But the GARNETTs and their MCPHERSON neighbours lived comfortably near
Orillia at their extensive properties on Lake Couchiching. The two families
became even more closely aligned following the marriage of Captain James
Seddon GARNETTâ€™s daughter, Jane GARNETT to Captain Alan MCPHERSONâ€™s son, James
MCPHERSON in about 1845.
The MCPHERSONs started quarrying “… on the lakeshore at Quarry Point
and Geneva Park.â€ť They quarried close to Lake Couchiching because water
transport was the only way available to bring the stone to market. The quarrying
business was primarily carried on by Alan MCPHERSON, the son of James
MCPHERSON and Jane GARNETT.
It is only after the Northern Railway built right through the new quarry
site, about 40 years later, that quarrying really hit the big time at
Longford, or more properly described, at “Vinegar Hill.” That is almost two
kilometres north of Longford, well north of “the stone church” as St. Peter’s
Anglican Church was referred to colloquially, and about the same distance
from the original workings on the shore of Lake Couchiching close to the shore
of Lake St. John.
Captain James Seddon GARNETTâ€™s grandson, Alan MCPHERSON became very
wealthy from the sale of limestone quarried on the land owned by the GARNETT and
MCPHERSON families in Rama Township. Later on, Alan MCPHERSON was joined by
THOMPSON’s Longford Mills in operating its own quarry nearby and these two
were joined by Andrew TAIT, Orillia’s prime shingle mill operator, as well
as John ADAMS, MCPHERSON ‘s brother-in-law, each operating his own quarry
until they all amalgamated to form the Longford Quarry Company, before
1925, and later sold to the Queenston Quarry Company.
The MCPHERSONs were also in the shingle business in competition with TAIT
and THOMPSON and in the lumber business for Laidlaw Lumber company as well
as shipping ” … at least 12 cars per week of lime and building stone to
Port Hope, and shingles on an average of 20,000 a day … he could give
employment to 100 men …”
There were four distinct types of quarrying carried on at Rama. There was
quarrying for building stone. Nearly all quality brick buildings of the
time had window and door lintels of limestone and windowsills of the same.
Then there was quarrying for broken stone shipped to Midland and used in the
iron ore furnaces for making pig iron. Third there was quarrying for crushed
limestone burned in the open-air furnaces adjacent to Geneva Point to make
lime for plaster in the days of the great mansions whose lath walls were
coated with as much as two inches of coarse plaster and finished with 3
/4–inch to one-inch of finishing plaster. And finally there was quarrying for
foundation stone.
Many buildings in Toronto were built with stone quarried from the GARNETT
and MCPHERSON properties at Lake Couchiching and Rama. Casa Loma’s interior
walls were built that way. Longford stone was used for the foundation of
the Ontario Legislative Buildings at Queen’s Park in Toronto in the days
when most foundations were constructed of stone, before poured concrete or
block foundations came into vogue.
Stone from the GARNETT and MCPHERSON quarries was also used in the
construction of Orillia municipal buildings, the Opera House, the Sir Sam Steele
building, St. James’ Court (formerly the YMCA), Toronto’s old city hall,
North Bay’s post office, Orillia’s Guardian Angels Church, Martyr’s Shrine,
Church of St. Joseph Midland, Toronto’s Gooderham and Worts Distillery,
Canada Life building which carries Toronto’s weather beacon, parts of the
Toronto subway, Peterborough High School, provincial parliament buildings in
Toronto, Sebright Church and the Collingwood grain elevator.
But much of the later growth and success of the quarries owned and
operated by the GARNETT and MCPHERSON family at Rama Township took place in the
years after Captain James Seddon GARNETT’s death.