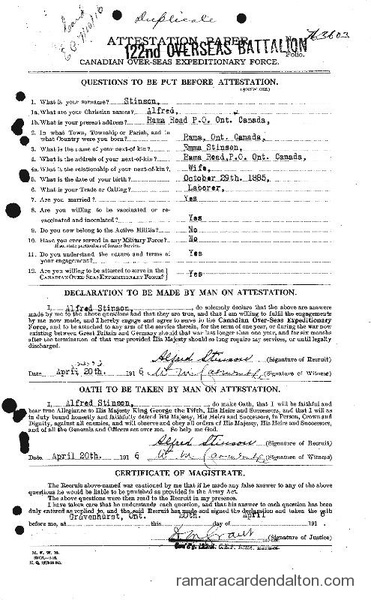 The response of a relatively untrained and unmilitary people was spectacular. Two months after the outbreak of war, an unprecedented armada of 32 transports, escorted by 10 British warships, was convoying 33,000 soldiers from Canada to Britain; and within another four months a complete infantry division of Canadian troops was in action in France, Canada’s total contribution was ultimately to exceed 550,000 or over six times Wellington’s entire army at Waterloo.

The true nature of World War I was thoroughly hidden under mountains of wartime propaganda. Public myths, iterated and reiterated during the emotional excitement of the war years, have a way of embedding themselves for ever in the public consciousness. Tens of millions, and their children, have never met with the painfully recovered facts and this renders re-education all the more difficult.

President Wilson, in his bitter awakening over the peace treaties of 1919, declared frankly: “This war, in its inception, was a commercial and industrial war. It was not a political war.” Francis Neilson expands this statement: “It was a commercial war, planned chiefly by Delcasse’ (the French Foreign Minister), Sazonov (the Russian Foreign Minister), and Izvolsky (Russian Ambassador to France in 1914).” It has been proven that there was no British guarantee of Belgian neutrality and that, as John Burns, MP, explained to Harry Elmer Barnes, the British decision for war was made in 1914 before a word was said about any Belgian issue. “Later,” Francis Neilson adds, :after the trials of the Russian generals, it was found that Russia began it. England was drawn in at the tail end of the chariots of France and Russia.”

Canada, of course, was involved in her turn in lock-step with the British. Sir Wilfred Laurier spoke for both of Canada’s major language groups when he said in Parliament: “today we realize that Great Britain is at war, and that Canada is at war also.” The Canadian government could determine the extent and nature of Canada’s participation, but it could not declare that the Dominion was neutral

By the time the Canadians arrived on the Western Front, the opposing forces were already locked in the trench warfare that was to prevail for three years and a half, with millions of casualties in a desperate ebb and flow of battle. The Canadians’ first engagement was the defence of Ypres with almost incredible resolution in the face of the war’s first gas attack and the collapse of the French troops on the Canadian flank. Foch himself could scarcely credit the exploit. The other chief engagements in 1915 were at Festubert and Givenchy, where stupidity on the part of the Allied High Command resulted in appalling casualties for negligible gains. When the British War Office clamoured for more Canadian troops, Sir Sam Hughes understandably protested that for tactics of the Givenchy sort, not men but Texas steers were wanted.

In 1916 the Canadians again won high honour and suffered terrific casualties in more abattoir-style engagements at St. Eloi and Mount Sorrel in the same Flanders area. Late in the summer, the Canadian Corps, now four Divisions in strength, was transferred south to the nightmare landscape and blood-soaked fields of the Somme, where an inconclusive Allied offensive had been raging for two sanguinary months. The Canadians captured a series of German positions—Moquet Farm, Courcelette, and the so-called Fabek, Zollern, Hessian, Kenora, Regina and Desire trenches. Canadian casualties in this share of the meat-chopper struggle totalled 21,179 while the ground gained by the allies at a cost of over 350,000 killed and wounded was about the area of Mara township. Meanwhile the Canadians had won the highest reputation for their dash, their courage and their resolute steadfastness. Of their quality Lloyd George was to write thus: “The Canadians played a part of such distinction that thence-forward they were marked out as storm troops; for the remainder of the war they were brought along to head the assault in one great battle after another. Whenever the Germans found the Canadian Corps coming into the line they prepared for the worst.”

On April 9th, 1917, in the first stage of the Battle of Arras, this Canadian Corps, with all four divisions attacking simultaneously, carried the hitherto impregnable fortified heights of Vimy Ridge. This was the first exclusively Canadian victory and –for Canada–the greatest battle of the war. It is with historic justice that the tall marble pillars of Walter Allward’s Vimy Memorial were later to be set up on this eminence overlooking the Douai plain. In August, the Corps’ chief battle was the capture of Hill 70, a bold hillock northwest of Lens. On October 26, 1917, the Canadians were on the Ypres salient once more and from there were thrown into an assualt on the Passchendaele Ridge. Sixteen days and nearly 15,000 casualties later, they had obtained their objective. The motives for the quixotic attack lay in Anglo-French rivalry and the quarrels of British and French commanders; and Mr. Henry Borden, a youth at the time, recalls hearing his uncle, Sir Robert Borden, indignantly tell the British War Cabinet that unless this senseless destruction of brave men for non-military reasons were to cease, Canada would supply no more troops.

In the spring of 1918, with Russia out of the war, the Germans hurled a desperate offensive against the West. They won tremendous successes but not ultimate victory. The Allies at long last achieved unity of command and the new generalissimo, Marshal Foch, began on July 18th a sweeping counter-offensive that did not halt until the capitulation of the Germans on November 11th. At every stage of this great advance, the Canadians (as Lloyd George had foretold) were used as shock troops for the break-through, but the cost is dead and wounded was appalling. In the three great battles of Amiens, Arras and Cambrai, the Canadian casualty list reached the staggering total of 37,263. In the last few weeks of the war, lesser actions were fought at Denain, Valenciennes and Mons.