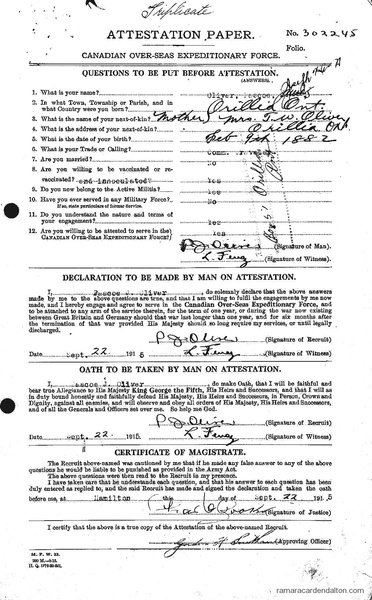 The following is taken from a letter written by Private J. A. Corvie, France, to Private R. G. Black, who went overseas with the 177th Battalion:–

It is with the very deepest regret I write to give you what details I can regarding the death of your brother, T. H. Black. He was killed in action on Sunday morning, August 19th. His personal belongings were turned into headquarters, excepting his ring, which at the time of his burial, was taken off by one of the boys and given to me to forward to you. I am sorry. I cannot state the place of his burial at present, but will be able to do so later. He was buried with Thos. Carrick of Washago and a man named Kilmore. Captain Scott, 1st Division Chaplain, read the burial service over the grave. He was given the very best burial conditions would permit.

The letter was forwarded to his sister, Mrs. Frank Anderson, Atherley, and in writing, Private R. G. Black says:

If they could see some of the boys who come over here to hospitals, it would make some of those fellows at home open their eyes. But I am not sorry I came. Not saying I wouldn’t like to be home again. But as long as the war lasts I am on the job. We fare pretty well, but don’t think we waste anything.