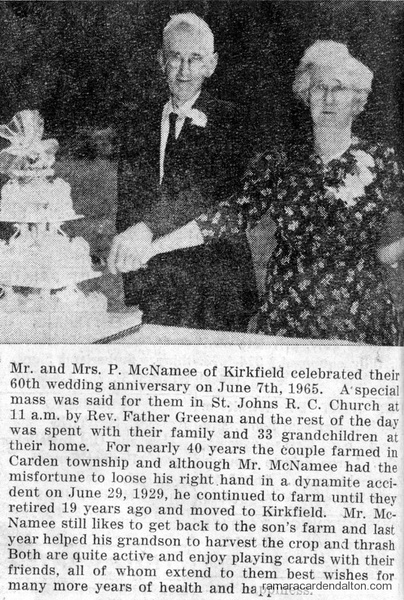 
In a letter appearing on Page 256, Vol. 28, of “Documentary History of Education in Upper Canada (Ontario) “William Heavener, a man of education and former teacher, states:

“I came from Dublin to Toronto in the year 1853, and called at the Normal School, opened in 1847, to see Doctor Ryerson, who examined me and sent me forthwith to Mr. Thomas Nixon of Newmarket, who was then Local Superintendent of Schools for the Counties of Ontario and York.”
Written at Longford Mills, April 16th, 1896

The following is a report written by James McBrien, Inspector, dated February 26th, 1877, on the condition of schools in Ontario Co. This letter appears on P. 134, Vol. II, of Schools and Colleges of Ontario.

Apple School Accommodation.–A revolution has been gradually and voluntarily effected in this matter. Old things have passed away and all things have become new. Eleven out of fourteen Municipalities have risen up to the high and intelligent standard of the law. The new School-houses erected are, indeed, the people’s colleges, and monuments to their intelligence and liberality.

Teachers.–There are 145 certified teachers; seven First and thirty-eight Second Class Provincial, twelve Old County Board, eighty-five Third Class New County Board–that is to say, about two-thirds of the Teachers are Third Class. The machinery of our Educational System possesses a very high degree of perfection, but we stand in sore need of trained, experienced and skilful men “to run the machine,” so as to accomplish the grand object for which the system was founded. Without training, experience, or adaptation, many embark in the profession, and having neither compass nor rudder to guide them, they steer for no particular harbour; or, in other words, they have no rational end in view, and use no means to attain such an end.

This leakage can only be stopped by paying Teachers an adequate price for their time, talents and experience. I am more than glad the Honourable Minister of Education is about to remedy this evil by establishing Teachers ’Institutes.

Salaries.–The average salaries paid to male Teachers was only $407. Anyone can see at a glance that this amount is inadequate to support a man with a family, and, therefore, men of talent are continually quitting the profession.
February 26th, 1877
James McBrien, Inspector, Ontario.