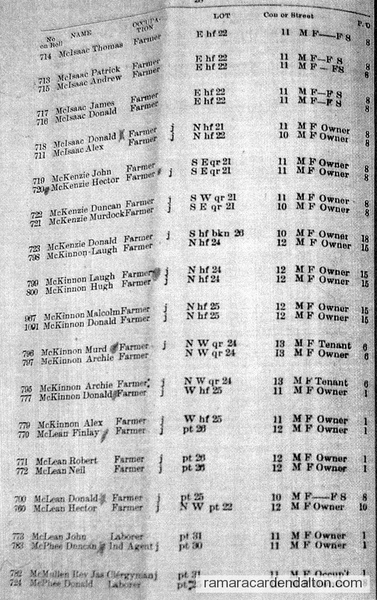 Following so soon after his recent visit to the town, the news of Father Campbell’s death, which reached here Saturday afternoon fell like a thunder clap out of a clear sky. It seemed but a few days ago that he was up and down the street renewing old acquaintanceships, and before his hearty handshake and genial smile are forgotten, the sudden news arrives, “he is dead.”

From his visit to Orillia, last fall, Father Campbell went to Scranton, Pa., thinking the climate would do him good, but not withstanding every care he gradually grew worse and death came suddenly at the last. His remains were brought to his beloved Orillia for interment and were laid to rest beneath the shadow of the church that he had devoted his life to building and guarding, and which shall stand for ages as a monument of the life work of a devoted and loyal son of the church.

Coming to Orillia from Uptergrove, when the village the village was in its infancy, the Rev. Kenneth A. Campbell, then a young man, soon drew around him a large and increasing congregation. For some time they worshipped in the old log church which stood in the grounds of the Catholic cemetery on the Coldwater Road, but it was not long before the building was far too small, and it was decided to build a new church. The beautiful grounds where the present magnificent church stands, was then a bush lot, and a very rough one at that, but Father Campbell decided to build there, and the work was begun. The wisdom of his choice of locality was never more apparent than when the sun shone on the large concourse of sorrowing people who surrounded the open grave of their beloved pastor and teacher on Tuesday morning. For years Father Campbell struggled to make the church of the Angels Guardian the foremost in the diocese, and it was no doubt owing in a great measure to the toils and hardships of his early struggle that his health broke down, while he was yet in his prime. Compelled at last by illness to relinquish his labour for his beloved Zion, Father Campbell laid aside his office and went south in search of health. But it was not to be, his constitution had been thoroughly undermined, and in spite of everything the end came, and another devoted and heroic life was merged in the great unknown.

On the arrival of the 3:15 train Monday, the remains were escorted to the church by the members of the C.M.B.A., of Orillia, Uptergrove and Brechin, and followed by a large concourse of citizens. The church had been speedily draped in mourning and the remains lay in state in the chancel all Monday night and Tuesday morning and were viewed by hundreds of his friends, both Protestant and Catholic.

The funeral obsequies were grand and solemnly imposing, and were presided over by His Grace, the Most Reverend Archbishop of Toronto, John Walsh, D.D. The solemn Requiem High Pontifical Mass was celebrated by the Very Reverend Vicar General McCann, of Toronto, assisted by Father Laboreau, deacon, and Father Kilcullen, sub-deacon. The singing of the Mass, which was Gregorian chant, was under the direction of Rev. Father Murray, of St. Michael’s College, Toronto, assisted by choristers from the college, Rev. Father Rohleder, of St. Michael’s, presiding at the organ. After the mass had been celebrated, His Grace, the Archbishop, spoke a few words to the large concourse of sorrowing people who crowded the church to the doors. He said it was not customary in the Catholic church to preach sermons at funerals, but this was an occasion that called for a few remarks. He paid a glowing tribute to the character and life of the deceased, and said it was truly the merging of a grand and heroic life into the bliss of an eternal rest. When we consign our friends body to the tomb that is not the last of him. The grave is but the furrow in which the seed of immortality must be cast, to burst forth at the coming of the Son of God in the bright effulgence of his presence. It is sown a corrupt body, it is raised incorruptible.

Wrapped in the winding sheet of death we are laid in the silent grave, but one day we shall rise, if we sin not, in the glory of His presence.

The body was carried to the tomb by the officiating priests, the Rev. Fathers Morris, Cullen, Moyna, Kilcullen, Duffy, and McGuire, acting as pall bearers. The funeral was an event in history of the Roman Catholic Church in Orillia. Never before have so many dignitaries of the church have gathered within its walls, and it is only the second time since the erection of the church that it has been visited by His Grace, the Archbishop of the Diocese. The visiting clergy present were His Grace, Archbishop Walsh, D.D.; The Very Rev. Father McCann, Toronto;