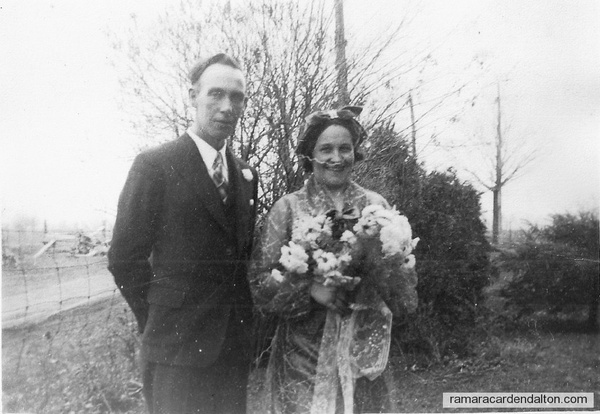 We stop the press to announce the murder of a man well known in Orillia, named Healy who was shot through the head in Tivnon’s Hotel, Atherley last Wednesday night. As is usual in times of more than ordinary excitement, it is almost impossible to get to the truth. There are numberless versions of the affair, but we prefer not giving any of them until an investigation shall have disclosed the true one. It is certain however, that the unfortunate man Healy was shot through the head with a revolver by a sub-contractor on the T.S. & M.J. R.R. named Gunn.

The ball entered at the left temple and passed out at the crown of the head. Only a week or ten days ago the murdered man was married to a daughter of Mr. Coleman, Bass Lake. Gunn has not yet been arrested.

The above particulars were received after the paper was on the press, last week and consequently appeared in only half the edition. An inquest was held at Tivnon’s Hotel on Thursday by Coroner Foley, at which the following particulars were adduced:

The deceased had been in the house only a few minutes when a quarrel arose between Gunn and one Moran. Healy interposed to make peace, but his interference was resented by Gunn, who struck him in the face. Healy returned the blow, whereupon Gunn drew a pistol and after striking him once with it placed the weapon against his left temple and fired. The murderer walked about the room for a few minutes and then went up stairs and brought down a loaded revolver, which he showed to some of the inmates of the house, to prove by its being loaded and clean that it was not he who had shot the man. He shortly after returned to his room upstairs, changed his clothes and started off, the spectators apparently being so completely paralyzed as to offer no resistance.

The jury returned a verdict of wilful murder against Gunn and strongly censured the government for their laxity in having no magistrates appointed to the Township of Mara, in consequence of which no immediate action was taken for the murderers arrest.

A description of Gunn has been advertised in the “Globe” and hand bills offering a reward of $400, – $300 from the Township Councils of Mara and Rama and $100 from the brothers of the murdered man, have been issued.

Gunn is a stone mason by trade and resides at St. Mary’s when at home, where he has a wife and family. The following is the description given of him: Rather stoutly built, height about six feet, pocked marked, heavy beard and mustache of sandy colour, aged about 35 years, grey eyes, speaks with a slight Scottish accent.

On Wednesday evening, the 17th, a most cold-blooded and extraordinary murder was perpetrated at Atherley in the Township of Mara, county of Ontario, and about four miles from Orillia. The particulars as given in the evidence at the inquest held by Coroner Foley are substantially as follows:

On the day named, Gunn had completed a contract on the Northern Extension Railway and the men were celebrating the event at Tivnon’s Tavern in the manner usual to such occasions. About nine o’clock in the evening, a quarrel occurred between Gunn and one of his labourers named Morin. Gunn had his antagonist and was beating him when John Healy, returning home from Orillia, entered the bar-room and immediately interfered, pushing Gunn off from Morin. A struggle ensued between them in which it is said Gunn had the advantage, being the larger and more powerful of the two and Healy also being encumbered with three coats buttoned to the chin. Suddenly however, Gunn drew a revolver and holding Healy at arm’s length – it is asserted by some who witnessed the deed – first struck the unfortunate man on the temple with it, then took deliberate aim and shot him through the temple with it, instantly killing him. Letting his victim fall, the murderer walked across the room several times, apparently deliberating upon what course to pursue, then went upstairs – coolly stepping over Healy’s body – washed his hands, arranged some of his affairs, took an old fashioned revolver, which on returning below stairs he gave it to Mrs. Tivnon, intimating that he could not have shot the man as his revolver was useless. It was sworn however, that the weapon used was of modern pattern. Gunn was allowed to depart. Those present being apparently panic stricken by a report that he had threatened to shoot Morin before leaving Atherley. He was accompanied for some distance by one of his labourers named Kilroy, to whom he gave his time book. No further clue to the course taken by the murderer has been obtained. His deliberate actions subsequent to the murder do not seem to indicate that he was intoxicated when he committed the deed.

The Coroner’s Jury rendered a verdict of “Wilful Murder” against Gunn. They also censured the government for having no magistrate in the township.

A reward of four hundred dollars is offered for the apprehension of Gunn. He is about six feet, pock-marked, heavy beard and mustache of sandy colour, aged about 35 years, grey eyes and speaks with a slight Scottish accent. Had on when left Atherley a dark coat, light coloured pants and vest, with dark fur cap or black rowdy hat.