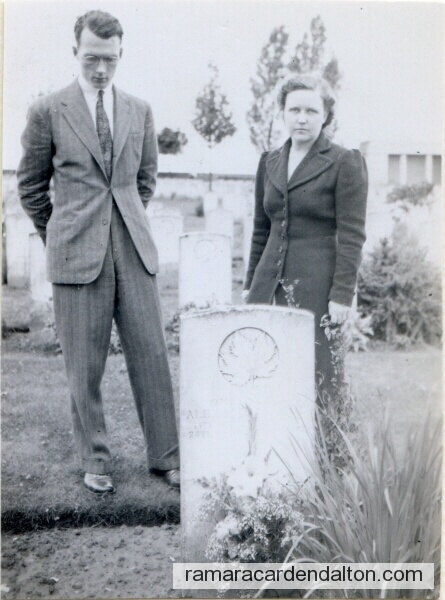 To-day, as we give thanks to God, for the many blessings the parish of St. Andrew has received, we should reflect back to the early settlers, who made all this possible, and remember them in our prayers.

Our courageous forefathers, for the most part suffered greatly on the fever-ridden ships on which they sailed. Some lost more family members in the quarantines of Quebec, but they trekked on to their ultimate destinations. Those who were to receive land grants in Mara Township were no exception.

Undaunted, they began the awesome task of clearing the dense forest which covered this land. They had only primitive tools at their disposal, and the help of other settlers to clear their land and build even a rude cabin for shelter.

The only thing they all seemed to possess was their faith in God, their hope for the future and most of all, their charity towards one another.

For more than forty years before a parish was established, the spiritual needs of the Catholic settlers was administered by F. Jean Proulx from the Oshawa/Whitby area. This hardworking priest travelled by horseback and sometimes on foot to the many “stations” committed to his care in Ontario County. These “stations” were usually the homes of the people or perhaps a schoolhouse where one was available.

When he arrived in a district he would celebrate Mass, hear confessions, perform baptisms and marriages, and administer the last rites to the sick and infirm. Unfortunately, his visits were infrequent due to the size of the territory in his charge. Hence the people had to rely on their own prayers and bible readings, if one was available, between his visits.

In 1855 the parish of Brock was established and Fr. John Walsh, who later became Archbishop of Toronto was made pastor and served this area. Soon after in the same year the parish of Mara was brought into being at Uptergrove. Fr. John Synott was the first priest to serve all of Mara Township and Orillia district. He built a frame church on the site of the present cemetery vault. At this time the bodies of the early pioneers who had been buried on their farms were moved to the Uptergrove Cemetery.

In 1857 Fr. Joseph Michel took charge for the next eight years and in 1865 Fr. Kenneth Campbell was made pastor. Soon it was decided due to the increasing population in the Brechin area, to build a mission church.

In the early 1860’s Mr. James P. Foley moved to the area with his Scottish wife who hailed from Brechin, Scotland; and Brechin, Ontario was so named in her honour.

Mr. Foley owned a farm in the northeast part of Brechin and donated a piece of land from this farm to accommodate the Church and original part of the cemetery. In September 1868 the cornerstone was laid and in January 6, 1869 the Church was officially opened. Fr. Kenneth Campbell chose St. Andrew as its patron.

It is interesting to note that both the Church and Village were given Scottish names, in a predominately Irish settlement, a testament of the goodwill between Scottish and Irish people in Mara Township.

In 1874 Fr. Campbell was moved to Orillia and Fr. Philibert Rey took charge of Uptergrove and Brechin until the arrival of Fr. Davis in 1884.

Immediately after the arrival of Fr. Michael Davis on March 19th, 1884, he began work on the new rectory. It was built by the parishioners.

Shortly after its completion, another half a crew was donated by Mr. Foley to build a one room school. By 1886, the school was too small to accommodate the number of children in the district. By this time, Mr. Colin MacDonald had purchased the farm from Mr. Foley and he donated the property for the enlarged school and yard surrounding it, and extra space for the cemetery.

Once the parish of St. Andrew was officially formed, the struggle for survival went on. Furnishings for the Church and rectory were needed and the parishioners were by on means affluent, but step-by-step began to form the basis for the parish we have today.

In 1887 Fr. Davis was transferred and Fr. Patrick McMahon took his place, but before he left, Fr. Davis wrote this poem which expressed his thoughts when leaving Brechin. Here is part of his poem:

November sun was in the horizon low,
And I, in my study, sat in the after-glow,
When first I learned, to my sorrowing heart,
From my dear friends in Brechin, I would have to part.

I strove to do well, for my friends so dear,
And serve my God who sent me here,
To do his holy work, and bear the cross,
And endure this parting, although quite a loss.

Farewell, farewell, ye my darling friends,
Who always helped me to make amends,
For things I could not do without help, from you,
May Heaven Bless you, my friends, “Amen”.

All this my labour, day by day,
Until I from earth shall pass away,
To he crowned by my Mother, I trust to be
And that you my dear friends, may be crowned with me.

In 1887 Fr. Michael Davis left Brechin after the parish was well established, having built a rectory and a school.

Fr. Patrick McMahon followed and for the next six years carried on having a difficult time financially; however, for years the parishioners supplied the Priests with wood, vegetables, meat etc. and he and the others were able to survive.

In 1893 Fr. Kenneth McRae arrived in Brechin and this beloved man remained for seventeen years. In the summer months he was often seen calling on his parishioners on his bicycle. He accomplished many things in his tenure, chiefly the establishment of the League of the Sacred Heart.

In 1911 Fr. Thomas Redmond took his place and immediately discovered the vestments, candlesticks and linens and outlived their usefulness and undertook replacing these necessary items.

Fr. James Hayes was appointed to Brechin in 1913. He had the parish hall and sheds erected and many repairs to the Church.

In 1920 Fr. Kenneth Morrow came with his ready wit and began plants to build the present Church. He travelled one summer to Europe to study the architecture of some famous Churches there. When he returned the old Church was levelled, and on June 14, 1925 the cornerstone was laid for the new Church. So much has been said about the building process, there is no need for repetition, however, our Church is considered one of the finest in the Archdiocese for a parish of its size. Although the debt was with us for many years, Fr. Morrow’s promotional efforts were outstanding. He left reluctantly in 1936. However, when he died December 5, 1948, his remains were buried in front of his beloved St. Andrew’s Church.

Fr. Simon Armstrong came to Brechin in 1936, a very quiet and devout priest. He set up Christian Doctrine classes in each area for adults, they were held in the peoples homes, but during the war it seemed to disappear. On February 6th, 1940, we received the shocking news of his death and his funeral was held from this church.

Fr. Ambrose Conway succeeded him in 1940 and due to the influx of people to the city at that time as the war progressed, he had to work hard to keep the debt paid. He also re-established The League of the Sacred Heart.

1945 saw the end of the war and Fr. Wilfrid Gavard, an R.C.A.F. Chaplain came. He was very popular but only remained a few months to minister to the people.

Fr. Basil Sullivan was appointed pastor in 1946, he soon began plans to form St. Andrew’s Credit Union, a great benefit for the parishioners. He also made improvements in the rectory and hall and re-established the C.W.L.

Fr. John Thompson arrived in 1955, and during his time the mortgage was burned. He also renovated the hall and rectory. Unfortunately due to ill health he was forced to leave in 1959.

Fr. Louis Dignard came in 1959 to minister to Brechin parishioners and while here put in a new carpet and electric organ, quite an improvement from the old one.

He was followed by Fr. Oliver Moloney in 1961, a very hardworking priest who started the Confraternity of Christian Doctrine and had the floors re-finished and the woodwork cleaned.

In 1963 Fr. Francis Sullivan carried on this work with the Confraternity of Christian Doctrine and had sessions at the old school. He also had a new roof put on the Church and two furnaces installed in the hall.

In 1965 Rev. James Leahy, a kindly man with the children and teenagers, began Catechism classes for the high school children and formed a very good girls choir and put on many fine concerts.

Fr. Raymond Morrison was appointed in 1969, and was particularly concerned with the sick and elderly. His own health failing, he remained only two years.

In 1971 Fr. James J. Hayes, nephew of the former Fr. Hayes, came and accomplished many things, among them being renovations to the hall, bringing the kitchen and washrooms up to fire and health standards. He also had many improvements made to the rectory and grounds in his twelve years here.

Fr. Joseph O’Neill came in 1983 and already has put in a new floor in the upstairs hall, refinished the pews and renewed the chapel. Work is continuing on the church and rectory.

In all, we have been blessed with eighteen good priests in the past one hundred years. These spiritual leaders with the co-operation of St. Andrew’s parishioners have attained a goal of which we are certain our forefathers would be very proud.

St. Andrews parish has given many of its sons and daughters to the religious life. The Roach brothers, who were ordained together July 1st, 1901 appeared to be the inspiration for many boys choosing the priesthood including Father Edmund McCorkell who later became Superior General of the Basilian Order. These priests are as follows:

Rev. Gerard French is the only surviving priest and recently celebrated his golden jubilee.

Sisters from the Parish:

As the Altar boys in the past one hundred years are too numerous to mention, we will give them all our thanks for their faithful services around the Altar and a job well done.

Our thanks to the ladies of the Altar Society who faithfully cleaned and decorated the sanctuary every week; to these we hope God will always bless them.

We are grateful to the boys of the parish who sacrificed themselves in World War 1 and II for us to live in freedom. Thanks seems futile, especially to those who lost their lives, namely Lt. Ignatius McCorkell and Pte. Dennis McCarthy. May they rest in peace.

to other parts of the country and their children have succeeded well.