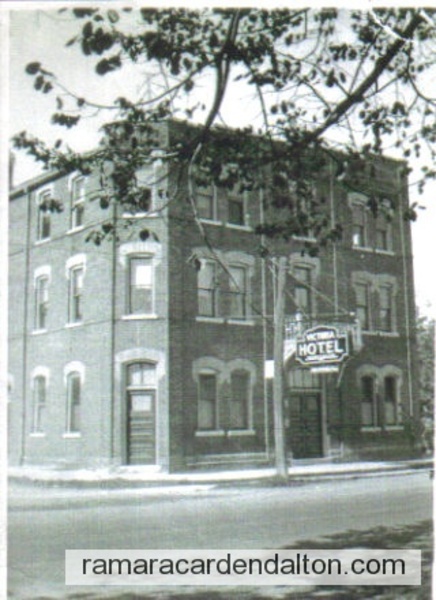 This research by Frances (Fox) Laver

FIRES OF 1881
.
In articles in the Canadian Post Lindsay, September 1881, it tells of the many fires that were in the area. It must have been a very dry summer. There is mention of fires near Lindsay, Coboconk, Lindsay, Innismore and Emily, even Toronto and Michigan, These articles pertain to the Carden area.

HEAD LAKE September 2, 1881
Bush Fire – A very large bush fire has been raging west of Uphill. The smoke keeps the sun clouded all day and renders the air very oppressive. Rain is much needed here now to quench the fires. The water in the lake is lower than ever known to be.
HEAD LAKE September 16, 1881
The last week has been a time of great excitement around this place on account of the extensive bush fires that are raging about for miles around. Vast forests and beaver meadows have been swept away before the fire and wherever a house or a barn occurred they were burnt up also, and the people have had to flee to rivers and lakes for safety and the smoke is so intense that it almost suffocates a person. Every person is engaged in drawing water to quench the fire and even when there is no fire at all they are throwing water to keep the fire from spreading. The following are the names of persons burned out of the south end of the lake. Mr. Mummerson, all his buildings with grain; Mrs. Carr, all her outbuildings with all her grain and a number of sheep and most of the contents of the house, as they were moved out in the fields for safety; Mrs. Bailey, home and barn and contents; Mr. Cooper, a stable full of hay; Mr. Richard Gastlin, who was trying to save the furniture in his mother’s house, remained too long in the flames and fell down insensible. . He was brought to consciousness again with some difficulty. The fire still rages around here and if we are not visited by rain, no person expects to escape its ravages.
THE FIRE IN DALTON. MARA AND RAMA
A letter dated from Sebright, September 12, 1881 says. The bush fires have been raging for the last month in this vicinity, but until lately have done little damage beyond the destruction of timber. About two weeks ago however, they began to assume a serious aspect, and some hard fighting was done to save the mill belonging to Mr. M. Revel, and the building of W. Barnes and A Reid. These were several times on fire but the strenuous efforts of the neighbours succeeded in quenching the flames. A few days later the fire appeared behind the building of Mr. C. Taylor and he and Mr. W. Campbell were endeavouring to prevent it running across the fields, a tree fell on the later, striking him between the shoulders and knocking him senseless to the ground. The parties who were watching the barn at once rushed to his assistance and carried him to the house. They had no sooner done so than the barn caught fire and burnt to the ground. W. Campbell lies in a precarious condition and little hope is give to his recovery. He subsequently died.
These catastrophes were small, however compared to those of Wednesday. Altogether a day which will long be remembered by a great many of the settlers of Rama and Dalton. A strong gale sprung up in the morning and continued with unabated fury during the day. In the forenoon there was little perceptible increase in the fires, but soon after noon a dense smoke was observable towards the northwest, which continued to increase until the very light of the sun was darkened and the surrounding objects assumed a yellowish hue. At a distance of two miles the roaring flames and the crashing of fallen timber could be distinctly heard. In an almost incredibly short space of time the fire reached here. Its appearance as it swept through the swamp to the north of the clearing was something terrific and altogether beyond description. Sheets of flame waved above the trees licking the tops of the tallest pines. The roads formed no barrier; tongues of flame reached across them and fired the trees on the opposite side. The settlement to the north was completely shut off , in fact each individual settler was imprisoned in his clearing, shut off from escape or help, had there been any one who could have left his own place to render such. Mr. Peter Barnes fought hard but unsuccessfully to save his buildings but besides having to contend with blinding smoke , he had little water. House, barn, fences, his cattle, sheep and pigs were burnt. It was only by sprinkling themselves with water when they caught fire that they saved their own lives. They lay in a field all night, scarcely able to breathe and blinded by the smoke. The horses saved their lives by closely following their master and lying down beside him all night.
Mr. J.D. Gray’s was almost a parallel case. His family lost everything except the clothes they wore. Rumours reached here during the evening of the burning of a Mrs. McDonald and her son. As their clearing was completely shut off by the fire, the authenticity of these reports could not be ascertained and much anxiety was consequently felt.

VICTORIA ROAD – NORTH VICTORIA Canadian Post September 1881\Perhaps the most disastrous bush fires that have visited this north country for the past fifty years are now raging in every direction. The long continued drought has dried everything until every tuft of grass or pieces of wood is as combustible as a tinder box. And is always the case, fires break out in different localities and instead of them being at once put out are allowed to run over a fallow until they become unmanageable, resulting in the whole country——–unreadable——–
A very great deal of valuable timber belonging to the farmers and posts, poles and wood belonging to the railway company have been destroyed. A great number of farmers and mill hands have been burnt out and it is feared that not a building will escape in the whole district. Among those lately burned i might mention Mr. Dixon, who lost his house, barn and the greater part of its contents, while not a vestage of the house contents were saved. His loss will be heavy. Mr. Mumbeton(?), barn and contents, MR> Harrington, barn and contents, Mr. Gortelis (?), barn and all the contents and the widow Bailey’s farm buildings were destroyed. The evening train due here at four o’clock on the Nipissing railway got as far as Corson’s toward Coboconk, but at that place Corson’s large mill was in flames and also the whole of the lumber and wood at the siding. The driver pushed on with the hope of passing the mill, but the heat was so intense, the rails were twisted. It is almost sure that three cars which stand loaded at Corson’s will be destroyed. About all the mill hands who have houses near the mill have been burned out and already the home of Mr. Teskey and Mr. Richmond have been destroyed. The men, women and children have fought hard and long for their homes but inch by inch the fire has gained upon them and a great number have had to witness their homes fall prey to the flames and then flee to save their lives. A man who lived in Canada for fifty years says that he has never witnessed such wide spread desolation before. This evening the fires are raging as fiercely as ever and in every direction the air bears the reflection of the fire. In most cases the farmers were insured but generally speaking, an insurance of a few hundred dollars goes but a little ways towards replacing the toil and the labour of a life time.
Tuesday Evening The fires have been raging with unabated fury since noon and more settlers have been burned out and as the reports are continually coming in it is impossible to ascertain the exact number who have suffered by the fire but the following list will be found complete uo to Tuesday evening. Corson’s mill and a great quantity of lumber; Frank Corson’s house which was used as a large boarding house; E. Scriber, labourer; William Tesky, labourer; M. Moffatt labourer; George Richmond, Robert Brandon, house and barn; Joe Dixon, house, barn and about all of their contents. Dixon’s loss will be very heavy. The four large barns and stables of Corson’s were all burned; Mr. Kivel’s house and contents; and two coal and one lumber car. These buildings were all within a radius of two miles. A very heavy rain is the only thing that can possibly stop the fires and unless it comes soon every settler between here and Coboconk will be burned out..