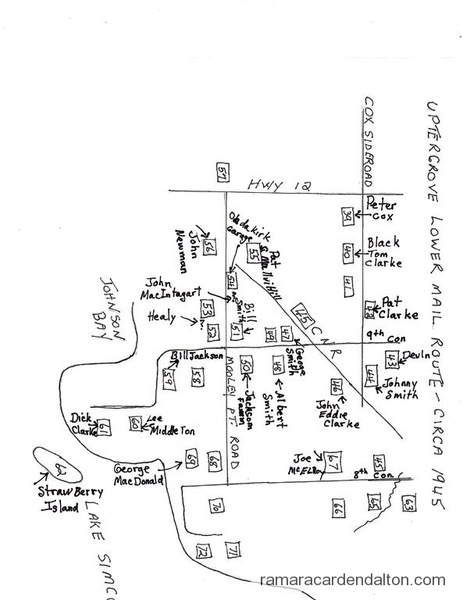 Thoughts on the 11th of Nov.
of G. H Stewart
Cameron Highlander, Ottawa

WE left Southamton England on the evening of June the 5th 1944. Sailed all night and at daylight we were off the coast of France at Beny Sur Mer, my platoon was on a L. C. M,( Landing Craft Mechanized). They were about 50’ ft long and we could get 4 machine gun carriers on each side. The front of the craft was a large door, which acted as a ram, was water tight when closed. They were flat bottomed like a scow and you felt as if you were sailing in a wash tub. My carrier was the last one in and you had very little room to manoeuvre to get it placed so they could winch the door up with cables.
We mad a couple of circles around waiting for our turn to head for the beach. Out behind us was a large battleship (The Sharspita) firing her 16 inch guns The shells sounded like a freight train going through the air. The enemy were throwing a few shells back and we could see them exploding in the water. This is when the feelings come over you. What’s it going to be like? Will I be able to do my job? How are your buddies going to react.
Some of the Landing Craft hit mines, some were hit by shells, some hit sand bars and unload in deep water. Our craft put us right on the beach. They landed behind the Queen’s Own Rifles, and it was another feeling came over you when you first seen the Canadians that had been killed.
We didn’t have to much trouble the first day as we were the reserve brigade (9th) but on the 7th of June our forward troops met Kurt Myers Armoured Division. We dug in at a little village called Les Buisson and for the next few days endured the most shelling and several attacks on our positions that I think was the worst I seen in the next eleven months.
My company commander and my platoon commander were killed, my platoon Sgt’s nerves went on him. We had four guns Cpl.’s and three of them were wounded. We had four Vickers water cooled machine guns and they were all put out of commission from the shell fire.
This is where we found out what all the training we done in England & Scotland was all about. There were green troops but with all the training we had you done things, your job, automatically, no matter how scared you were.
On the night of the 10th of June we were ordered back to a rest area and were re-organized with a new platoon commander, new guns, and a lot of new reinforcements.
When I stand in front of a cenotaph on the 11th of Nov. I remembered a lot of these events and also those that happened afterwards through France, Belgium, Holland and Germany. Sgt. Smithers from Vernon, B.C, and 3 Pvts., were the only ones in our platoon who landed on “D” Day and never missed any action our platoon was in. Some were wounded once and came back. One was wounded twice and we never saw him again. I can still remember the cold sweat running down my back when things were tough even on the hottest days in France. Don’t ever think there isn’t tears shed even by the toughest of men when you have one of your own buds hit and you try to think they are not going to get me.
Chuck Smithers & I went back overseas in 1988 with a group of Cameron Highlanders & visited the Canadian War Cemeteries at Beny Sur Mer, Grosbeak and others. We took a Legion wreath and laid it on Lorne Price’s grave at Grosbeak, who we thought was the best platoon Sgt. in the Canadian Army. It’s a very moving experience to visit the graves of men who were like brothers to you.
We had a lot of pride in our Division (3rd Canadian, Our Battalion) (Cameron Highlanders of Ottawa) our Company (C”Co.) our platoon (10 platoon). If you didn’t you weren’t much of a soldier.
On the 11th of Nov., I will stand in front of the Cenotaph and pray that you or any other young Canadian never has to go through a was again. I will think of all the men I knew who are still over there from World War II and three of my cousins from World War I, who lost their lives at Vimy and no doubt I will again shed a few tears.