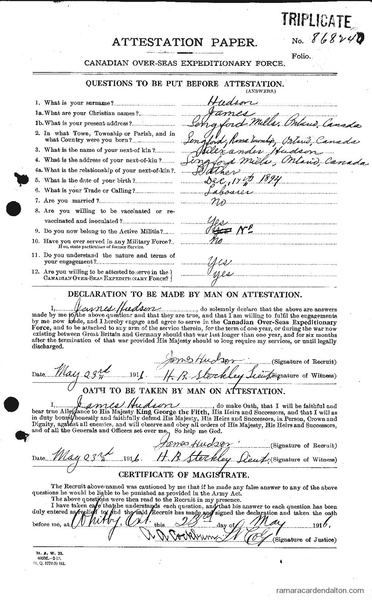 As Captain John D. Glover, Adjutant of the 4th Battalion, 1st Infantry Brigade, prepared to cross the Atlantic, as part of the 1st Contingent- he took a few moments to write the following letter to his parents.

Both Captain Glover and his brother Sergt. Norman Glover, were killed in action, in April 1915. (see Those who made the Supreme Sacrifice)

“Just a line or two this morning, to let you know how we are getting along. I wrote you from Rimouski, but I don’t suppose you will have received it yet. We have been lying in Gaspe harbour since last Sunday, but are going out to sea at ten o’clock this morning. I don’t think there ever before was such a sight in Canada as there is this morning in this harbour. It is a fine harbour, and was selected because of its isolated position. I suppose that none except the fisher folk who live along the banks know we are here. There are four armoured cruisers of the British navy and thirty two ocean liners lying in the harbour, formed up in three long lines, alongside one another. Right alongside of us on one side is the LAPLAND, said to be the largest boat that ever came to Canadian waters, and on our left we have the ROYAL GEORGE, another large liner of the C.N.R. line. It is indeed a great sight to look out and see the huge ships, with smoke rising from their funnels, as they steam up ready to pull out. We don’t know where we are to go but we think it will be England first for a few weeks, and then to the point. Everything is kept very secret here. Not a soul has been allowed ashore at all, nor has any mail or signal been sent ashore. I don’t know what ship Norman is on, as he did not leave Quebec at the same time as I did, but no doubt he is aboard one of the ships.
I am, as usual, kept pretty busy, but it is a little easier on board ship than ashore. We are down to a working basis now, and there is nothing other than usual routine to look after. It may be a long time before you get this letter as I think they will not let any mail out of this harbour until we are pretty close to the Old Country. All mail leaving Valcartier was opened, to see that nothing concerning the movement of the troops was mentioned. I don’t know whether this will get out this morning or not, but am writing it on the strength of a rumour that a mail bag would be taken from each ship.”