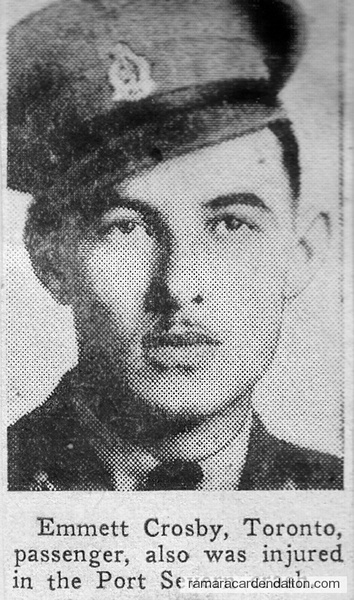 We are now nearing the end of what is to me the central part of the McCorkell saga, with the names and plays of all the players (so to speak) in my father’s family. We have considered all but two of them, Rosella and myself. (I leave out of consideration John for the moment). I have left these two to the end because I am following the order in which the members of our family left home to make their own separate careers, and in a very real sense neither Rosella nor I ever left home. As to myself a priest does not really leave home. The Church provides for him, but he has no home of his very own. The closest to it is the home in which he was born, and that is close indeed. After the death of his parents his home continues in the memories and affection of those who grew up together. But more of that later. Now as to Rosella. She was the second among three girls, who started the procession in our family, followed by six boys, and finally a fourth girl. The distribution was clearly such that the older girls were approaching maturity when the boys were entering the boisterous teen-age period. Sarah, Rosella and May, were therefore of great assistance to my Mother to help my father in the fields. I believe she used to ride the binder. When however Sarah and May were married in 1900, Rosella was elected by the logic of events to become the old reliable. Prospects of marriage for her had to be postponed.

I have the most invincible faith that Divine Providence guided our family at every stage in its ups and downs, it successes and its failures, but humanly speaking it was Rosella, who in the comings and goings of the others kept the home fires burning. She held the family together in spirit. Mother was a chronic invalid for many years. Most of us were too young to appreciate what a trial for my father her repeated illnesses really were. It is true even as an invalid her influence in the background was a steadying one on the family, but granting all that it is nevertheless true that her inactivity (she was six years in bed) left my father a rather lonely man. It was Rosella’s unfailing devotion that, so to speak, filled the vacuum. Upon her devolved the task of keeping in touch with those of us who were away at school, and of giving us a warm welcome, in which Dad always joined, when we came back to a clean, tidy and attractive home at Christmas or on the holidays.

My Mother’s health fortunately improved around 1910. A really good doctor (Galloway of Beaverton) appeared on the scene and got results. This more or less complete recovery continued. In the meantime Philomena had grown up, had made several attempts to renew her schooling, interrupted by illnesses, and had returned home to stay. Rosella then felt free to marry. Her husband was Edward Gettings, an Uptergrove farmer, and a widower without children. This was in July 1913. Sad to say he died suddenly of pneumonia less than three years later, leaving Rosella with two small children, Philomena and Edward. Rosella had no other choice than to lease her husband’s farm to a tenant, Matt Gonter, and return with her two children to the old home with her parents. She could take care of her own children there, and at the same time look after her father and mother as well as John, her brother, who had always lived at home as a ward of the family.

Mother died on February 28, 1928, and my father on March 26, 1933. He had always been more robust than my Mother, but failed rapidly during his last year. At 79 years of age he finished his earthly career. On the whole he had been a silent man, unlike his own brother John who was interested in politics, and had been Reeve of Mara once. My father, it must be admitted, was a kind of maverick in politics. The family tradition had been loyalty to Laurier, the Liberal Prime Minister in the first decade of the twentieth century, doubtless by reason of religion. My father appears to have broken with this tradition and become a staunch Conservative. The Orangement of our country village, 6 miles north of Brechin and exactly 2 miles from our farm were very partial to Dad; even when they came to know that one of his sons was studying for the priesthood. Of course they also knew that another one of his sons had given his life for his country, and that made a difference with them. It counted for much, in fact. But forty years later I discovered another reason for their partiality. It grew out of an event which I saw with my own eyes. The barn of one of our neighbours was struck by lightning and burned to the ground in early summer with almost all the year’s crop in it. It was a total loss, and there was no insurance. Christian charity was, however, not dead in that area. The man whose barn was burned was Protestant and an Orangeman. His friends and neighbours at once set out to make up the loss by a public subscription. It was considered good policy to approach the nearest neighbour first. That was my father. That is what they did, and even they were surprised when my father gave one hundred dollars, a large sum for that time. Fortified by this pace-setting donation they were able to extract the same sum from nearly every Orangeman in the area. It was more than forty years later that I found out what my father had done. Nor did any of our family know. Surely the Scripture was fulfilled: “Let not your right hand know what your left hand does.” (Matt.II-3)

When my father died in 1933 Rosella returned to the Gettings farm at Uptergrove with her two children. She took also with her John, her own brother, and looked after him until some years later a place was found for him in the House of Providence. This was a very great relief for Rosella, since he was becoming increasingly difficult to control. In earlier years as we grew up on the McCorkell farm, John was a reasonably good worker. He was slow at school, and in fact made no progress, but he was useful and co-operative. I remember one summer, barley, and even the hay (a heavier job) with Ignatius as man who built the load on the wagon and drove the team. If Dad could have kept the three of us at that work every summer he would not need to hire anybody. But only John remained attached to the farm. As years went on he became less reliable. He rambled all over the farm. As years went on he became less reliable. He rambled all over the area, and his health deteriorated. Rosella has earned a lot of marks for her charity to him. Eventually the old age pension was sufficient to take him off her hands. He died in Providence V illa, Toronto, on March 21, 1968. I often wonder if the entire family and indeed every member of it has not gained spiritually in a variety of ways by the accident of our association with John. He in some ways was a reproach to our pride. Perhaps we needed it. The day of judgement will clear up a lot of things.

In the meantime, Rosella’s daughter, Phil Gettings, began her high school course in St. Joseph’s Convent, Lindsay, where she continued for 5 years, 1928-33. After that she devoted a year to teacher-training in the Peterborough Normal School. Her brother Eddie spent several years at St. Michael’s College in Toronto, probably 1931-33. It was then that Rosella moved back to the Gettings farm at Uptergrove and Eddie discontinued college to help his mother. In the course of time Eddie took over the management of the farm and converted it into a first-class dairy farm with greatly enlarged acreage and new buildings, stock and equipment. He married Annette Duffy, a registered nurse, with farm experience. Besides being the mother of two children, Cathy now in high school and Edward about to start, Annette has been a great helpmate to her husband. Together they have worked to build for the future. And not for themselves only. They are public-spirited, Eddie served on the high school board, Annette was president of the local chapter of the Catholic Women’s League. They are a joy to the pastor by their co-operation.

Their ideas of building for the future have changed recently. They have come to think that the running of an up-to-date dairy farm when help is in short supply and very uncertain tends to become a sort of slavery. Accordingly they have recently sold the dairy farm, and built an attractive home on a suitable site in that area. They will solve ensuing problems as they meet them. In the meantime their home will be a nice place to visit.
Phil Gettings has taught school at Penetang, Phelpston, and finally for a longer stretch of years in Toronto, with a break of an exchange year in Edmonton (1948-49) after which she visited the West coast and the deep South. Phil relieved tensions of school discipline by driving golf balls down a fairway and keeping out of the rough, as well as by occasional safaris to Bermuda and the Caribbean. Her final school years were given to library supervision, but she loved best of all the role of teacher. Indeed she finally married a teacher of many-sided interests and skills, Olaf Ulrichsen, co-ordinator of technical education in Peel County. They live in an attractive home in Peel Village at Brampton.