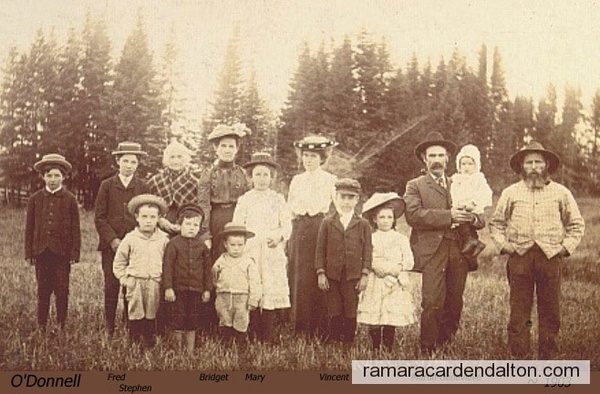 Schepeler was a little station on the Grand Trunk Railway. It was located on the seventh concession, three miles north of Brechin. It was named after an early official of the railway. The daily passenger trains, two each way, made it convenient for the farmers in the area to go to various places for shopping or other business. Eggs, milk and vegetables were shipped from there to Toronto or Orillia. The station was a great gathering place for people. Once in awhile strangers would get off the train at Schepeler. They might be going to the Kenny farm for their two week’s vacation or to a cottage at the lake. Periodically a very important looking gentleman would get off the train, namely, Andrew Prince. He had curls to the shoulders, a silk top hat, white gloves and a shillelagh. He arrived to spend a few days with Jack Corrigan and family.

You would never see a jollier bunch than the group that gathered at the station to meet the evening train. As soon as the farm chores were completed an assembly of young and old went to the station. Some of the young folks would play games while the adults carried on discussions about local or world problems. A few of the farmers subscribed to the Toronto Daily Star, which arrived on the evening train, and it supplied the people with many things to talk or argue about. Mick McLean, with his white beard, game leg and cane, was quite a philosopher. He liked to argue and he knew what he was arguing about. Sometimes he would point the cane at someone and clinch his argument by saying, “I can show you in the Bible that I am right.” Again they might have a sing song while waiting for the train. Eddie Kenny would sing, “I had but fifty cents;” Jack Corrigan, “It isn’t because your hair is curly;” John Kehoe, “Nineteen years old; “ and Bert Kane, “The preacher and the bear.” They all had fun with their songs and story telling. There was a long wooden platform in front of the station at it was raised about four feet above the ground. While the singing and discussions were going on, you might find some of the Corrigans, Kennys, Egans and other young people hidden under the platform taking a drag on the old cigarette, usually made of cedar bark or a horse-whip stock. That old station, in spite of its mosquitoes, was a wonderful place for the philosophers, farmers, and pranksters to meet.

Alas Schepeler station is no more. The Grand Trunk and the Canadian Pacific tracks have been taken up. The old station has been removed and now cows and sheep graze peacefully on the property. Such is the way of progress.