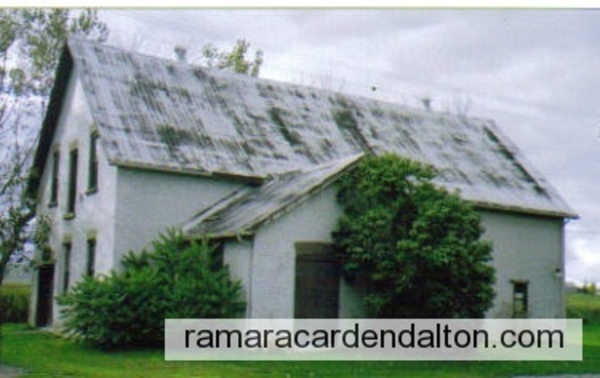 Record In The Rocks

Fifty Million years of Carden History
Fifty years ago, as Carden plowboy I stood on Eagle Rock and scouted for buffalo or Injuns and dreamed the dreams of a child. Today as an old man I stand on that same rock and think– after fifty million years, it’s still home to me

Fifty million years ago the Pacific Ocean rolled over Victoria County and lapped against the south side of the granite rocks around Uphill. Carden was underwater. If our ancesters had been here they could have sailed back to Ireland by going straight west ,over Alberta and British Columbia .(most of Europe and Asia was still under water) If they had sailed East they would have seen volcanoes in New Brunswick and Nova Scotia.
The granite hills of Dalton and Haliburton are among the oldest in the world.(If you are sitting in the Tim Hortons in Minden ,that granite rock in front of you is fifty million years old) The only living creatures were mollusks (snails and oysters) –some fifteen feet long . Great Rivers from the north brought silt and mud south to Carden where millions of years of heat and pressure created the famous “Carden Limestone”
In a later epoche(a few million years) southern Ontario and the western provinces had risen above the water and Carden was never again submerged As the water receded giant ferns (sixty feet high) and horse-tails ninety height covered the landscape. Clubmosses actually grew five feet in diameter and one hundred feet high. Some forms of fish and insects were abundant Another couple million years –in the Jurassic period—huge reptiles ruled the land. In the lakes swam forty foot lizards and on land waddled monstrous dinosaurs .while flying lizards patrolled the skies .There is no doubt these creatures were in Carden but erosion in the next fifteen million years has erased any trace By the end of the Eocene period there was a complete disappearance of giant reptiles. All this time Europe America and Asia were still connected

In later periods North America took on its present shape. In Victoria County the soft sand stone between the hard Black River and Trenton limestones eroded leaving precipitous cliffs of limestone. These limestone cliffs are most noticeable four miles north of Lindsay and six miles south of Kirkfield . The bend in the road south of Kirkfield is part of this precipitous cliff. If you look to the east the old CP railway went around this ridge on its way west to Lornville Gamebridge and Brechin. The Black River cuesta (cliff) is that thirty foot drop as you enter Coboconk from the south

The river systems of long ago were completely different than today The Scugog River once flowed south, the Niagra river once flowed over Fenlon Falls and Rohallion stood on a bay of Lake Algonquian ,Carden, Horncastle and Uphill were on the north-western shore of the same lake. 30,00 years ago woolly mammoths roamed the plains of Carden and herds of caribou pastured between Omemee and Kirkfield. As the ice receded the land rose and tilted to the south, the rivers reversed to flow into Georgian Bay and native hunters stalked the fury beasts on the rocky plains of Carden

If you stop and look you can see this history–the shallow Pacific layed down the first sediment for Carden Limestone on the Cameron Ranch –all that soil of a million years was scraped off the limestone by the advancing glaciers.— the Niagra River valley can be seen north of the Portage Road Those individual extra large granites you see here and there were pushed there from Digby or Dalton Townships by the glaciers— Where there is gravel, it was an island or shoreline, where there is sand, it was a sand bar in a river, where there is good soil, there was a lake bottom and everywhere the Pacific mud hardened to form what is know as Carden Limestone

Fifty years ago this Carden plowboy stood on Eagle Rock and scouted for buffalo or Injuns and dreamed the dreams of a child. Today as an old man I stand on that same rock and think– in another fifty million years, it will still be home to me