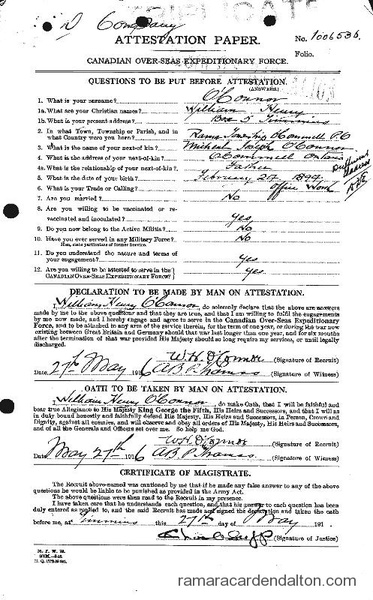 Another Carden Trajedy
As told by Frank Ftizgerald

This is the story of John Fitzgerald’s murder in Carden also told to Mary, Deanna and I (Jennie) last year:
John Fitzgerald (son of Patrick & Catherine) was shot by a Charlie Laroche. One time when Danny & I were at the Victoria Road Cemetery we met a lady tending graves. She said her father knew John Fitzgerald and he never felt it was an accidental shooting. Charlie Laroche left Carden after the shooting – possibly went to the States. She said Charlie’s mother was so distraught over it all she committed suicide the next year. Frank & Jennie Fitzgerald hadn’t heard that the mother committed suicide, but Frank said he was told Charlie had a bad temper and nobody really knew what happened the day they went out with the guns. However, Patrick Fitzgerald (Frank’s grandfather and John’s father) told Charlie never to come back to Carden or he would have the police arrest him.

One story said Jojn Fizgerald took the box of shells and ran out ahaed. La Roache yelled stop or I’ll shoot then pulled the gun to his shoulder.
Like most tragedies the rest is speculation.