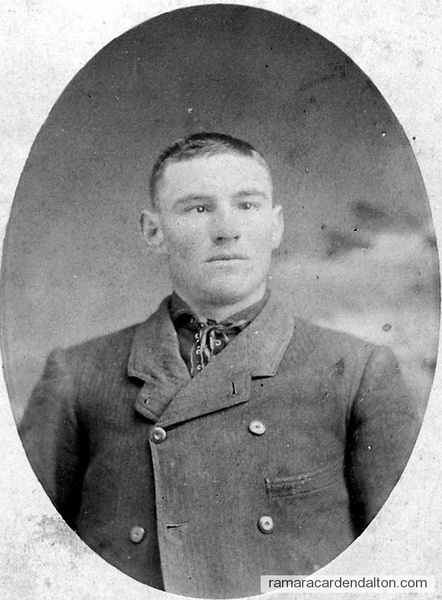 WM Smith (1840) and Hannah (Brown) now in Udney Cemetery in the front row moved to Udney, Ontario along with their several sons and daughters. Fred, was my grandfather, father of Donna (Donelda June). Each son received a parcel of land in the area and farming on their properties was a shared labour experience. Along with friends, neighbours barns were raised and fields cultivated and harvested. It was a good life and for the most part their lives were long.
My grandmother passed away June 30, 1950 on my birthday. I was just a little girl. I remember with the help of family, that she grew prized flowers and sold them to the funeral parlour for extra money. She kept a spotless house with a shiny cook stove and gleaming walls. She washed so many boards (wainscotting) in the kitchen a day so that within one week, the entire kitchen was thoroughly washed.
They had an abundance of cats which my grandfather Fred loved. Only one, a single white one Hannah loved, was allowed inside. Once they were overun with kittens and Hannah told Fred to take them to the pond. He hated to do so but rowed to the center only to have them swim back to shore. He never took them out again.
Grandpa Fred has two horses one named Dan. The helped till the fields and were his friends. He also had a Collie named Bob who we all cherished. The Judds lived across the road though I can’t locate the farm anymore.
My mother, Donna was adopted when she was a small child. The fact that Fred was in his 50’s and Margaret in her 60’s didn’t seem to matter to them.

After Margaret died, Grandpa came to live with us. I was so fortunate to grow up with his stories of Indians coming into their home in the dead of winter to keep warm, the sound of the train when it came through the area and what it meant to them, the community church and the wonderful neighbours. I’m in the States now and when I hear of the Civil war that ended here in 1865, I’m struck by my connection through my grandmother of being born just a year later in 1866. It really wasn’t ‘that’ long ago. People say your sense of age and history begins from the day you were born and the past seems so long ago but it is really not. I feel so privileged for being able to spend so much time in the Udney area at the farm, play in the fields, feed the animals and meet the neighbours. Times of yesterday so real in my heart.

Note: I would love to hear other’s stories, those who lived in the area and perhaps or perhaps not, knew the only family I’ve ever known Good Idea–Submission Committee