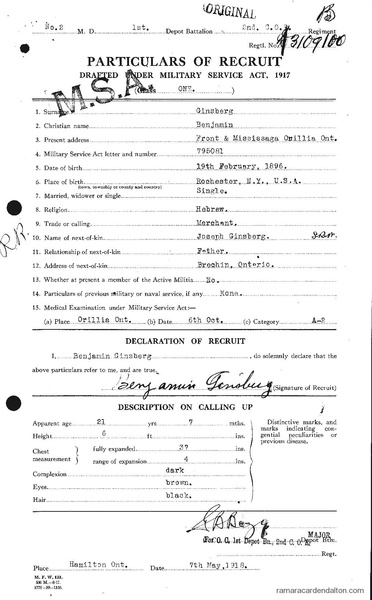 This Articule from Carden correspondent Frances Laver FIRES OF 1881.

A letter from MR. J. D. Gray, a gentleman employed at Messrs. Kean and Sons tailoring establishment, Orillia, reveals a sad state of affairs in the vicinity of Sebright. Mr. Gray left town to visit his home near there. He found the whole country round under the way of a fiery demon. Upon arriving at his house, no person was to be seen, wife and family having had to fly before the approach of the flames and for all he knew had fed them with their bodies. The furniture was packed up as if some effort had been made to save it. After waiting until the following morning. He found his family safe. The whole district is ablaze. Houses, barns, fences, cattle and the entire grain crop have been licked up and a charred and blackened country tell a tale of suffering which is now only begun. Not till winter will the settlers cup of bitterness be full. Then when starvation meets him and with home and property gone, he calls upon us for a helping hand, shall it be extended to him? A hard time is expected when snow comes.
Among those who have lost heavily are; W. VanVlack, lost barns and crop’ G. Cleavely and Mr. Johnston, who live to the west of the last are burned out. To the north, Messrs. Joslin, Kehoe, Oxby, Sanford, Fleming and several others have suffered…. Farmers have left their crops to burn believing it to be just as safe as in the barn or stacks. The fire is the largest one ever known in this country and the damage done cannot at present be estimated

Orillia Times August 25, 1881
RAMA Bush fires quite prevalent throughout this township and parts of Mara. Everyone is praying for rain. It is said that Ryde is covered with fires and the Township of Longford id threatened. The Georgian Bay Lumber Company own extensive land in Ryde.
Orillia Times September 1, 1881.

These townships are being fearfully scorched with the devouring elements and the whole people are and have been during the past two weeks fighting fires……, trying to save themselves from utter ruin The harvest which has just been reaped and promised so well is in the greatest danger of being swept away if rain is not forthcoming. The people are in great distress and the cattle are suffering and in some cases dying for want of water. On Thursday last Mr. Charles Taylor, of North Rama, just as he got to the last load of grain his stack was ignited and consumed his whole stock and buildings and it is said he has no insurance. He has the sympathy of his neighbours and we hope it will assume a tangible shape. While many have to mourn over the loss of their property, the saddest occurrence of all is the accident which happened to William Campbell son of Mr. George Campbell, a very fine young man, who was battling with the devouring element was struck by a falling stub, breaking his spinal cord, thus disabling him for life. Edward her, Sebright, lost with other things, 20 tons of Hay. William Barnes had his barnes and contents destroyed. Edward McNabb had 10 tons of hay swept away..

No rain has fallen here for six weeks and the fires had greatly increased on Monday. Every day adds to the list of unfortunate farmers who have lost their all, in the majority of cases having no insurance on their buildings and in all cases, none on their grain. during service at the Presbyterian Church, Sunday, an alarm was given that the fire was coming through the woods north of the village and a great portion of the congregation left the church to fight the flames. Before their arrival the fire was across the woods and had enveloped two barns which were full of grain and the dwelling of C. McDonals and had spread very fast. A great many lost all their property. About twenty five families have been left destitute in the district since last Monday and aid is being asked for them. Never has North Ontario been so scouraged with fires and drought as at the present. Now the wind is blowing strong from the northwest and the smoke is shifting, which with the heat, cinders and ashes are almost unbearable. It was dark a 4:45 pm. Prayers were offered up at all the churches Sunday for rain but there was no appearance of it yet and we fear the worst is to come..

UPTERGROVE We did not write you last week as the fires were so fierce between this place and your town as to almost cause us to despair of our letter reaching its destination in safety. It is quite unnecessary for us to enter into a graphic description of how the fire fiend raged, leaped and grievously annoyed the good people of this locality. As it would be a repetition in miniature of what is the general thing throughout the province, not to speak of the appalling and devastating fires of Michigan which have burned whole townships and over a thousand human beings. telegraphic reports from all quarters painfully reveal the fact that Mara and Rama are not the only townships in which the devouring element with all its concomitany grievances, is raging in all its destructive fury. Very little actual loss has been sustained in the neighbourhood owing to the indefatigable exertions of the people who turned out en masse to fight the flames and so nobly did they perform their duty that the indomitable monster was well kept in bounds until a timely assistance of the rain on Saturday night, which although it fell in small quantities, did the world of good..

RYDE Bush fires are raging here to an alarming extent, sweeping across the clearing with terrible velocity, consuming everything in its course. A considerable quantity of hay was consumed and it is feared, by the roaring flames and dense smoke aided by high winds that some of the farmers of Ryde will suffer severely. Immense damage has been done in the south west of draper, three families it has been reported has been burnt out of house and home, Paul Wise, Peter Buck and a man named Brunner. Fences have been consumed by thousands and the field left black and bare. A fearful tle remains to be told..

THE FIRE IN DALTON. MARA AND RAMA
A letter dated from Sebright, September 12, 1881 says. The bush fires have been raging for the last month in this vicinity, but until lately have done little damage beyond the destruction of timber. About two weeks ago however, they began to assume a serious aspect, and some hard fighting was done to save the mill belonging to Mr. M. Revel, and the building of W. Barnes and A Reid. These were several times on fire but the strenuous efforts of the neighbours succeeded in quenching the flames. A few days later the fire appeared behind the building of Mr. C. Taylor and he and Mr. W. Campbell were endeavouring to prevent it running across the fields, a tree fell on the later, striking him between the shoulders and knocking him senseless to the ground. The parties who were watching the barn at once rushed to his assistance and carried him to the house. They had no sooner done so than the barn caught fire and burnt to the ground. W. Campbell lies in a precarious condition and little hope is give to his recovery. He subsequently died.
These catastrophes were small, however compared to those of Wednesday. Altogether a day which will long be remembered by a great many of the settlers of Rama and Dalton. A strong gale sprung up in the morning and continued with unabated fury during the day. In the forenoon there was little perceptible increase in the fires, but soon after noon a dense smoke was observable towards the northwest, which continued to increase until the very light of the sun was darkened and the surrounding objects assumed a yellowish hue. At a distance of two miles the roaring flames and the crashing of fallen timber could be distinctly heard. In an almost incredibly short space of time the fire reached here. Its appearance as it swept through the swamp to the north of the clearing was something terrific and altogether beyond description. Sheets of flame waved above the trees licking the tops of the tallest pines. The roads formed no barrier; tongues of flame reached across them and fired the trees on the opposite side. The settlement to the north was completely shut off , in fact each individual settler was imprisoned in his clearing, shut off from escape or help, had there been any one who could have left his own place to render such. Mr. Peter Barnes fought hard but unsuccessfully to save his buildings but besides having to contend with blinding smoke , he had little water. House, barn, fences, his cattle, sheep and pigs were burnt. It was only by sprinkling themselves with water when they caught fire that they saved their own lives. They lay in a field all night, scarcely able to breathe and blinded by the smoke. The horses saved their lives by closely following their master and lying down beside him all night.
Mr. J.D. Gray’s was almost a parallel case. His family lost everything except the clothes they wore. Rumours reached here during the evening of the burning of a Mrs. McDonald and her son. As their clearing was completely shut off by the fire, the authenticity of these reports could not be ascertained and much anxiety was consequently felt.

This from the Horncastle shool history:

Inspector Reazin’s report of 1880 described S.S. #7 as a log school having 27 pupils and teacher’s salary $204.00 – Teacher’s Certificate-3rd Class. His December 1881 report contained the following: “All our northern townships have suffered from recent bush fires. The desolate appearance of some of the burnt districts surpasses anything I had ever imagined. In some localities everything visible for miles together has the charred appearance of a newly burned fallow. Many children in these localities will be unable to attend school during the coming winter unless relief is afforded for the want of shoes and proper clothing. Many of the children at present in attendance have the appearance of suffering from cold and hunger. In 3 sections No. 3 Dalton, No. 7 Carden and No. 8 Bexley the school houses were burned. I would most respectfully recommend that a grant be made by your council to the trustees of each of these sections to assist in rebuilding their school houses.”